Got some 3D glasses handy? Check out this awesome view of a very strange feature on Mars, courtesy of Mars Reconnaissance Orbiter's Context Camera (CTX). Actually the view is pretty great even without 3D glasses. The whole image covers an area about 60 kilometers wide. Many thanks to Tanya Harrison and Ken Edgett at Malin Space Science Systems for these beautiful pictures!

Put on red-blue glasses to enjoy this view of Olympica Fossae, a set of channels incised into the plains east of Olympus Mons and south of Alba Patera.

We are looking at Olympica Fossae, a feature I first noticed when I checked out Google Mars for the first time in February. As its name suggests, it is somewhat near Olympus Mons, but not very; the peak is about 1,100 kilometers to the west. It is actually slightly closer to another enormous Martian caldera, Alba Patera, which is about 900 kilometers to the north. If the 3D effect isn't working for you, try moving your face farther from the screen; when 3D images are downsized, the separation between the two color channels becomes less, and you have to trick your brain into picking out the topography as though the image were proportionally farther away from you.

What is Olympica Fossae? Well, let's begin with the obvious. There are channels of some kind, ranging in width from about 200 to about 3000 meters. You can tell from the fact that there are layered rocks in the walls that they are (at least in some places) incised into the bedrock. From the streamlined islands and other distinctively fluvial features you can state that there was certainly a fluid involved in shaping these channels. There's also clear evidence of a change (decrease) in the rate of flow with time; you can tell that from the fact that there is a small channel incised into the floor of the widest channel.

But there are other things that just make no sense. There's a whole ghost landscape of subdued channels that looks just like the main set, only flattened somehow. There are weird squirrely side channels that decompose into sets of collapse pits that cross the main channel at high angles, for starters. Let's zoom in on a section of the left side of the above image: 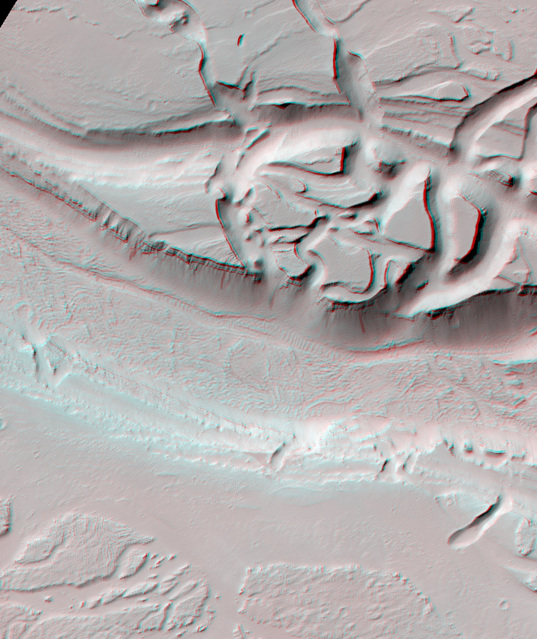 You can see the main, wide channel, and a side channel, with a streamlined plateau between them. But the plateau itself is just bizarre. It has all these weird loopy channels that cut it crosswise, and I can't convince myself that those crosswise channels have anything whatever to do with the big main channel; I think they were there before, and had some other cause, and then some major fluid flood splashed across this landscape, carving the big channel that crosses it from left to right, blasting through all the preexisting channelized landscape, cutting them off willy-nilly.

Before I continue analyzing the landscape, check out something cool in the detail image that has nothing to do with whatever made the landscape. If you look at the sloped southern face of the plateau, you can see several dark slope streaks running down the walls; slope streaks are thought to represent dry falls of dust, and they happen on Mars regularly. If you're wearing your 3D glasses, look at the slope with both eyes open, then cover the right (blue) eye with your hand. You'll now see a red image without 3D that has fewer slope streaks. Anaglyphs are made from two photos of the same area taken with the spacecraft looking at slightly different angles. That, of course, means that the images were taken on different dates, possibly many months apart. The red image was taken before the blue one; some new slope streaks formed in the time between the red and blue images. Cool!

OK, now let's look at a second detail image, this one from the right side of the original one. 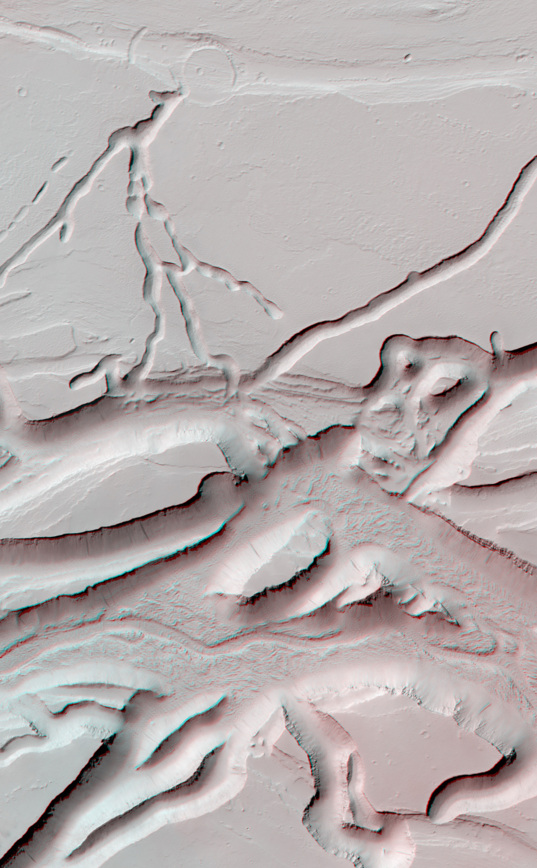 Look at that weird, digitate set of channels in the top of this detail view that appears to terminate (originate?) at a ghost crater near the top of the image. They have curvaceous sides; in some places they look like a chain of pits. These weren't carved by a fluid flowing across the surface; they collapsed into underground voids. My impression from staring at the cross-cutting channels on the left side of the image (in the first detail) is that the north-south channels happened before the big main channel cut across them. Looking at this area, though, I'm not so sure. One claw on the hand-shaped set of channels that reaches down toward the main one actually seems to cut down across the terraced side of the main channel.

If you didn't follow that, my point is that I just can't figure out the order in which events happened in this area. It's complicated. Which is fun, for geologists. The Context Camera (CTX) on Mars Reconnaissance Orbiter has wallpapered this region with photographs, which will make the data set that is needed for figuring out the order of events. For that purpose, CTX is actually much more useful than HiRISE. How can that be, you might ask? CTX gets only 6 meters per pixel, while HiRISE can take images up to 25 centimeters per pixel, a resolution 24 times better? To comprehend what's going on at Olympica Fossae, in channels that are more than a kilometer wide, you don't need 25 centimeters per pixel. What you need is areal coverage, and CTX is a much better tool for that than HiRISE.

You've probably noticed that I never specified what fluid I think flowed through these channels. That's because I don't know. Water? Maybe, but not necessarily. There's absolutely no evidence it ever rained here -- these channels have no tributaries. The water, if that's what it was, came from some other source and flowed away some place else. If not water, then what? Superheated liquefied mud? Some peculiarly inviscid lava? I don't know!

This is a rare 3D post for me. There are lots of opportunities in space science to post 3D images, but I know that not all of you have 3D glasses handy, and I want my blog posts to be accessible to as many people as possible. I would appreciate feedback (feel free to comment here or send me an email) on whether you'd like to see more 3D or if you find it irritating because you don't have 3D glasses and have no plans to procure any. I will say that I have become much more interested in 3D images since a friend at JPL gave me a spare pair of comfortable-to-wear, plastic-framed 3D glasses. I can stare at 3D images for hours with these things on; they stay on my face and there are no "ghosts" as you often get with poor-quality glasses. A little Google searching shows me that these things really aren't expensive; this site for instance has them for $6 per pair (plus shipping; I'm talking about the ProView red/cyan ones). If you like 3D space images, it's well worth finding yourself some real 3D glasses! 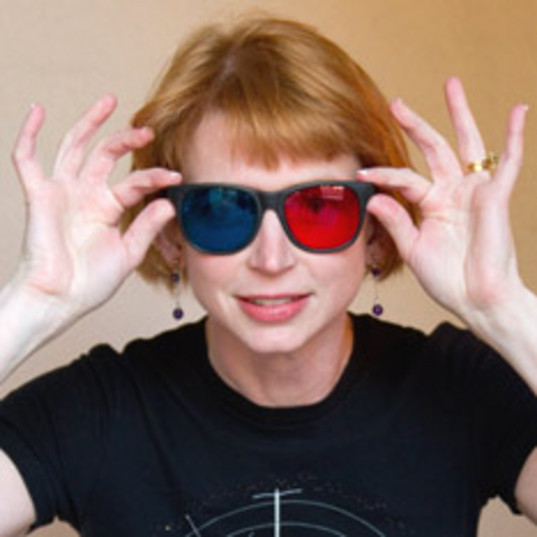