I've reported before about the detection of water on the surface of the Moon by the Chandrayaan-1 orbiter and the Deep Impact and Cassini spacecraft, but what I'm about to tell you about is actually more exciting: the direct detection of water in the lunar atmosphere by the Chandrayaan-1 Moon Impact Probe. The detection is reported in an article by R. Sridharan and coworkers in Planetary and Space Science.

First, a little background. Chandrayaan-1 was India's first (and, so far, only) interplanetary spacecraft (using the term "planet" loosely). It was launched toward the Moon on October 22, 2008 and entered orbit on November 8 of the same year. Along with its ten science instruments it carried a Moon Impact Probe (MIP), which was released on November 18, 2008 at an altitude of 100 kilometers from a position over the equatorial nearside. Over its 25-minute descent, the Moon Impact Probe gathered data with three instruments: a radar altimeter, a Visible Imaging Camera, and Chandra's Altitudinal Composition Explorer (CHACE), a mass spectrometer. CHACE gathered a total of 650 mass spectra during the 45 minutes that it operated, from 20 minutes before probe release until 15:01 UTC. During the descent, the Moon Impact Probe flew from north to south, eventually impacting the Moon near the south pole and the crater Shackleton.

The Chandrayaan-1 Moon Impact Probe carried three instruments, one of which was a camera. Because the Probe spun as it descended, the camera images also rotated, making it something of a challenge to mosaic the images. This mosaic was created by space geographer Phil Stooke by grabbing frames from a video of descent images and overlaying them on a Clementine mosaic.

There is clear evidence for the presence of a substance with a mass of 18 atomic mass units -- assumed to be water -- in every CHACE spectrum. As the Moon Impact Probe descended and flew southward, CHACE saw the amount of 18-amu substance increase fairly steadily. At about 70 degrees south latitude, however, the abundance leveled off and actually declined steadily until the Moon Impact Probe struck the lunar surface at about 85 degrees south. 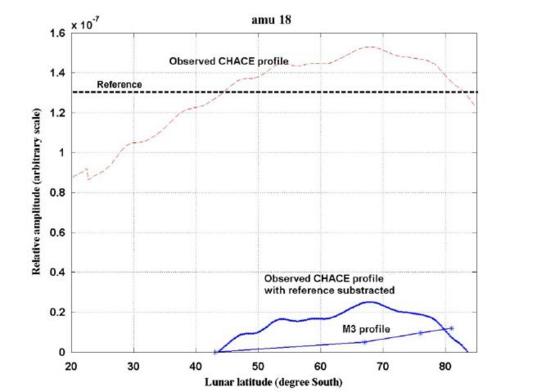 This figure depicts the latitudinal/altitudinal variation as observed by CHACE from 20 degrees south to the poles highlighting a steady increase in the H2O concentration that maximized around 60-70 degrees south latitude. The relative concentration of water-ice as detected by M3 depicting the steady increase in the concentration as one moved towards the poles. Treating the latitude of 43.1 degrees south as the reference beyond which M3 had started detecting water ice, the relative variation of H2O as seen by CHACE is also depicted highlighting the complementary nature of the measurements from CHACE and M3.

The fact that water was detected in every CHACE spectrum is a bit of a worry; one has to wonder about contamination within the instrument. Thus most of the content of the article consists of arguments that the detection of water is real. The main argument is that if there is any water being detected by CHACE, you would expect CHACE to detect a constant level or, in the worst case, a continuously increasing or decreasing level. The fact that CHACE detected first an increase and then a decrease in the amount of water in the lunar atmosphere is interpreted as evidence for the detection being real.

CHACE directly samples the tenuous gaseous atmosphere while M3 looks for water ice on the top layers of the lunar regolith. If the water ice acts as a source due to, say, sublimation, which would be a strong function of temperature in the prevailing ultra high vacuum condition, then, in the absence of fresh sources during the measurement phase, the increase/decrease in the concentration measured by CHACE should be at the cost of what M3 has detected in the form of ice.

If you want to read more about the Moon Impact Probe, Pradeep Mohandas has a nicely illustrated blog entry about the descent and impact.