Yes, I'm totally not kidding, that is the headline in the Sun: "'Gorilla' seen in Nasa Snap from Mars." The article goes on to quote a Mr. Nigel Cooper, "who has studied thousands of photos taken by Nasa rovers and posted online" as saying that "It's definitely a creature of some sort."

Riiiiight. You and I both know this is just silly. But there are lots of people out there who do not, so I am grateful for the efforts of Mr. Doug Ellison to combat the silliness of his homeland's newspaper. Here, for your consideration, is proof that it's really not a gorilla, it's just a rock! And a well documented one at that. 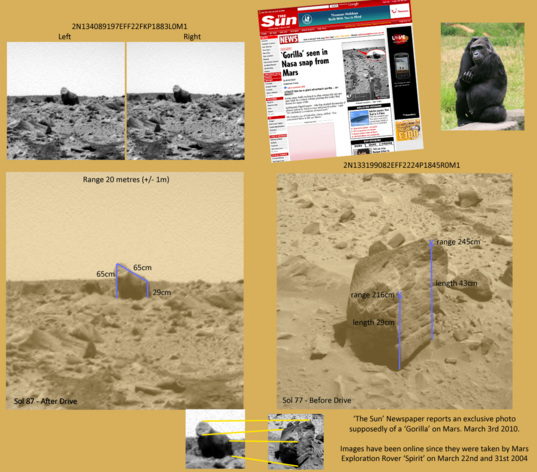 Contrary to the report of the quality publication Sun, that rock is not a gorilla.

Not enough pictures for you? Here's more... 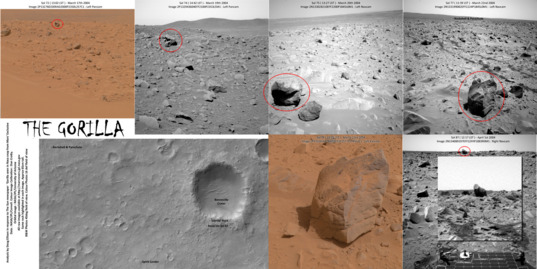 All the 'gorilla' pics

The "gorilla" turns out to be a very well-documented rock from early in Spirit's mission to Gusev Crater, Mars. (Note: the "click to enlarge" version is half the original resolution; go to unmannedspaceflight.com for the full-resolution version.)

I don't post this just to joke -- one question I get asked by scientists who are concerned making image data more accessible to the public is, don't we risk more of these stupid hoaxers and conspiracy theorists finding all kinds of bizarre things (gorillas! Bigfoot! Jimmy Hoffa!) in the pictures? The answer is, probably, yes -- but you are also making the images more accessible to people who are really really happy to use their time to find every last picture of this object and give all the sane people on the Internet the information they need to be convinced that, no, it's really a rock.