Your chance to shoot your own high-resolution pictures of Mars

Space missions are publicly funded, but they're not publicly operated (for obvious good reasons). Still, wouldn't it be cool if you got a chance to drive a spacecraft? For three years, the Mars Global Surveyor mission allowed members of the public to suggest targets for imaging by the Mars Orbiter Camera (something I discussed in this post), but since we lost Mars Global Surveyor the public has not had a similar opportunity.

At last, Mars Reconnaissance Orbiter is following in Mars Global Surveyor's footsteps. The HiRISE camera team today announced HiWish, a mechanism by which the public can suggest imaging targets. Their invitation states:

Ever wanted to know what a particular patch of the Martian surface looked like at 30 cm/pixel? Let us know where that patch is, we might take a picture of it.

The HiRISE public suggestion tool, called HiWish, is a Web site that allows you to log in and select a spot on Mars as a suggestion for where the HiRISE instrument should take an image.

If you don't have a particular location, you can use the HiWish site to browse around the planet, examine the locations of other data sets, and find a place that should be imaged. It will be put into our targeting database, and may get selected as an upcoming observation. Furthermore, the HiWish site allows you to track your suggestions and be notified when one of your suggestions gets taken.

Cool! So let's see how it works, shall we? I clicked on the "Get Started" link.

You need to register, which is simple enough; they collect your email address and give you the option to be notified when the images you have asked for are available. They also ask for some optional demographic information on your education -- that'll make for some interesting statistics. I would love to see a ClustrMap on this page!

Once you log in, you get a page describing "How It Works."

I clicked "Create a New Suggestion." A new page opened up with several dialog boxes and a map of Mars. You are asked to find a spot on Mars to image, give your image a title, and state a science rationale. OK, so here's the hardest part: what do I take a picture of?

Well, for me, my first suggestion is pretty obvious. I have exactly one peer-reviewed paper to my name, describing a stratovolcano-like feature on Mars. It had a stratovolcano shape, symmetrical with a central flat-floored crater at its peak, but it could just have been a chance shape carved by numerous impacts and not a volcano at all. I won't say it was a great paper, but it's my only publication. So it would be awfully neat to get a photo crossing this feature. I'm not quite sure what I would expect to see -- maybe some structure in the rock faces on its slopes that might tell me we really are looking at volcanic deposits, rather than just busted up old Mars regolith? 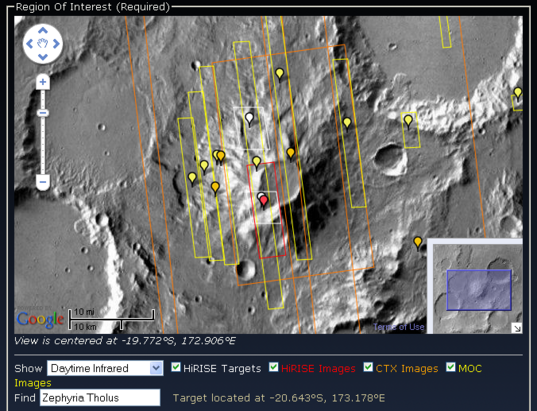 So, first, I need to go dig up the publication, to make sure I recall the place names and locations correctly. (Um, OK, let's be honest. I forgot the name of the volcano and had to look it up.) It was in the Journal of Geophysical Research, Stewart and Head, 2001, "Ancient Martian volcanoes in the Aeolis region: New evidence from MOLA data." The name of the feature I was describing was Zephyria Tholus.

So, back to the HiWish page, and I type in Zephyria Tholus, and, knock me over with a feather, they've already taken a HiRISE photo of it; and there appear to be three more targeted, one of which will no doubt provide stereo coverage. Cool! I need to go check those images out! But dang! Now what am I going to suggest? I think of a few more things I'd like to take a look at, but it doesn't take long before I conclude that anything specific that I can think of to image has already been specifically thought of. That's no surprise -- the reason we know any place is cool is generally because someone already took a picture of it, confirmed that it was cool, and wrote something about it. It's a bit of a chicken-and-egg problem. On the map, you can turn on layers representing the locations of images already taken by HiRISE (red boxes), by MOC (yellow boxes), and CTX (orange boxes), and where HiRISE images are planned (white boxes), and though the coverage is far from complete, of course the images have been targeted at many things that anybody thinks is interesting. We need to find something to target that nobody has thought to image yet!

I go back to Zephyria, remembering that in my paper, I identified a few other features near Zephyria that looked somewhat similar, but were more substantially battered by later impacts. It would be interesting to see if these features share any qualities with Zephyria -- is it a second stratovolcano? One of them has had a flank sliced off by an impact crater -- could the wall of that crater contain a slice through the strata? So I called my suggestion "Domical feature near Zephyria Tholus" and gave the following science rationale: "Zephyria Tholus is a possible stratovolcano in Mars' southern highlands. Stewart and Head (2001) used MOLA topography to identify several other nearby features with similar slope and elevation. This one, feature 'C4' in Stewart and Head Plate 1, has been cut by a later impact crater, which may have exposed its interior. The presence of layered deposits would argue for a volcanic origin." In the "special notes" field I noted that the flank of the structure, rather than its peak, would more likely expose bedrock. "Volcanic Processes" was the obvious Science Theme to suggest. Here's what the screen looked like when I was done: 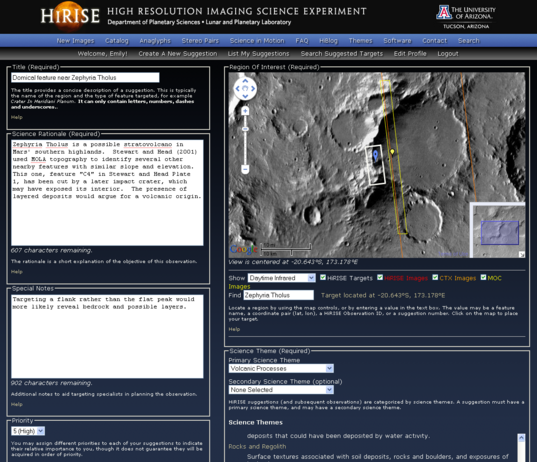 HiWish is a web interface where members of the public can make suggestions for future image targets for the HiRISE camera on Mars Reconnaissance Orbiter.

I clicked "Continue" and "Create Suggestion" and I was off! Of course, I've got no idea if the HiRISE team will find my suggestion compelling. So let's go off and try out a few more suggestions. Since my searches on specific targets all turned up places that had been imaged numerous times, I decided just to browse the map. I found myself desperately wishing for place names. I had to work between the search page, my NASA Atlas of the Solar System, and the Mars Globe iPhone app to figure out whether the features I was looking at were named or not, and, if so, what they were called. I picked out a channel in the southern highlands in a region that was far from any other HiRISE shot where the channel ran parallel to the MRO orbit, so that the image could capture as long a reach of the channel as possible. I browsed around some more and found the region containing the massive Simud, Tiu, and Ares Vallis outflow channels, which seemed sparsely covered by HiRISE; I picked out a cool looking side channel to Ares Vallis that had higher elevation than the valley proper -- maybe it represented an early phase of Ares flooding? -- and some neat looking dissected topography within Ares' floor nearby using the "Clone This Suggestion" feature.

So, there are my four suggestions. All in all, the interface was very, very easy to use, with the comment that having place names on the map would make things even easier. Let's see whether the HiRISE team likes any of my suggestions! Can you come up with better ones? Visit the HiWish page and give it a try!