We have three orbiters and two rovers currently exploring Mars, each of which returns breathtaking photos on a daily basis. (Well, Mars Reconnaissance Orbiter hasn't been returning photos for months, but yesterday I learned via Twitter that the spacecraft is out of safe mode, and the HiRISE camera was powered on; I assume this is true for the other instruments as well.) So you may be nonplussed to see me post an image from what is, without any doubt, the lowest-quality camera in Mars orbit. But Mars Express' Visual Monitoring Camera (VMC) does what no other Mars orbiter can do: take snapshots of the entire planet at once. What's more, ESA's flight operations team has set it up so that these photos, taken in sessions a few times a week, get posted to the Web within days, sometimes within hours of their capture. There isn't a lot of scientific use to these images, but they are so cool as an outreach tool. Visit the VMC website a few times a week and you'll see Mars Express' view on the planet shift with the seasons, and you'll learn, intuitively, that Mars Express is up there working hard every day to return more science data from the Red Planet. 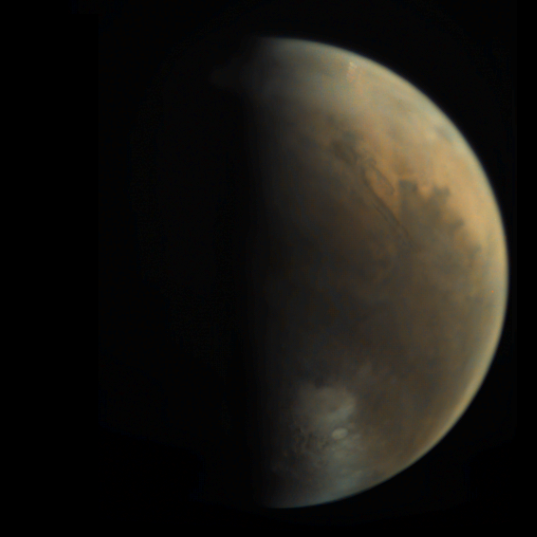 This photo was taken on September 17, 2008, when Mars Express' orbit was positioned so that its apoapsis -- its farthest reach from Mars -- was over the high latitudes of the southern hemisphere.

It was hard to select just one of the VMC images. This one was taken on September 17, 2008, when Mars Express' orbit was positioned so that its apoapsis -- its farthest reach from Mars -- was over the high latitudes of the southern hemisphere. It was also midwinter in the southern hemisphere. So you see seasonal frost surrounding the south pole; the polar cap is in winter darkness. The frost is especially bright within Argyre Planitia -- an ancient impact basin -- and the smaller, circular crater Galle the lower right of Argyre. (If you squint, you can just make out some of the features within Galle that make it look like a happy face.) To the north, you can just make out the outline of Valles Marineris and Candor Chasma, the smaller canyon to the north of and parallel to the main canyon. Most of the disk that we see is Noachis Terra, some of the most ancient terrain on Mars. To the north, high cloud hazes the view.

Day 15: Mars
Each day in December I'm posting a new global shot of a solar system body, processed by an amateur. Go to the blog homepage to open the most recent door in the planetary advent calendar!