I've always loved advent calendars and the way they both managed and heightened my anticipation of the gift-opening frenzy of Christmas morning. I can't wait to open the first window in this year's LEGO advent calendar with my three-year-old this evening. Today, the Boston Globe's Big Picture feature posted the December 1 installment in their second annual Hubble advent calendar, featuring one lovely image from the Hubble Space Telescope for each day until Christmas. So, since imitation is the sincerest form of flattery, I decided to flatter the Big Picture very sincerely by running my own advent calendar here at The Planetary Society Blog.

The theme here will be planets, moons, and smaller bodies of the solar system, and because I just had an article published in the January issue of Sky and Telescope about amateur imaging (on newsstands now!), I am only going to feature images that were processed by amateurs. And since we're of all denominations here at the Society, instead of counting up to Christmas, I'll count up to the New Year. Which lets me feature more places from the solar system!

The first image I've selected is of the star sapphire of the Saturn system, Dione. It's the fourth largest of Saturn's moons, about 1100 kilometers across, just another little iceball except for that fascinating system of fractures that looked like volcanic flows to Voyager scientists but which Cassini revealed to be bright, fresh fractures cutting Dione's surface. This image was produced from Cassini data by Gordan Ugarkovic of Croatia, whose other work can be found on his Flickr site and on unmannedspaceflight.com. 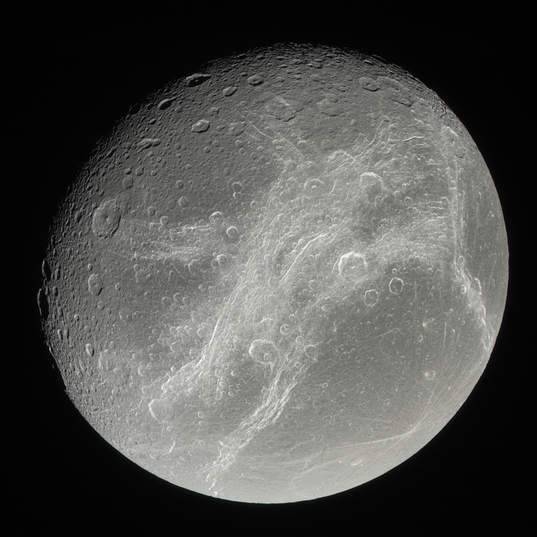 Dione's leading hemisphere is mostly dark except where it is cut by the so-called "wispy terrain." Cassini images like this one, taken on 24 July 2006, reveal that the wispy terrain, once thought to be possible volcanic flows, is actually composed of the bright, fresh, icy faces of tectonic fractures cut in to Dione's surface.

Each day this month I'll feature another of the diverse worlds of the solar system. Undoubtedly I'll show more of Gordan Ugarkovic's work, as well as others by amateurs you've seen me post about before, but if you have been doing image processing of your own and think you have something to show off here, please send me an email. I'm looking for photos that show the whole globe of the body, and which are, ideally, in natural or near-natural color. Please don't send large attachments -- if possible, host your image at a site online and send me a link, or just send me a thumbnail.Stay tuned to the blog to open up a door on a new and different world each day until 2010!