Wow, just wow. I didn't know what to expect from the second flyby of Saturn's geyser moon Enceladus in November, which happened yesterday. I knew the cameras were given control of spacecraft pointing during the closest part of the flyby, so that there should be some pretty cool photos of tiger stripes, but I have to confess I didn't expect anything tremendously different from the first high-res imaging flyby.

Well, I was wrong. Wrong, wrong, wrong. Cassini has sent back some of the most amazing images from the whole mission. I'm traveling now and not able to do much of my own image processing so I'm grateful to Gordan Ugarkovic for posting the following two stereo pairs of Cassini Enceladus images to unmannedspaceflight.com. They are both cross-eyed stereo: stare at the images, allow your eyes to cross so that the two images overlap in the center of your vision, then make your eyes focus on the overlapped pair, and it should (unless you are among the 10% of the population who are stereo blind) pop into 3D.

The first one is unimaginably amazing. I never, ever thought we would actually seenthe plumes where they issued from the vents. But with the dramatic side-lighting of polar autumn sunset, we can actually see them. Tremendous. This one's a keeper. 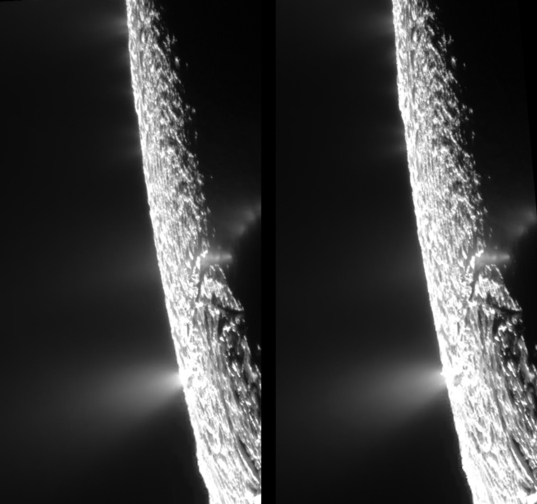 Cassini swept past Enceladus' south pole for one last close look before winter darkness swallowed the enigmatic tiger stripe terrain and gathered these dramatic shots of plumes issuing from south polar vents. This is a crossed-eye stereo pair -- stare at the screen and cross your eyes until the two images overlap, then allow your eyes to focus on the overlapped pair to see it in 3D.

The other one shows the vents in really eye-popping 3D. 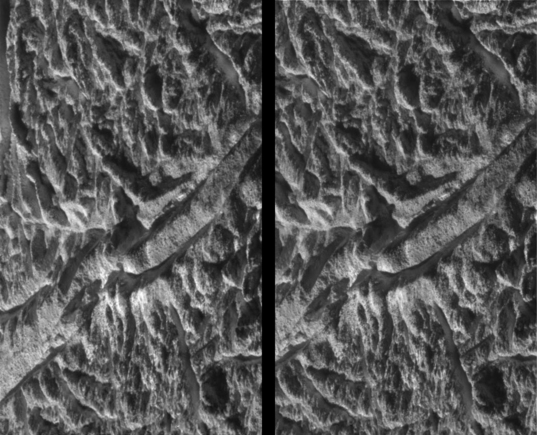