Carnival of Space #126, plus more from Jupiter's moon Io

The 126th Space Carnival is live over at Jason Perry's always-excellent (if rather narrowly focused) Io blog The Gish Bar Times. Actually I had been meaning to highlight a neat series of articles Jason put together commemorating the tenth anniversary of Galileo's death-defying "I24" flyby of Jupiter's volcanic moon Io:

I remember this flyby well. I'd just started my second year of grad school, and shared an office with Geoff Collins, now a planetary science professor at Wheaton College, and Louise Prockter, now a researcher at the Applied Physics Laboratory. At the time, both were finishing their Ph.D's working on the geology of the icy satellites of Jupiter as seen by Galileo. They were also involved in planning the imaging for the Galileo flybys, and were eagerly anticipating the I24 flyby, as it would be Galileo's first really close encounter with Io from which it could actually return remote sensing data. Well, when the images started trickling slowly back, their anticipation turned into perplexity. What on Earth (or on Io, I should say), was going on in this picture? 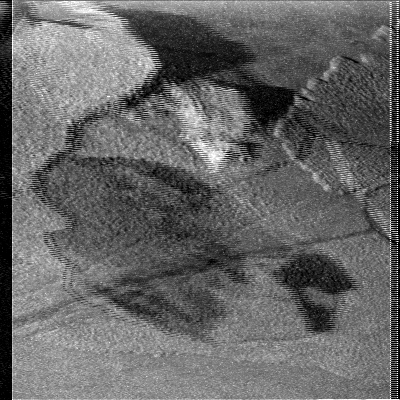 It was immediately obvious that something had gone wrong in the spacecraft computer. There were weird toothy edges on high-contrast boundaries in the images, the features in the images appeared stretched-out horizontally, and linear features appeared to cross right through each other. Geoff had a puzzle to solve, and he loves puzzles. It didn't take him very long to figure out the basic outlines of what had happened: we were actually looking at two images superimposed on each other. But Galileo's CCD camera wasn't capable of double-exposure, so how could there be two images on top of each other? Geoff figured out that it wasn't two separate images; it was the right and left half of the same image, sitting on top of each other. You could trace linear features that crossed the image, exited at one side or the other, and reappeared on the other side of the image. Not long after that we got the official explanation of what had happened: an error in Galileo's computer caused by the nasty radiation in Io's neighborhood had messed up the algorithm it used to compress images. Galileo was supposed to take an 800-by-800 pixel image and downsample it to a 400-by-400 pixel image by summing four pixels together into one pixel value. It couldn't just read out those four pixels at a time from the CCD though -- it had to load two lines of pixels into memory, grabbing the two pixels from the first line and then the two pixels from the second line and add them together. Due to the error, though, instead of reading pixels and then skipping forward one whole line of 800 pixels to the next line, it only skipped 400 pixels before grabbing the next pair. As a result, it wound up summing pixels from the left half and right half of the images together, making these double-exposed pictures. Jason's blog entries have lots more detail on this problem and the clever ways they figured out how to reconstruct the images from the garbled data. 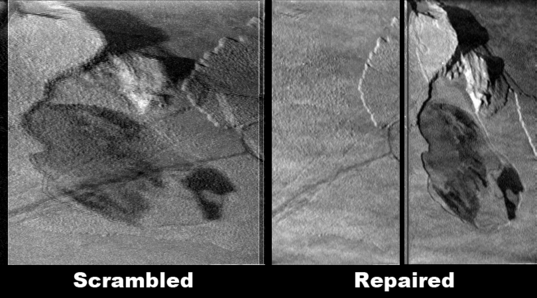