For a very long time Cassini has been in an orbit that carried it high above and below the plane of the rings. This has been fantastic for observations of the rings and planet during the equinox season, and has permitted some cool observations of Titan's poles (since Cassini always comes back to Titan sooner or later for an orbit-adjusting gravity-assist flyby). But it's meant there's been very little in the way of high-resolution views of the other moons.

With the last Titan flyby on October 12, Cassini came back to an orbit that's nearly in the equatorial plane, and immediately rewarded us with some fine views of several of the icy moons. Here are a bunch of images of those moons taken over the 13th and 14th: Rhea, Saturn's second-largest moon. Cassini got quite close so used the wide-angle rather than narrow-angle camera to get a whole-moon view: 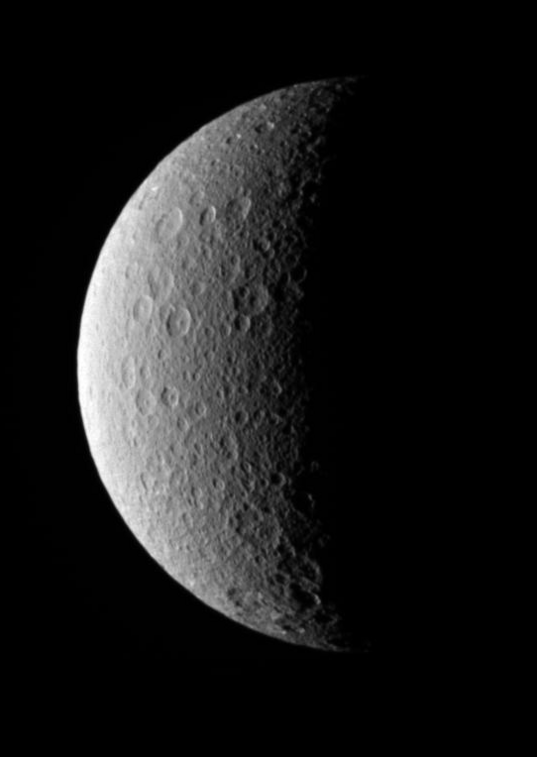 Cassini observed a slightly less than half-full Rhea on October 13, 2009.

Next came Enceladus. This view is particularly nice. It's really unusual to be able to see Enceladus' surface and its geysers clearly in a single shot, because the geysers are most visible when they're lit from behind, leaving Enceladus only a skinny crescent; and they have to use a long enough exposure that any sunlit surface is overexposed. That's the geometry here, but Enceladus' night-side is half-lit by Saturnshine, which lets us take in sunlit crescent, nightside surface, and geysers all in a single exposure. 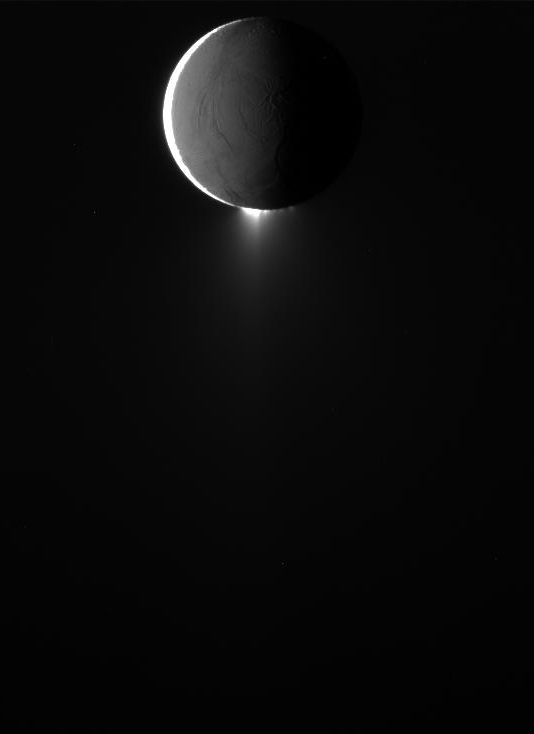 Cassini captured this lovely view of a crescent Enceladus, lit also by Saturnshine, with its south polar geysers backlit by the Sun, on October 14, 2009.

Here's a neat view of Mimas that makes its egg shape obvious. Its funny shape arises from the balance between self-gravity (which would make it spherical) and rotation (which causes it to bulge in the middle) and tides from Saturn (which stretches it out in the directions pointing toward and away from Saturn). All of Saturn's moons are triaxial ellipsoids, but Mimas is small enough that its self-gravity is weak enough that the deviations from the self-gravitational spherical shape are really obvious. 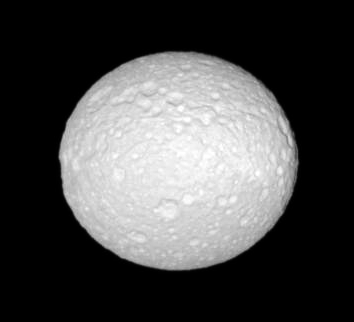 Cassini shot a nearly-full-phase view of Mimas on October 14, 2009. From this perspective, Mimas' flattened ellipsoidal shape is evident.

Finally, as Cassini sped away from its encounters with these inner moons, it got nice long views of a fully lit Tethys. This very nice color composite arrived in my mailbox from Sean Walker, an editor at Sky and Telescope magazine. NOTE: Since I first posted this I have rotated the image 180 degrees so that north is up. 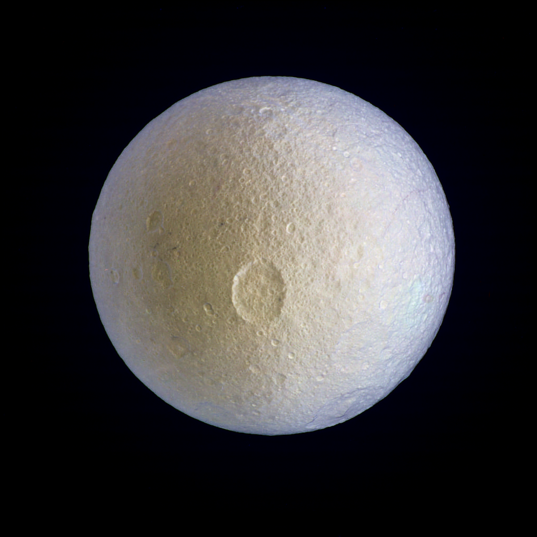 Cassini captured this view of Tethys at nearly full phase on 14 October 2009. A composite of images captured through infrared, green, and ultraviolet filters enhances the color variations visible across Tethys' surface.

It's hard to get a handle on the orbital geometry that sets up the possibilities of these views, and also on why the different moons appear at different phases to Cassini. So for fun I thought I'd put together an animation that shows how Cassini's orbital motion relates to the orbital motions of the inner moons. Below that are four panels that show you approximately the field of view of Cassini's narrow-angle camera, pointed at the four moons that Cassini photographed over this period. Enjoy!

On October 13 and 14, 2009, Cassini had returned to a trajectory that was close to the plane of Saturn's rings, allowing it to have numerous "Voyager-class" encounters with Saturn's inner icy moons. This animation covers one full day of the Cassini mission and shows how its orbit relates to the motions of the moons (top panel) and how its narrow-angle camera view of four of those moons -- Rhea, Mimas, Enceladus, and Tethys -- changed with the changing positions of spacecraft and moons.