The Lunar Reconnaissance Orbiter Diviner team just released some preliminary views of their data taken during the LCROSS impact, which clearly shows the thermal signature from the crash into the Moon. I'm too tired for analysis so will lazily repost what they said on their blog. Also note that DIVINER is very, very similar to the Mars Climate Sounder instrument on Mars Reconnaissance Orbiter; Diviner operates in nadir mode more than Mars Climate Sounder.

The LRO Diviner instrument obtained infrared observations of the LCROSS impact this morning. LRO flew by the LCROSS Centaur impact site 90 seconds after impact at a distance of ~80 km. Diviner was commanded to observe the impact site on eight successive orbits, and obtained a series of thermal maps before and after the impact at approximately two hour intervals at an angle of approximately 48 degrees off nadir. In this viewing geometry, the spatial footprint of each Diviner detector was roughly 300 by 700 meters. 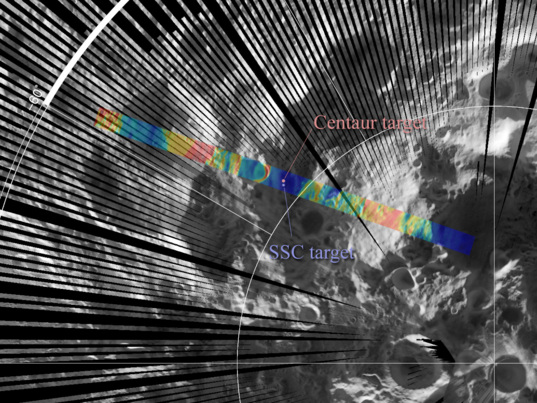 [The figure above] shows the locations of the Diviner LCROSS impact swaths overlain on a grayscale daytime thermal map of the Moon's south polar region. Diviner data were used to help select the final LCROSS impact site inside Cabeus Crater, which sampled an extremely cold region in permanent shadow that can serve as an effective cold trap for water ice and other frozen volatiles.

[The figure above] shows preliminary, uncalibrated Diviner thermal maps of the impact site acquired two hours before the impact, and 90 seconds after the impact. The thermal signature of the impact was clearly detected in all four Diviner thermal mapping channels. Since the LCROSS impact feature is predicted to be significantly smaller than a Diviner footprint, its detection is consistent with the notion that the LCROSS impact resulted in significant local heating of the lunar surface.