"Third anniversary?" some of you may be asking. "Hasn't it been more like five years since Spirit landed?" Five Earth years, yes. But today, sol 2,008, is a date that's more relevant from the point of view of the rover: it's the third anniversary of the landing, measured in Mars years. It's now the same midsummer season in the southern hemisphere that it was when Spirit landed, all those Earth years ago. 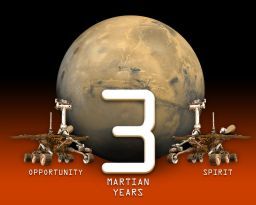 Yesterday I visited the Jet Propulsion Laboratory to get a look at the "sandbox" where they're testing the methods they'll use to extract Spirit, and also to get some updates on a couple of other missions. I posted a bunch of photos and updates via Twitter and Facebook yesterday -- here's more detail. Even if you're not a member of Facebook and don't want to be you can see the full photo album here.

My main goal was just to lay eyes on the work they're doing in the In Situ Instrument Laboratory, the building where they test-drive a full-scale mockup of the Mars Exploration Rover. This mockup is called the Surface System Testbed, otherwise known as the SSTB, and it's mostly a copy of the rovers that are sitting on Mars. There are some differences: its "wings" don't actually support solar arrays (which would be useless indoors!) and it receives its power and commands via a physical set of cables, an umbilical of sorts. But it has the same mobility system, same cameras, etc., so for test-driving purposes it is a pretty close replica of the rovers that are sitting on Mars.

As A. J. S. Rayl has explained in her last three rover updates (from July, June, and May -- and her August one should be posted in a few days), the engineers on Earth have developed a soil simulant that works pretty well at mimicking the behavior of the soil under Spirit's wheels on Mars, and they've been running numerous tests with the SSTB to see what combinations of wheel turns and motions seem most promising for extricating the rover.

After an experiment driving the rover in a crablike motion, MER team members prepare a test setup for a subsequent experiment with all four corner wheels angled to the right. Clockwise from top: Scott Maxwell, Pauline Hwang, Kim Lichtenberg. This work on July 9, 2009, was part of a series of tests at JPL designed to determine the best way to get Spirit out of a Martian patch of soft soil called Ulysses in an area known as Troy, where the rover's wheels have dug in. The test setup, in a box that team members are calling the "dust bin," simulates the situation at Troy. The box holds about 2.7 tons of a powdery mixture of diatomaceous earth and fire clay. This powdery material has physical properties similar to the soil at Troy. The top surface is sloped at 10 degrees.

The first question that almost everybody asks when they learn about the testing of Spirit is "how do they account for the difference in Martian gravity?" After all, the force of gravity on Mars is only about a third that on Earth, so our version of the rover on Earth weighs three times as much as the version of the rover on Mars. There is no way to put the rover on Earth into microgravity! The answer is that the soil they are using in the testbed is not intended to be the same composition as the soil on Mars. Instead, it is a mixture of materials that, when the SSTB drives through it, behaves exactly (or as close to exact as they can make it) the same as the soil has been observed to behave under Spirit's wheels on Mars. They drove into this material with the SSTB, complete with the right front wheel frozen, using the same set of commands that got Spirit mired on Mars, and the SSTB got mired in the same way.

It seems that they've pretty much gone through all the possible modes of driving the SSTB in the simulated sand trap -- they've tried driving straight, driving backward, turning in place, doing crablike motions with all the corner wheels turned in the same direction, driving slower, and various combinations of the above -- so they think they understand pretty well the behavior of the SSTB in their simulated Mars soil, and they have some ideas for what might work to extricate Spirit. However, in an abundance of caution, they're now running through some tests to explore the "phase space" around their experiments. They have brought in what's called the SSTB Lite, a stripped-down engineering model of the rover that is pretty much only wheels and body, which weighs on Earth just about what Spirit weighs on Mars. Here's a photo, actually a six-image panoramic shot taken from the observation deck. 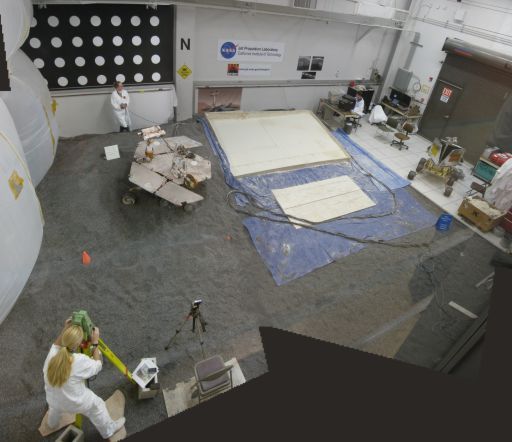 On August 25, 2009 on the Mars Exploration Rover side of the In-Situ Instrument Laboratory at JPL, rover engineers were test-driving the engineering model of the rover (known as the Surface System Testbed or SSTB) on a sloping surface composed of coarse sand. Next to it sits the sandbox containing a mixture of materials designed to simulate the behavior of the soil at Troy on Mars, where Spirit was stuck. In the foreground, rover driver Sharon Laubach uses a theodolite to measure the SSTB's position after a test of driving in a crablike motion. In the background on the right, the SSTB Lite -- a stripped down, Mars-weight engineering model of the rover -- waits to perform similar tests.

As rover project manager John Callas explained to me in a brief chat I had with him, this week they are doing "four corners testing." What he meant by that is that they are running tests that explore the performance of the engineering models among two variables: the weight of the rover (Earth weight versus Mars weight) and the type of soil beneath its wheels (fluffy soil simulant and the garnet-rich coarse sand that fills the rest of the testbed). Now that they've characterized the performance of the SSTB on the fluffy soil simulant, they want to find out just how sensitive the performance is to the weight of the rover and the type of soil under its wheels; they'll run the SSTB Lite in the fluffy soil simulant, and then both the SSTB and SSTB Lite on a sloping surface of garnet sand.

While I was there yesterday, they were running the SSTB on a hill built of the coarse sand. I saw them run through one test, in which they appeared to have the corner wheels turned crabwise 30 degrees to the left, which is downslope. As I watched, the wheels spun slowly and the rover mostly appeared to rotate, pivoting on that stuck right front wheel, the back end swinging around through an arc of about 30 degrees or so. That did leave the left front wheel I think slightly more uphill than it was before, but most of the motion of the rover's center of gravity appeared to be downslope.

I also asked John about the current situation with the regional dust storm over Spirit. He told me that tau, or atmospheric opacity, had gotten above 2.5 -- which is pretty high -- and that the dust factor, or the performance of Spirit's solar panels, had deteriorated somewhat to 0.7-something. But he also said that the weather reports from the MARCI team on Mars Reconnaissance Orbiter call for the storm to abate, which should make things better for Spirit. The question always with dust events is: will the dust be blown away, or as the storm abates, will it drop out of the sky onto the solar panels? Time will tell.

I also had a chance to chat with rover driver Scott Maxwell, and I asked him what the mood was like among the team. He said that just as the overall rover operations had long ago switched from a "sprint" mode of treating every day as possibly the rover's last to a "marathon" mode of greater patience and not trying to cram every possible activity into every day, the Free Spirit project had had a similar sort of shift. Their first couple of months of testing proved pretty conclusively that extricating Spirit could not be done with one basic motion as had worked for getting Opportunity out of Purgatory; it's going to be more complicated than that with Spirit. So now they are being very, very methodical, doing every possible test on Earth, before they begin to slowly, methodically, carefully drive the rover on Mars to try to get free of Troy.

While I was in the In Situ Instrument Laboratory I got a chance to peek at some hardware that they are working on for the Curiosity rover, also known as Mars Science Laboratory. The Mars Exploration Rover mission used to have all of the building to itself but this year they had to give up half their room to the next rover mission. The Curiosity team (boy, am I having a hard time getting used to calling it that) were hard at work on the engineering model of the rover, the equivalent to the SSTB that I'd been watching on the Mars Exploration Rover side of the building. The Curiosity engineering model isn't fully assembled yet, but I saw most of the major components at different spots in the room: body, rocker-bogie suspension system, robotic arm, and six enormous black wheels. The only major things I didn't spot were the camera mast and the mass model they'll have to attach to the rover's butt to stand in for the radioisotope thermal generator. 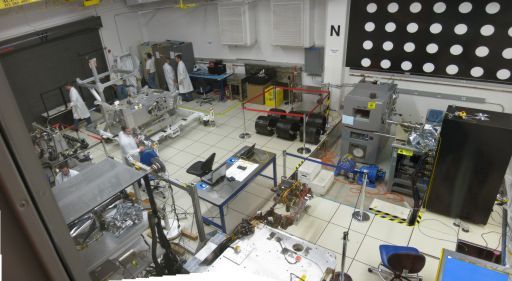 On the Mars Science Laboratory's half of the In Situ Instrument Laboratory on August 25, engineers worked on assembly of an engineering model of the Curiosity rover. Near the center of the image in the background are the rover's six enormous wheels. At center foreground is the robotic arm. At left in the background are the rover body (large silver box) and the rocker-bogie suspension system (black, extreme left). If the scale of the wheels is not clear, the white floor tiles are two feet (60 centimeters) square.