Scott Maxwell is one of those many guys (and gals) at the Jet Propulsion Laboratory who rarely gets his name in the news but who is absolutely indispensable to the success of a space mission. I don't know what his official title is, but whatever it is, it's not as good as the colloquial name given to his position: Rover Driver. Yes, Scott drives the Mars Exploration Rovers for a living. I'd say he looks pretty pleased with his place in life, wouldn't you? I'll quote space poet Stuart Atkinson's description of him: he is "a very lively, exuberant, always smiling, great galloping puppy of a Mars geek." 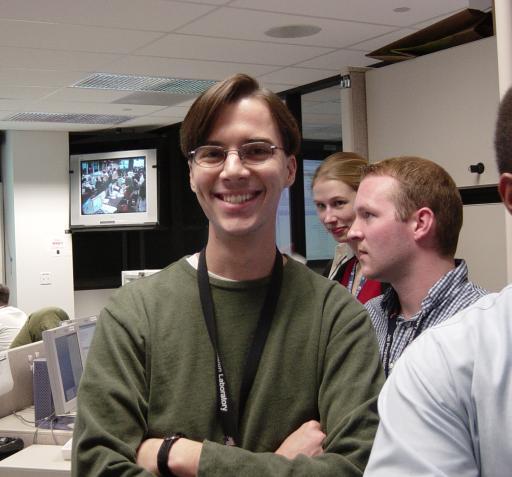 On the occasion of the fifth anniversary of Spirit's landing, Scott has begun a new blog, "Mars and Me." It seems that, in order to keep in touch with his wife while he was working on Mars time (and while she was sticking with Earth time), he kept a detailed journal of the daily events on the missions. Now, five years later, he's posting his notes, at approximately the same rate at which the sols passed on Mars. There's one entry for every 24 hours and 40 minutes or so. We're on sol 3 already, and I am totally hooked; tosol's notes spend a lot of time recalling the discussions the mission was involved in over what to name the geographic landmarks at Spirit's landing site, while yestersol, he was lamenting the fact that he spent the sol writing code instead of working directly on Spirit's first motions on Mars. It's a view of the mission that's the same, yet different, to the one I had for the first two months of operations. I was with the scientists, while he is an engineer. Unusually for space missions, the cooperation between the science and engineering sides of the rover missions was very tight; it had to be, because every slow turn of the rovers' wheels and reach of the rovers' arms had to be programmed and executed by rover drivers like Scott, in sequence with the science operations that the science team was trying to perform. I'll be waiting impatiently for each day's entry, and hope that Scott can keep it up!

In today's entry he also talked about how the science team was trying to figure out where exactly Spirit had landed. I have a couple of snapshots from sol 2, of everyone crowding around giant printouts on the table...what a crush of scientists that was! 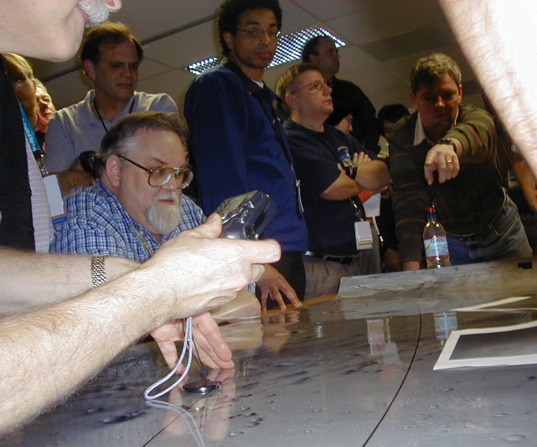