Solar conjunction: Holidays for Mars missions, and an Opportunity update

The period of Mars solar conjunction has just begun, which means that a host of scientists and engineers whose day jobs entail interaction with the five active Mars spacecraft are getting a five-week break from the daily grind of operations. Conjunction happens roughly every two Earth years when Mars is very close to the Sun in the sky (within five degrees of the Sun), and this time it goes from November 18 to December 24. (If you want to give your or your kids' brain a little work, try to figure out why conjunctions are approximately two Earth years apart -- longer than either one Earth year or one Mars year. Hint: both are moving around the Sun, but one moves faster than the other.)

Orbital mechanics have a nasty habit of making exciting things happen right on human holidays, but for once conjunction has happened at a great time, giving scientists a holiday right when they actually want to take a holiday. Next week is a major holiday in the U.S., Thanksgiving, and conjunction takes us right through just about to Christmas. Everyone's gonna have to get back to work right after Christmas though!

Spacecraft can't do much science during conjunction for two reasons, both of which have to do with problems with radio communications. Radio communications between Mars and Earth near conjunction are complicated by the amount of radio noise generated by the Sun. If a spacecraft tried to relay science data back through that noise, there's a good chance the data would be corrupted, affected by the noise. And spacecraft data recorders are built to a capacity that assumes that the spacecraft can communicate with Earth daily -- there's just not room to hold five weeks' worth of data on board.

There's a bigger issue than that, though. Let's say you wrote a sequence for a spacecraft that covered the whole five-week conjunction period, maybe for some sort of monitoring experiment that generated less data than normal, and then, some time during conjunction, a bug in the sequence caused an anomaly on the spacecraft? The radio noise would prevent you from being able to (a) learn about the anomaly and (b) fix it. So, spacecraft are usually put to bed before conjunction, placed into a mode in which it is really really unlikely that they will suffer an anomaly. That doesn't mean they can't do any science at all (although sometimes they don't), it just means that whatever they do has to be a super-safe activity.

So, take Opportunity, for example, which has been wending its way southward among Meridiani's dunes. Its recent drives have carried it to an area with fewer dunes and more exposed rock (for a better view, download Mike Howard's Quicktime VR version of the full panorama):

This is a small portion of the view from Opportunity's Navcam as it paused on its drive to Endeavour to wait through Mars solar conjunction. Opportunity sits on an area of bedrock that is relatively clear of the dark Meridiani sand. The full panorama may be viewed and rotated in this Quicktime VR view, produced by Michael Howard (3.5 MB).

The communication blackout of conjunction means that there will definitely be no more driving until Christmas at least. But Opportunity won't be entirely on holiday. The last couple of drives were short ones, designed to position the rover in front of a target, any target, that it could investigate with the tools on its robotic arm during the long conjunction period. They finally found one rock, which they've named Santorini. It's a bit on the small side, but it'll do, especially when you have five years of experience in pinpoint placement of the arm on a target. 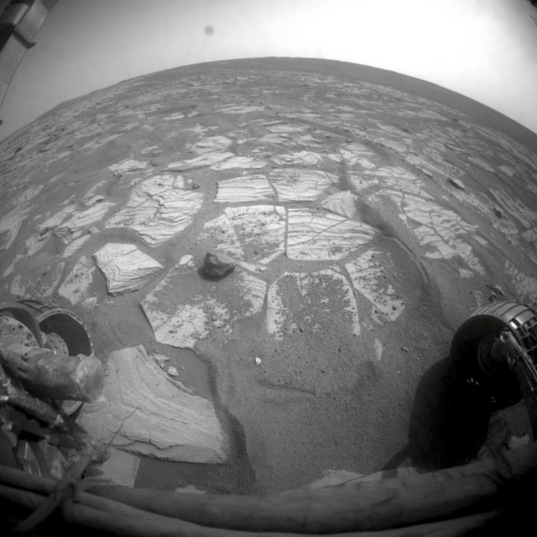 Before Mars entered solar conjunction, cutting Earth-Mars communication off for a couple of weeks, Opportunity nudged up to a tiny rock named Santorini on sol 1713. Later that sol Opportunity positioned the instruments on the end of its arm atop Santorini, prepared to take a long measurement of its composition during the communications hiatus.

Opportunity can't budge an inch for the next five weeks, but, as long as the arm is already in place, using its Mössbauer spectrometer is on the list of "safe" things for it to do while out of touch with Earth. The Mössbauer requires very long integration times (long observation times) numbered in days, and it can even be operated when the rover is otherwise "asleep."

Someone asked me a question relating to conjunction communications, which I'll be answering on Monday's Planetary Radio. I got my information from Mark Adler, who's worked on many deep space missions from the rovers to Cassini, and I asked him for some more fun facts about conjunction communications. Here's what he said: "You can communicate with the line of sight closer to the Sun with Ka-band than you can with X-band." These are just terms for different "colors" of radio -- Ka-band is shorter wavelength/higher frequency than X-band, or, in a sense, Ka is "bluer" than X-band. Nearly all deep-space missions use the X band for communications. Mars Reconnaissance Orbiter has a Ka-band transmitter in addition to its X-band one as a technological experiment. Cassini can broadcast in Ka, X, and S bands.

Mark went on: "With a laser, you could presumably get closer still. For X-band, we pretty much assume that trying to communicate reliably is futile at a sun-Earth-probe angle of less than about five degrees. For Ka band, that might be two or three degrees. As an example of the difference that makes, the sun-Earth-Mars angle will be within five degrees from Nov 18 to Dec 24, whereas it will be within two degrees from Nov 29 to Dec 13. That's a five week outage versus a two-week outage.

"The telecom guys always want to experiment around conjunction to see how low of a sun-Earth-probe angle they can communicate at, and exactly how the communications degrade. Sometimes the mission managers oblige them, even though we don't like experiments on perfectly good spacecraft, in order to know what would be possible and not possible if we really needed to communicate in an emergency. And you can do a little science too, looking for how much the Sun's gravity bends the radio waves, or the effect of solar plasma on the radio waves."

So, although I don't know this for sure, I'm guessing that Mars Reconnaissance Orbiter is going to be doing some experiments during conjunction using that Ka-band transmitter it has (or at least the telecom guys want to do that experiment). The conjunction period marks a transition for Mars Reconnaissance Orbiter anyway; its primary mission ended at the start of conjunction, on November 18. A mission extension was always planned, called the "Relay Phase" -- meaning that the orbiter's primary function over the next Mars year was to serve as a communications relay for any landed assets. But with Phoenix gone, MSL not yet launched, and the rovers still able to use a long-lived Odyssey for most of their communications, Mars Reconnaissance Orbiter is fairly free of relay duties. According to a recent post on the HiRISE team blog, they've officially renamed the Relay Phase to the Extended Science Phase -- so expect a lot more good stuff from that mission over the coming years.