Opportunity is really hitting the highway

Opportunity's drivers are not messing around! Victoria crater, the site of a Mars year's worth of study, is now far over the horizon, as Opportunity has lately completed a series of very long drives. Opportunity is once again sailing the sand seas of Meridiani Planum. Here's the view as of sol 1,691. 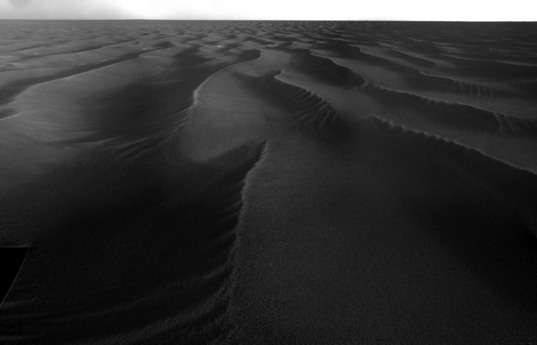 Back to Meridiani's sand seas

I last checked in with Opportunity on sol 1,666, as it was doing a few last sightseeing stops around the crater. Opportunity stopped in at Cape Victory for one view and then Cape Agulhas for its last postcard from Victoria. Cape Agulhas is the southernmost tip of South Africa, a fitting departure point for Opportunity. The view back into Victoria from there contained tantalizing, steeply exposed rock faces in Cape Victory.

On sol 1,676, Opportunity sat near its last stop around the rim of Victoria, Cape Agulhas, and gazed back to Cape Victory, a steep face of exposed bedrock.

It's tough for a geologist to tear herself away from such enticing-looking rock, to embark on a (possibly) years-long journey to an uncertain goal -- but to do just that is now Opportunity's mission; there is more potential scientific payoff in the journey than there would be in further months exploring Victoria. So off Opportunity went, departing Victoria on sol 1,683. A full Navcam panorama from that day contains Opportunity's last-ever view of Victoria crater.

Sol 1,683 was the first short step in Opportunity's long drive from Victoria to Endeavour. At the end of the sol's drive, Opportunity took a complete Navcam panorama, the last that would include Victoria. Opportunity's departure point from Victoria was named Cape Agulhas for the southernmost point on South Africa.

Fittingly, on October 20 (sol 1,685) -- just before Opportunity left Victoria behind forever -- the United States Geological Survey announced that Opportunity's eventual goal had formally been named Endeavour crater. So Opportunity leaves a home behind, but has a name for its next destination.

Drives on sols 1,686 and 1,687 took Opportunity well over 100 meters each time; the odometry on sol 1,691 was over the 200-meter mark. But Opportunity's made little progress toward Endeavour yet, because it's not driving south-southeast toward Endeavour, but instead southwest, which seems a little odd. But if you look at Eduardo Tesheiner's route map below, you'll see there's a method to their madness. Opportunity is aiming for an area in which the north-south-trending sand dunes are just a thin cover atop exposed bedrock, a much safer (not to mention faster) driving surface than trackless dunes. That area will become a nice highway on which Opportunity should be able to make good progress southward. 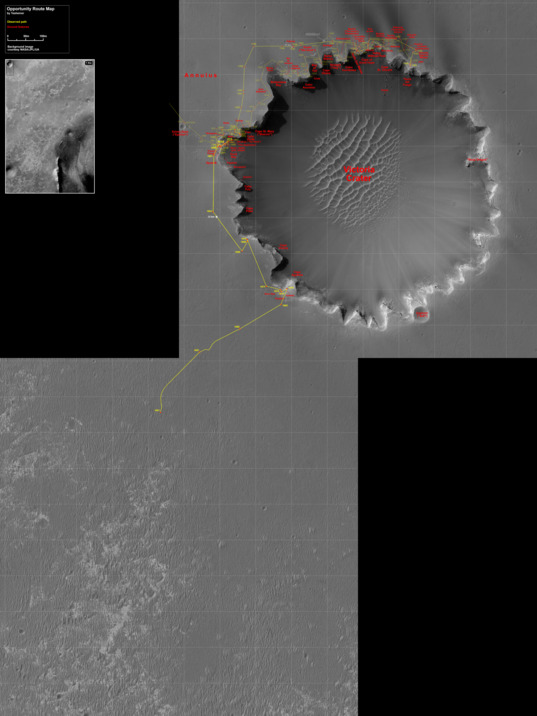 Sol 1,691 saw Opportunity more than 400 meters to the southwest of Victoria crater, which it departed on sol 1,683. Opportunity was headed for an area where the north-south dunes of Meridiani Planum were spread thinly over exposed bedrock, a landscape that would provide Opportunity with a "highway" southward on its journey toward Endeavour crater. The inset to the upper left shows the land between Victoria and Endeavour. Grid lines are spaced 100 meters apart.

It's on the road again for Opportunity!