A bit of fun with Mars Express images of Phobos

First of all, before I start, I want to apologize for the recent issues with our website; I know it's occasionally been down periodically over the last week or so. Our hosts are upgrading some hardware, and each time a new piece is put in place everything goes down for a while. But it should all be over soon. I appear not to have made satisfying sacrifices to the gods of the Internet lately, because the email and website aren't my only problems. For reasons I have little comprehension of, I can't seem to get to unmannedspaceflight.com from my home computer anymore; there's apparently some node between me and that site that isn't letting me through. I think. Of course, the fact that I can't refresh and reread that site a bazillion times a day means I'm actually finding the focus to work on a bigger project: namely, downloading and examining every Mars Express High Resolution Stereo Camera image of Mars' two moons, Phobos and Deimos.

I was motivated to do this because of the recent ballyhoo about the Mars Reconnaissance Orbiter HiRISE image of Phobos. It's a beautiful image, and well worth the attention it received, but it's just one image; Mars Express had, I knew, taken lots of them. But this is the only Mars Express image of Phobos that ever seems to pop up on the Internet. 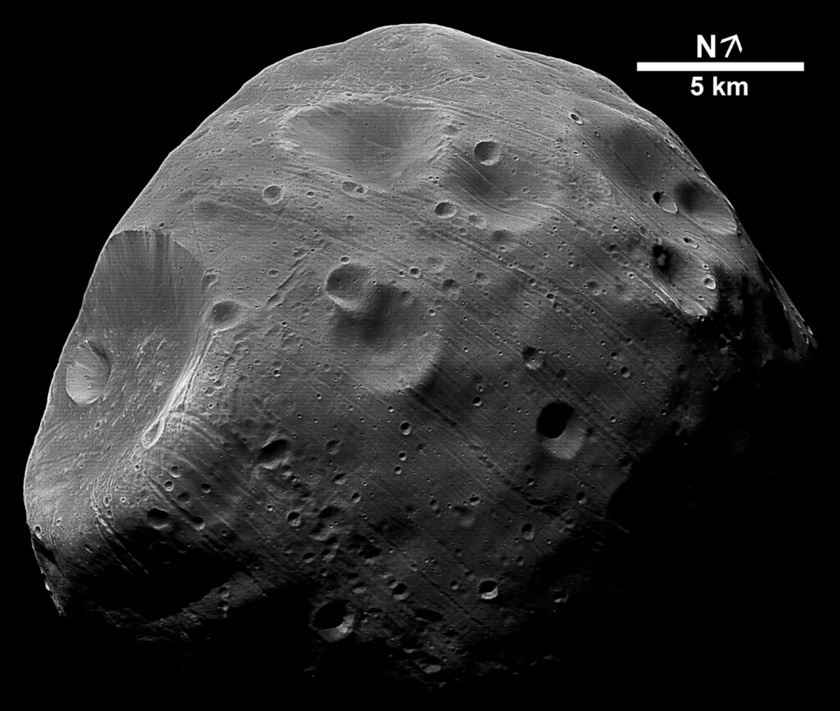 Phobos is likely a captured asteroid and is a tiny object measuring only 27 x 22 x 19 kilometers (17 x 13 x 12 miles) in size. The pixel scale of the enlarged view of this moon is only 7 meters (20 feet), nearly the highest ever achieved; and with the sharp vision of Mars Express' High Resolution Stereo Camera, the details are sharper in this image than in any previous one. The huge crater to the left side is named Stickney.

There's a montage of a few other images on the ESA Mars Express website; but even they use Viking orbiter images of Phobos to illustrate their own page on the moon! It's sad, because there's just so much more out there.

Just to show you how much more there is, here's a crib sheet I put together while trying to figure out what part of Phobos each photo shows. There is a photo from nearly every orbit on which Mars Express pointed at Phobos. 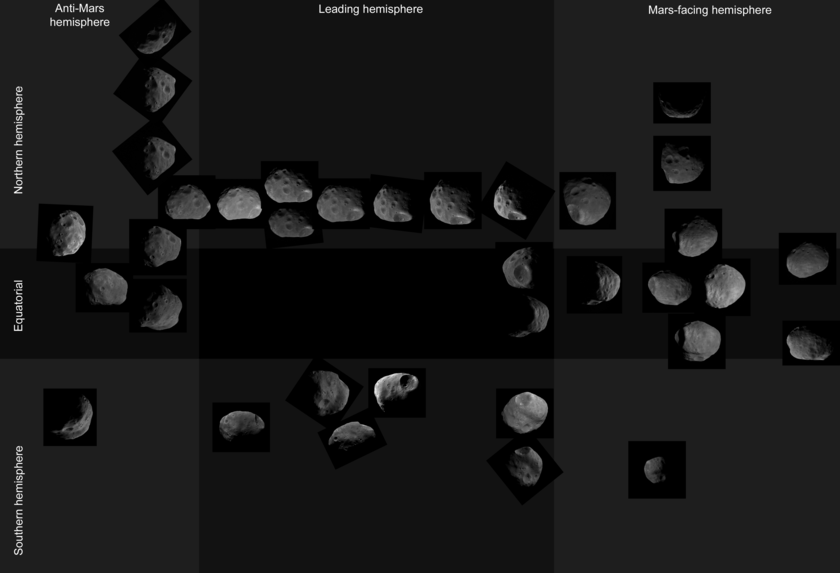 Phobos, like nearly all the other moons in the solar system, is locked into synchronous rotation, which means that it rotates exactly once for each orbit. The corollary to synchronous rotation is that the same face of Phobos always points toward Mars. Because Phobos orbits at an altitude of about 6,000 kilometers above Mars, most of the recent orbiters only get to see this Mars-facing hemisphere: Mars Global Surveyor, Mars Odyssey, and Mars Reconnaissance Orbiter all circle Mars at much lower altitudes of just 250 to 400 kilometers. Only Mars Express, with its highly elliptical orbit reaching up to nearly 12,000 kilometers above the surface, can see all these different faces of the moon. (The Vikings also got views of all sides of Phobos; they, too, had highly elliptical orbits, with orbital altitudes reaching up to about 33,000 kilometers.) Since Phobos has a Mars-facing hemisphere, what you might call the Phobos "nearside," there's also a Phobos "farside," otherwise known as the anti-Mars hemisphere; and Mars Express is the only current orbiter that can see any of that. Here's a view of the farside: 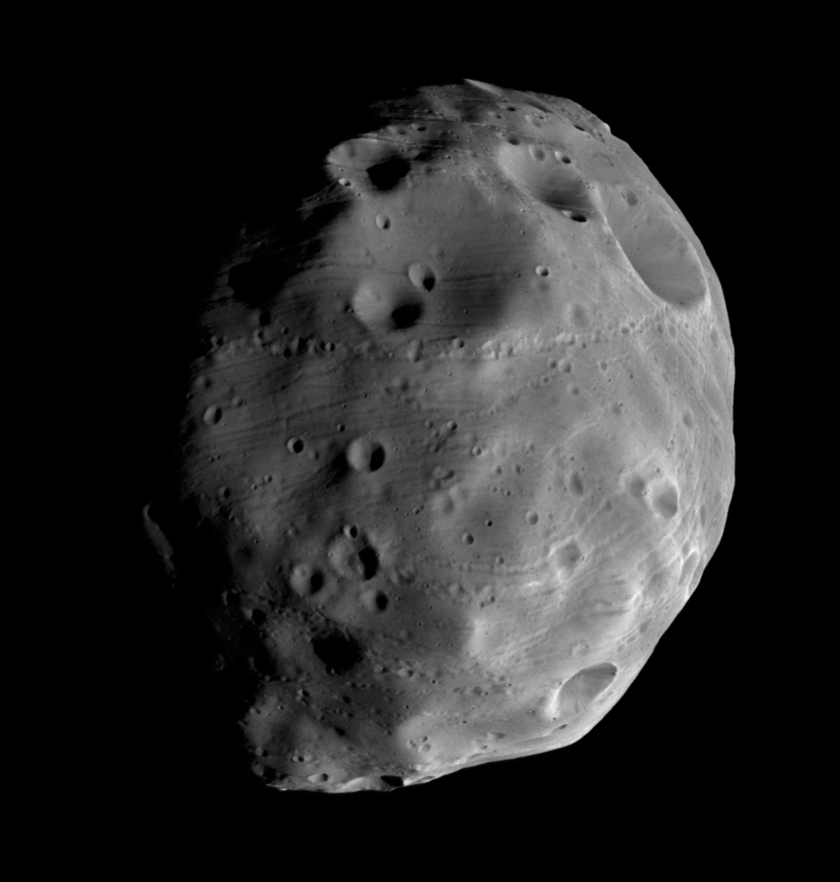 Mars Express captured this image of the "farside" of Phobos on January 3, 2007, on orbit number 3,843. The view shows terrain not visible to lower-altitude Mars orbiters. The view peeks slightly over the north pole (which is located just above the top of the prominent crater on the terminator near the top of this image).

Mars Express gets nice views of the polar regions, too. The image at the top of this page shows much of the northern hemisphere; here's a south polar view. The pole is contained within the large squarish crater, which is named Hall, to the lower center of the moon in this photo; Stickney makes the divot in the equatorial region to the right. 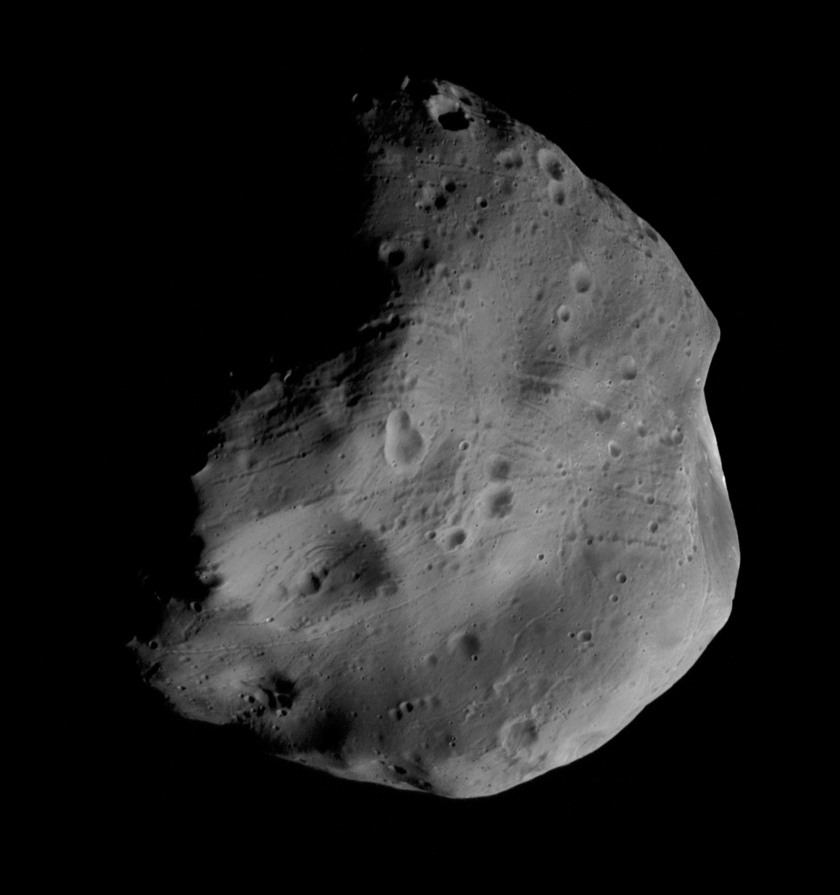 Mars Express captured this view of the southern hemisphere of Phobos on May 13, 2007.

As my crib sheet shows, Mars Express has done a fairly good job of shooting photos over the Mars-facing and anti-Mars sides, and the leading side, and both polar regions; the one area it hasn't really centered a good photo on is the trailing side. This is the best view I could find. It's centered about midway between the Mars-facing and trailing hemispheres; Stickney is rotated just out of view on the left side. 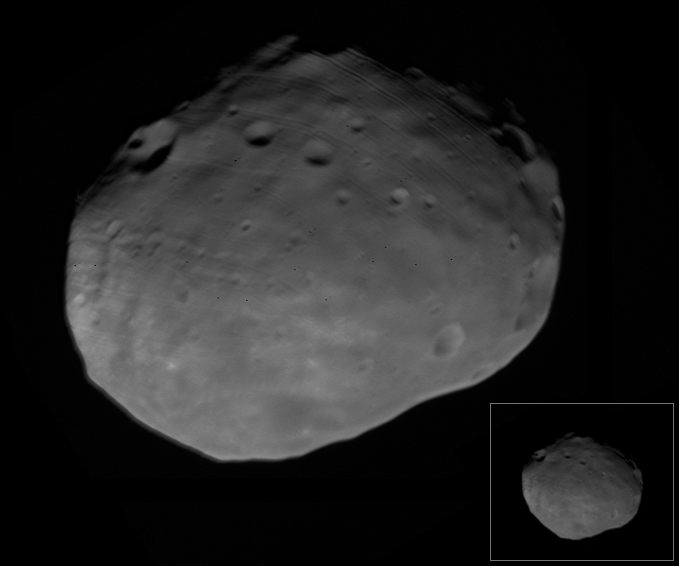 If you think this image looks oddly blurry, you're not crazy. HRSC has two components: a pushbroom-style camera (similar in style to MOC on Mars Global Surveyor and HiRISE on Mars Reconnaissance Orbiter) that produces long, narrow image swaths with many colors and many millions of pixels each, and a framing camera called the Super-Resolution camera (SRC) that grabs little snapshots, single one-megapixel, black-and-white frames, at much higher angular resolution, here and there along the much bigger image swaths. But SRC was found after launch to suffer from astigmatism (as well as a host of other problems that reduce its effectiveness). You can see the "double vision" effect on the lower left limb. The problem is annoying but hasn't really affected the science productivity of the Mars Express mission; there were always going to be thousands of times more data bits from the much more capable HRSC instrument. Anyway, that's the best I can show you of the trailing hemisphere. The sad part is that the trailing hemisphere is (if I remember correctly) where the Russian Phobos Grunt lander is supposed to land. The Mars Express mission does plan to improve on the coverage of the trailing hemisphere, but they have to shift the orientation of their orbit to do that, and they can't start shifting the orientation of their orbit until after they've accomplished their responsibility to monitor the real-time telemetry from the Phoenix landing.

Here's two more image bits, just for fun. The first is a selection of the Mars Express images, greatly reduced in resolution and animated into a little movie.

This animation contains 10 views of Phobos captured by Mars Express on different orbits. It begins with a nearly north polar view on the anti-Mars hemisphere, and moves southward a bit before rotating into the leading hemisphere.

And, finally, to close, a crescent Phobos. 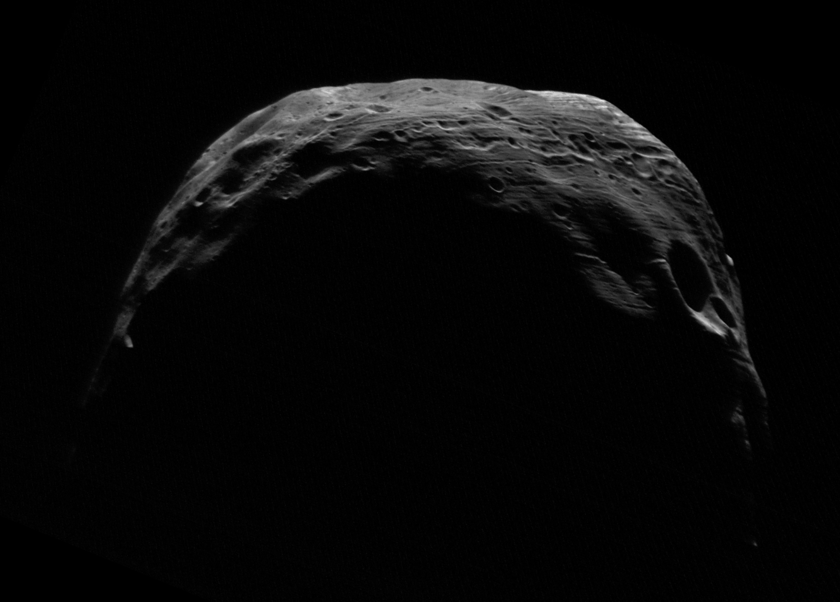 Mars Express captured this view of a crescent Phobos on May 25, 2007. The view is looking down on the northern hemisphere, with the equator toward the top. A bright splash of material on the upper right limb is the west rim of the giant crater Stickney.