This is from the "just plain cool" department. Among the many tasks assigned to the Mars Reconnaissance Orbiter imaging team is to create "digital elevation models," otherwise known as DEMs, for current and future landing sites on Mars. DEMs are, essentially, topographic maps; they're really valuable for rover missions especially, because they can tell you how steep slopes are, what directions they face, and where shadows will be cast at different times of day. Doug Ellison has been playing with a DEM that Randy Kirk and the other folks at the United States Geologic Survey have been working on for Victoria Crater, the spot that the Opportunity rover has been exploring since late 2006. He created an animation that flies a light source over the crater in the same path taken by the Sun in the sky at Mars.

You can see dawn come to the crater and the shadows slowly retreating into the eastern capes of the crater, then fill the crater again as the Sun sets in the west. In addition to watching the shadows move, you can see why the rover team chose Duck Bay (at the left side of the crater) as Opportunity's entry point -- it's a broader, flatter bay than any of the others. Even better, the nearby cliff of Cape Verde strikes almost east-west, which means that it casts very little shadow even near dawn and dusk, allowing the solar-powered rover to approach quite close to it before there is any impact on the amount of sunlight that strikes the panels. Here's the latest route map that I have, which gives some context. 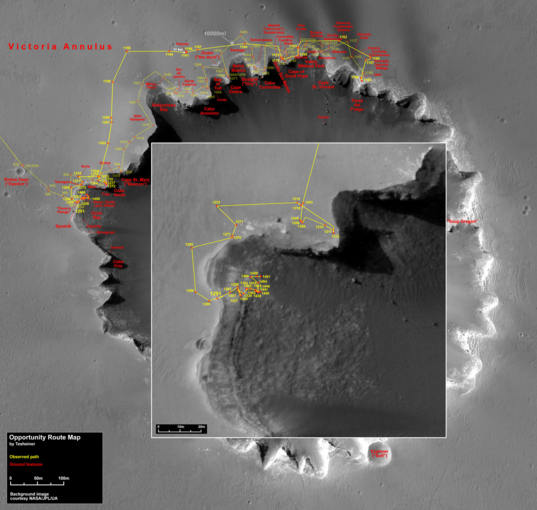 As of sol 1,491 (April 3, 2008), Opportunity was inside Victoria Crater, carefully approaching Cape Verde to its northeast.

There are a couple of artifacts visible in the animations, particularly two sets of what look like railroad tracks crossing the area; these occur because of seams between individual HiRISE camera images that were used to create the DEMs.

While I'm speaking about the rovers, I should mention that this week's Planetary Radio features an interview with rover principal investigator Steve Squyres. Enjoy!