There have been so many missions to Mars, which have sent back so much data, that figuring out how to find images of places on Mars can be really overwhelming. Today while in search of some Mars photos I stumbled across a website that has probably existed for years but which I never realized was there until now. Arizona State University maintains a forms-based and graphical interface data browser not only for data from its main Mars camera, THEMIS on Mars Odyssey, but also for data from four other cameras: the Viking orbiters, MOC on Mars Global Surveyor, and the Context Imager and HiRISE camera on Mars Reconnaissance Orbiter. 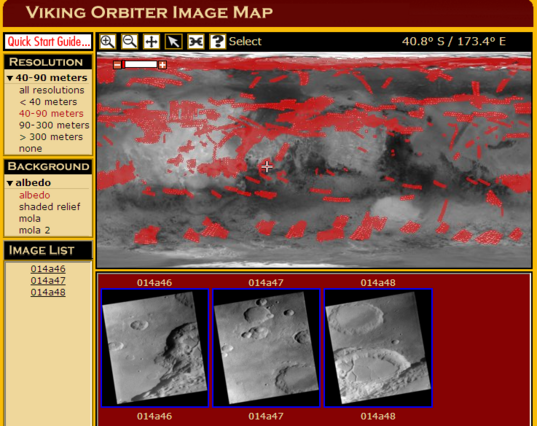 Arizona State University provides graphical and forms-based tools for locating data from the Viking orbiters, Mars Global Surveyor MOC, Mars Odyssey THEMIS, and Mars Reconnaissance Orbiter CTX and HiRISE cameras. This screen cap shows the map interface to high-resolution Viking orbiter imagery. The "Image list" at lower left and thumbnails at bottom show all Viking orbiter images with resolutions between 40 and 90 meters per pixel that overlap the point at the crosshair.

This is an incredibly handy resource; as long as you know approximately where on a Mars map (or if you know the latitude and longitude) a feature of interest is, it is very easy to zoom within a data set to find all available images, and not just press-released images, but all publicly archived data from these missions. When you click on a thumbnail, you get a full page on that image, with various download options, and lots of useful information like the date and time it was taken, through what filters, at what resolution, and so forth. And the data sets are all nicely map-projected and cleaned up. This is a terrific resource, and it provides one-stop shopping for nearly all the interesting Mars image data out there. Hopefully they'll be able to add CRISM images at some point; for now, there is a form-based search utility on the CRISM website. Mars Express has its own wonderful and easy-to-use data browser for the HRSC data set, which has added functionality: it can drape Mars images over digital terrain models derived from those images to produce 3D views. Apart from that, it'd be fun to see ASU add the Mariner 9 data, for historical interest. And none of these sites provides browsers for images of Phobos or Deimos from the same data sets, which would be a useful addition. But this is all quibbling; the fact that you can browse through complete Mars data sets from eight cameras on five missions through only three websites is very handy!