The story of a Sasquatch-shaped rock visible in a recent panorama from Spirit is getting a lot of play in the mainstream media, but fortunately, it's not being taken very seriously. (My favorite take on this picture is the lead from the Times Online story about it: "Is it a rock? A trick of Martian light on the eye? Or Osama Bin Laden waving from his barren hideout 300 million miles from planet Earth?") I'm sure that a lot of you who are regular readers are regarded as authorities on space by your friends and family, and some of you may be receiving questions about "bigfoot on Mars." You may find it annoying that after months of virtually ignoring the rover missions, there is finally a much-discussed news story, and it's on something as silly as a humanoid-shaped rocky outcropping -- but please suppress your annoyance and try to use this as a teaching moment.

Here's the photo in question, which is an unusually good example of an optical illusion in an image from Mars; I think pretty much any person would see a humanoid shape in this photo. This is an example of pareidolia, the human propensity to see patterns in random shapes. (For more on the topic of pareidolia, I'll direct you to the Bad Astronomer.)

This is a tiny detail from a panorama taken by the Mars Exploration Rover Spirit on sol 1,366-1,369 (6-9 November 2007) of its position on the eastern edge of Home Plate.

The humanoid figure shows up in a panorama that Spirit took from its position on top of Home Plate on sols 1,366-1,369 (which was in early November). It's a crying shame to show that tiny little closeup without also showing the whole panorama from which it came. I cropped the closeup from the Pancam team's version of the panorama, which you can download in full resolution from the JPL Photojournal, but I'd prefer to post James Canvin's beautiful version of the view from Home Plate. It's hard to spot Bigfoot in this image, because I can only post it in half-resolution on this website; you really need to download the full-resolution image to find him. But don't let your desire to find Bigfoot blind you to the Martian scenery. From its position on Home Plate, Spirit is gazing westward, past the Columbia Hills on the right toward its original landing site, near the horizon, on the flat interior plains of Gusev crater. It's a pretty view, and one that Spirit's going to be enjoying for a long time, hunkered down as it is on the edge of Home Plate for what may be a very difficult winter.

The images for this panorama were taken by the Mars Exploration Rover Spirit on sol 1,366-1,369 (6-9 November, 2007) from its position on the eastern edge of Home Plate. The view spans about 180° around the rover, from southwest to northeast. A rock-dotted hill in the middle distance across the left third of the image is "Tsiolkovski Ridge," about 30 meters or 100 feet from the edge of Home Plate and about that same distance across. A bump on the horizon above the left edge of Tsiolkovski Ridge is "Grissom Hill," about 8 kilometers or 5 miles away. At right, the highest point of the horizon is "Husband Hill," to the north and about 800 meters or half a mile away.

The color photo of Bigfoot, in all its graininess, seems like a snapshot that Spirit took with the color camera on its mobile phone, catching a space alien visitor in motion as it dashed across the crater floor. It's easy to forget that color images from space are almost never taken all at once, in one snapshot. Nearly all cameras sent to space have monochrome detectors. To obtain color images, they have to take a photo of the same spot at least three times, each time with a different-color filter placed in front of the lens.

In this case, Spirit took aim at that particular spot first with blue filters over both its left and right eyes. A minute later, having saved the first files to memory, it rotated the left-eye filter wheel to place an infrared filter over its left eye, and shot the scene again, and saved that image to memory. Then, about half a minute later, it was ready to shoot the scene a third time, with a green filter over its eye. Do you see what I'm getting at here? That weird little twisty piece of dark rock that looks like a humanoid figure stood perfectly still while the three images were taken, between 11:58:53 and 12:00:13 local time at Spirit's landing site.

OK, the conspiracy theorist might say; it's cold on Mars, maybe our Martian Bigfoot is very slow-moving in that cold. Well, it turns out that this isn't the only time that Spirit spotted the funny rock. Before Spirit spends the time taking the numerous images required for a Pancam panorama (this particular panorama took 154 images, four each from 36 different pointings), the rover usually takes a quick-and-dirty version of the same panorama through its lower-resolution Navigation Cameras. The Navcam version of the panorama was captured fully three days earlier than the Pancam version and you can see that Bigfoot is in exactly the same position on sol 1,364 as it was on sol 1,367. Here's all the pictures I dug up, with help from the folks at unmannedspaceflight.com and especially Mike Howard's Midnight Mars Browser: 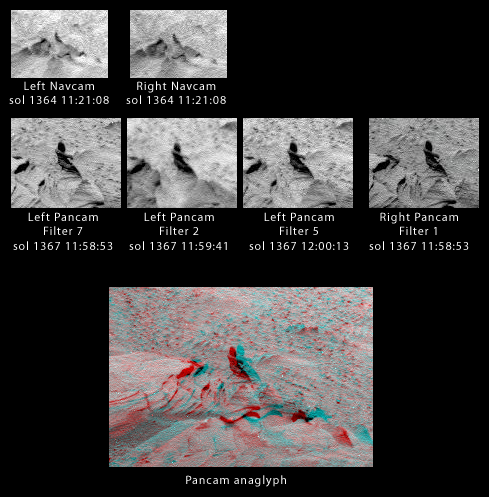 Spirit's many views of 'Bigfoot'

The zoomed-in view of the image on the Internet also makes it very difficult to see that Bigfoot is really not very big. There's a neat tool that another rover fan, "Algorimancer," has written that allows you to use the rovers' binocular vision to estimate the distance to and size of objects visible in their images. Using AlgorimancerPG, you can determine that our little "Bigfoot" is actually less than five meters from the rover, so can be no more than about 6 centimeters tall. I put an anaglyph together, so if you have 3D glasses you, too, can take advantage of Spirit's binocular vision. For myself, I can't actually quite figure out what the blob actually is; there's a lot of weirdly weathered rock around Spirit's landing site, where sand-filled winds have had billions of years to carve rocks into fantastic shapes.

OK, we've had our fun. Now, pull back from your staring at a tiny, grainy little corner of the image. Click to enlarge again on the original panorama, and think to yourself: this is Mars. I'm staring through the eyes of a rover that was only supposed to survive three months, maybe six, possibly a little longer; yet it's been four Earth years since Spirit landed, and it's still ticking. That's probably the number one lesson you can teach your friends from this silly little story: the image came down from Mars only two months ago. Both rovers are still up there, and they're still working, still studying the surface of Mars for us after all this time. That picture was sent from the surface of an inhospitable world, more than a hundred million kilometers away. The rovers still talk to us every day, faithfully sending us more pictures even as they get colder and colder. Some people think that it's as bad to personify the rovers as it is to claim to find space aliens in their pictures. For myself, though, I just can't help it; I identify emotionally with those rovers as with all other spacecraft, and my heart gives a leap when I think about the fact that the rovers may not survive another long, cold Martian winter. While they're still there, we should do them the honor of thinking of them every day, checking on the results of their daily toil, because one day all too soon they'll both fall silent, never to be heard from again.

I think your article stinks, because you have not done any current research and the fact is that we are looking at either a small humanoid or statue on Mars. NASA has been long hiding the facts. It is no optical illusion, there are thousands of anamolies on Mars and that includes statues, flextubes, pictograms. etc

@jhn, just because you think something does not make it true. Also, I suggest you read an article before you post a comment on it, because you seem to have missed the fact that I have, in fact, done research. It is true that there are a lot of anomalies on Mars, things that we do not have adequate explanations for. That is why we are sending spacecraft to take pictures and other data. We learn things when we study the data, as I demonstrated in my article.

Nice article. I did not realize that cameras had to operate that way to take pictures on mars.