The MESSENGER spacecraft is zeroing in on Venus for the most significant gravity assist maneuver of its long journey to Mercury. The flyby was previewed yesterday at a press conference held at NASA Headquarters in Washington, DC. Today at 23:08:19 Universal Time (16:08:19 PDT), MESSENGER will skim Venus' atmosphere, shedding velocity to drop it toward the Sun and the innermost planet. 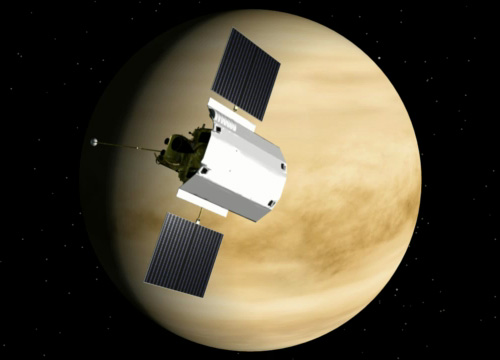 Unlike the mission's first Venus flyby, conditions this time are favorable for MESSENGER to take advantage of the close approach to aim all seven of its science instruments at our sister planet, while the European Space Agency's Venus Express spacecraft is in position to perform simultaneous measurements. Fortuitously, the flyby also happens at the same time that Venus is at its maximum elongation from the Sun as seen from Earth. Twenty teams of professional astronomers will take advantage of the favorable geometry to observe Venus with some of Earth's great telescopes.

In order to enter orbit at Mercury, MESSENGER is traveling on a long, looping tour of the inner solar system. It launched on August 3, 2004 and is currently on its fourth (of 16) orbits of the Sun. It has already completed two gravity assist flybys, one each of Earth and Venus; this second Venus flyby will drop it toward Mercury, which it will fly by three times before finally achieving orbit on March 18, 2011.

At the press conference, MESSENGER mission systems engineer Eric Finnegan explained the details of the maneuver. Finnegan said that this, the second Venus flyby, will produce the largest change in velocity for MESSENGER throughout its long cruise: measured with respect to the Sun, its speed will drop from 36.5 to 27.8 kilometers per second (22.7 to 17.3 miles per second). Its orbit will change from a fairly circular one to a much more elliptical one that will bring MESSENGER closer to the Sun and Mercury. The flyby will bring MESSENGER to within a death-defying 356 kilometers (209 miles) of Venus' surface. 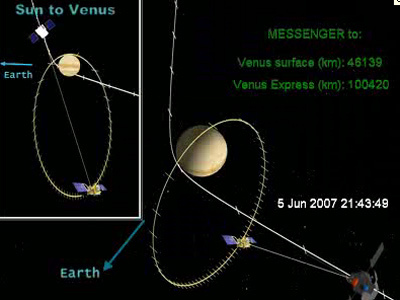 On June 5, 2007 at 23:08:19 UTC, MESSENGER will fly within 336 kilometers (209 miles) of the surface of Venus at a relative speed of approximately 50,000 kilometers per hour (30,000 miles per hour). The gravity assist maneuver will decrease MESSENGER's speed with respect to the Sun, dropping it toward a rendezvous with Mercury.

The previous Venus flyby happened when Venus was close to superior conjunction, making communications with the spacecraft very difficult, so mission planners opted not to add risk to the maneuver by activating the instruments. This time, conditions could not be much better for observations; Venus is near its maximum elongation from the Sun, and the spacecraft will be reassuringly visible to Earth throughout the entire maneuver. The science team is taking advantage, Finnegan said. "This is the first time in flight that the entire instrument package will be operational simultaneously. We will be gathering six Gigabits of data and will take over 630 images as well as other science data over a period of 73 hours."

MESSENGER principal investigator Sean Solomon explained the science plans in more detail. "MESSENGER will approach Venus from the day side -- the sunward side -- and will pass over the dusk terminator. Closest approach will be on the night side, just a little bit south of the equator, in full view of Earth. We'll be taking data for a number of hours before and after closest approach, something like 30 hours of observations in all." 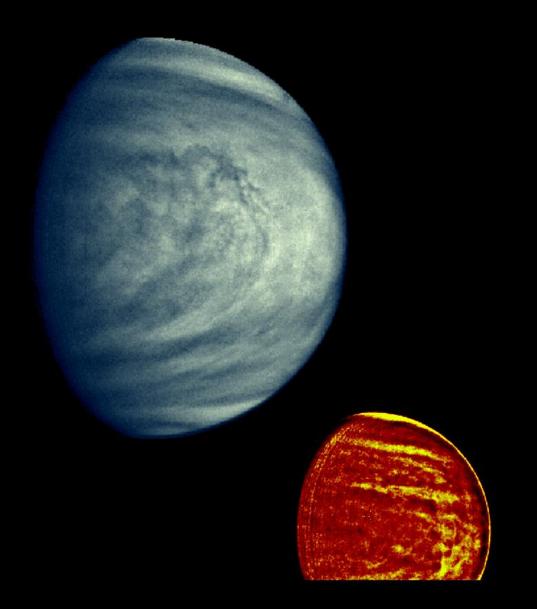 A Galileo view of Venus taken through a violet filter on February 14, 1990, reveals U-shaped patterns in Venus' upper atmospheric clouds. The entire atmosphere of Venus rotates in an east-to-west fashion.

As MESSENGER retreated from its August 2, 2005 flyby of Earth, it captured a full day's worth of images of Earth's receding crescent, which were assembled into a movie.

Mission scientists have designed the science plans for the encounter to serve as a dress rehearsal of the operations they would like to perform during the first flyby of Mercury, just six months away on January 15, 2008. In a phone call with The Planetary Society, Mercury Dual Imaging System team member Louise Prockter explained some of the detailed plans for imaging at Venus. "The camera is not designed for Venus. Our filters are designed for the composition of Mercury, but we have two near-infrared filters that we think may get through the clouds to see the surface." However, she cautioned that "only time will tell" whether MESSENGER's cameras will achieve surface imaging. "We also have a filter at 415 nanometers that is about the same as the filter on Galileo that was able to see cloud patterns. So we hope to be able to look at cloud movement, and then shortly after closest approach we start to lay down footprints on the surface using those infrared filters that hopefully will go right through the clouds."

Regardless of whether the camera succeeds in seeing the surface of Venus, just acquiring the images near closest approach will be an important step for the imaging team, Prockter said. "The imaging is an extra bonus, if we get it. The primary reason we're turning on at all at Venus is for calibration sequences that are quite important, and to try out things we're going to do at Mercury. We're trying mosaics that we've never done before, and a lot of intricate movement between the spacecraft and the pivot that the camera sits on. In some of these images all we're going to get is a bright blob of Venus, because the filters aren't the best ones for Venus observations, but they will still give us a chance to give the camera a good workout and make sure we know what we're doing in time for the first Mercury flyby." Prockter also said that they would acquire an outbound movie of the motions of Venus' clouds similar to the one they captured of Earth, with images being taken to about 30 hours after closest approach.

In addition to the camera, MESSENGER carries six other science instruments. Solomon detailed the observation plans for the entire instrument suite:

As MESSENGER flies by Venus, ESA's Venus Express spacecraft will also be capturing science data on the planet, a prospect that excited Solomon. "This is the first time that we are able to take observations from two different vantage points, two different platforms, with complementary sets of instruments, on the atmosphere, the clouds, the composition, and especially the interaction of the whole Venus system with the solar wind, magnetic field, and particle flux."

One of the most interesting observations, Solomon said, involves the laser altimeter, which is designed to measure the topography of Mercury's solid surface. The laser altimeter cannot penetrate Venus' clouds to see that planet's surface, but "MLA will be ranging to Venus, attempting to get laser returns from the cloud deck, which has never been done before, to see if we can learn something at high resolution about the cloud structure of Venus." Venus Express project scientist Håkan Svedhem looks forward to the measurement. "The laser altimeter will provide an absolute distance to the tops of the clouds. We measure that in a more relative sense; this will give us a calibration."

Data from the encounter will begin being returned from both spacecraft on Thursday, June 7. MESSENGER will nominally complete transmission of its data to Earth by the end of the weekend. Unfortunately, Venus Express happens to be in a phase of its mission in which the geometry of the Sun, spacecraft, and Earth require it to use the smaller of its two dish antennas for communications (because using the larger one would expose parts of the spacecraft to unacceptable levels of solar heating). As a result, the data that they take as MESSENGER passes by will not be completely transmitted until at least June 15.

The next 18 months will be very busy ones for the MESSENGER team, Finnegan said. There will be two Mercury flybys, three deep-space maneuvers requiring MESSENGER's powerful main thrusters, and as many as 13 smaller maneuvers to fine-tune the trajectory.

The science team is now busy planning their observation sequences for the first Mercury flyby. Prockter said that the first flyby will allow the camera to photograph large regions of Mercury that have remained terra incognita since the Mariner 10 mission imaged 45 percent of the planet in 1974 and 1975. In particular, she is looking forward to the first spacecraft images of the west half of the Caloris Basin, a huge multi-ringed impact structure that was half in darkness to Mariner 10. 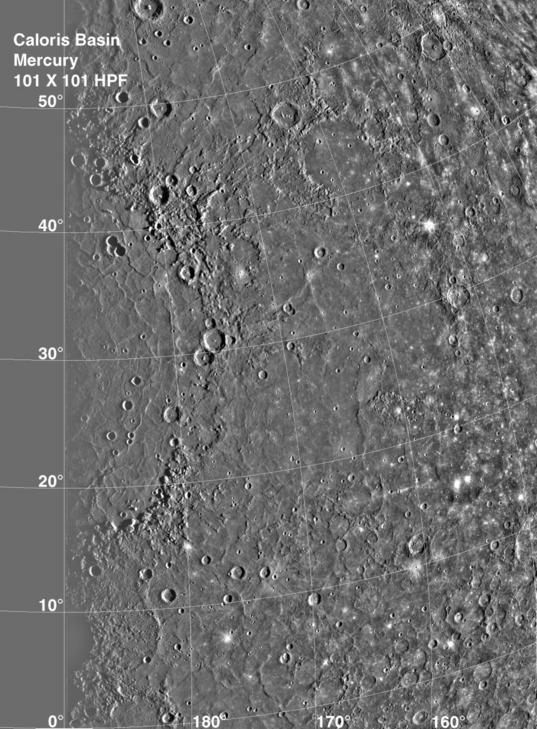 The Caloris Basin is one of the largest basins in the solar system at approximately 1,300 kilometers (800 miles) in diameter. Only half of it was seen by Mariner 10 as it sped past Mercury in 1974. This view was "high-pass filtered" to remove the brightness and darkness effects of the solar illumination angle, to better emphasize topographic features. Scale: 1000 meters per pixel. Created: 29 March 1974.