A press release just hit my mailbox stating that MESSENGER has been heard from since its Venus flyby, so there are now only four flybys to go before MESSENGER will be in orbit at Mercury! The press release stated that MESSENGER flew within 2,990 kilometers of Venus at 08:34 UTC (01:34 PDT) today, October 24. Eighteen minutes later, the spacecraft disappeared behind Venus, which is always a scary moment for mission controllers. There's no reason to expect any problem to happen just because you're out of contact with your spacecraft, but still you're biting your nails until contact is reestablished. That happened at 14:15 UTC (07:15 PDT), the release says. However, because Venus is in solar conjunction, it's pretty difficult to get much information radioed back from the spacecraft, and they won't reestablish regular radio communications until "late November."

The release was accompanied by a couple of images and movies. Here's one of Venus that was captured three weeks ago. It doesn't tell us anything about Venus except that MESSENGER was there, which is cool enough for me! 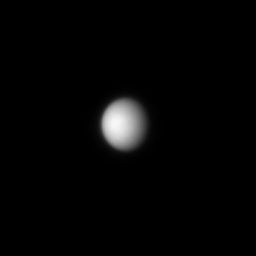 Venus as seen from MESSENGER

This image of Venus was captured by the MESSENGER Dual Imaging System on October 4, 2006, three weeks before MESSENGER's first Venus flyby, from a distance of 10.3 million miles. It has been enlarged to 400% its original size. It was not possible for MESSENGER to acquire science data from closer distances because Venus was in solar conjunction at the time.

Don't take this little blob as an indicator of what MESSENGER's cameras can do. For that, you may want to go back for a reminder of the awesome Earth rotation movie MESSENGER grabbed as it receded from its Earth flyby on August 2, 2005.

They've also added a couple of movies to their website. An interesting one shows the relative positions of MESSENGER and Venus Express during the flyby. There's also a line showing the direction of a line-of-sight link between the two spacecraft, but the MESSENGER website says that no communication was possible. The tick marks on the two paths are 30 minutes apart. You can see how much faster the flyby craft is moving relative to the orbiting craft. (It's also interesting to see how the orbiter's speed varies throughout its highly elliptical orbit.) You can download the movie at the MESSENGER site.

Orbits of MESSENGER and Venus Express

On October 24, 2006, MESSENGER completed the first of two Venus flybys. At the time, Venus Express was also in orbit at Venus. This diagram is one frame of an animation available at the MESSENGER website showing the relative positions of the two spacecraft during the flyby.