In the 48 hours since Huygens' data first began streaming back to Earth, a few processed images of the channeled landscape and bouldery landing site have been released to the public. Now, the Descent Imager Spectral Radiometer team at the University of Arizona has put all of Huygens' images online for the public to view. Here are a few samples: 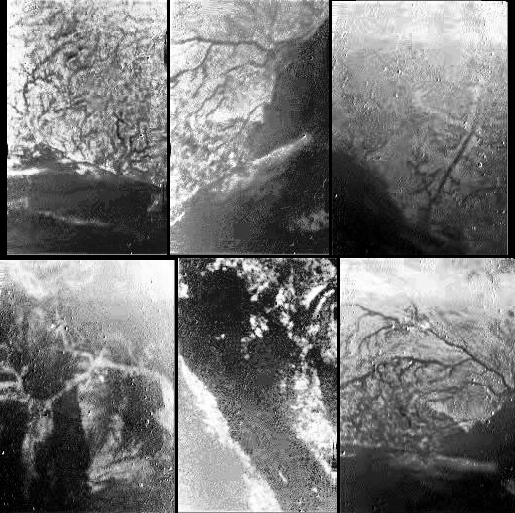 The Descent Imager Spectral Radiometer, or DISR, has three cameras pointed at three different angles (out toward the horizon, almost straight down, and an angle in the middle). As Huygens rotated while descending, DISR captured "triplets" of images as the cameras faced different directions. Each individual image is just a postage stamp, not even a tenth of a Megapixel in size. DISR's true ability to show Titan's surface will only come through once the science team has a chance to assemble the postage stamps together into mosaics. Because Huygens' rotation and swaying seems to have been a little more erratic than was hoped, this task is going to be difficult, but you can be sure that the team will be working very hard to produce mosaics in the days to come. Until then, you can check out the raw images for yourself at the DISR team website, and check out some amateur attempts at mosaicking the images here.

Cassini didn't stop once she dropped off Huygens; she has just flown by her closest approach to Saturn on this orbit, and incidentally past three of the icy satellites, Mimas, Enceladus, and Rhea. (See the end of our Huygens timeline for the icy satellite encounter plans.) Cassini mission planner Amanda Hendrix confirmed that the Cassini Solid State Recorders were freed up following the Huygens encounter in order that the orbiter could capture the best-yet images of these three moons. The images have not yet been returned to Earth.