New Images from the Huygens Probe: Shorelines and Channels, But an Apparently Dry Surface

This image brought applause from everyone at the European Space Operations Centre, Darmstadt, Germany:

This 360-degree panorama from the Huygens spacecraft, hand-assembled from a number of Descent Imager Spectral Radiometer (DISR) images, was taken at a distance of 8 kilometers (5 miles) above the surface of Titan at a resolution of about 20 meters (about 65 feet) per pixel. The left-hand side, behind Huygens, shows a boundary between light and dark areas. The white streaks seen near this boundary could be ground 'fog,' as they were not immediately visible from higher altitudes.

As the probe descended, it drifted over a plateau (center of image) and was heading towards its landing site in a dark area (right). From the drift of the probe, the wind speed has been estimated at around 6-7 kilometers (about 4 miles) per hour.

This is, in Principal Investigator Marty Tomasko's words, an "absolutely raw" 360-degree panorama, hand-assembled from a number of Descent Imager Spectral Radiometer images. Huygens was about 8 kilometers (5 miles) above the surface of Titan when she captured these images. The left side of the panorama shows the area that Huygens was drifting away from. Nearer the right side, where the whitish stuff appears to come to a point, is the area toward which Huygens was drifting with the wind at a speed of about 6 to 7 kilometers per hour (roughly 4 miles per hour). The next image was taken a little bit before this panorama. 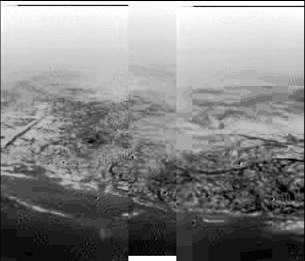 These images were taken from an altitude of about 8 kilometers (about 5 miles) and a resolution of about 20 meters (about 65 feet) per pixel on January 14, 2005, by the European Space Agency's Huygens probe during its successful descent to land on Titan. It shows the boundary between the lighter-colored uplifted terrain, marked with what appear to be drainage channels, and darker lower areas.

There is some higher elevation light colored stuff covered with "dendritic" or root-like features. "It's impossible to resist the speculation that we are seeing drainage channels or some part of a shoreline," Tomasko said. "We don't know if there is still some liquid in [the channels or lake] or if it's drained away into the surface. Maybe this was 'wet' not so long ago and the liquid hasn't penetrated too far into the surface." When Tomasko says "wet," though, he doesn't mean "water." He is referring to liquid ethane or methane. There is water ice on the surface of Titan, but at Titan's frigid temperatures that ice is as far from melting as rocks are on Earth.

In fact, Tomasko says, in the panorama image (at the top of this page) if you look at the same "shoreline" area visible in the second image, you can see that as you look at the shoreline from a lower angle it appears whiter or brighter. Tomasko attributed this brightness change to the presence of methane or ethane fog near the surface at the shoreline.

Tomasko also showed some new interpretations of the image they published yesterday from the surface of Titan. 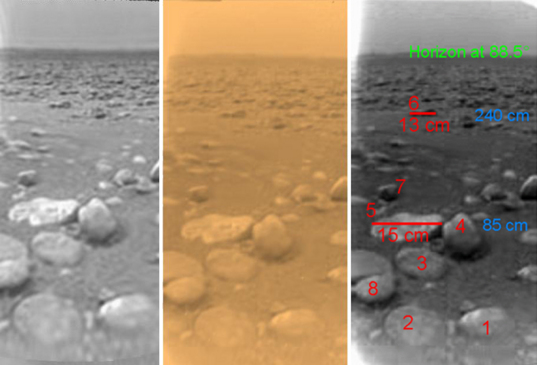 The image on the far left is the one that was released yesterday. The middle one shows "the general impression of the color from the surface of Titan," according to Tomasko. "There is a slightly orange sky and orange general tone to the material. This is the view you would have if you were standing on Titan," he finished enthusiastically. The color was applied using data from the "spectral radiometer" component of the DISR instrument, which gathers information at a much lower resolution than the imager, so what you see is a wash of color over the black-and-white image.

The image on the right begins to give us a sense of the scale of the features on the surface of Titan. The rocks visible in the foreground are about 10 to 15 centimeters (4 to 6 inches) across (red numbers). The blue numbers indicate distance away from the spacecraft: foreground rocks are at 85 centimeters (33 inches) away, and what appears to be a rockless channel of some kind is 240 centimeters (nearly 8 feet) away. The camera is sitting only 40 centimeters (17 inches) above the surface, so its view is from knee height, which makes the rocks look a lot bigger than they are.