NASA's Deep Impact spacecraft is set for its date with Comet Tempel 1. "All systems checked out perfectly, and we are ready to go Saturday night," said Dave Spencer, Deep Impact Mission Manager at the Jet Propulsion Laboratory (JPL), in a press conference there this morning. "We are going to hit a bullet with another bullet while watching from a third bullet," said Charles Elachi, the head of JPL. "To make it more challenging, we are trying to hit it from the shiny side. And to make it even more difficult, it has never been done before. But the payoff would be worth the risk. For the first time in thousands of years, instead of fearing comets, we will be able to know what they are made of."

At 23:07 Pasadena time on July 2 (06:07 July 3, UTC), the spacecraft will split into two pieces. One half will collide with Tempel 1 on July 3 at 22:52 (05:52 July 4, UTC) as the other half watches. Fourteen minutes after the impact, the flyby spacecraft will pass within 500 kilometers (310 miles) of the comet, well within the comet's "coma," the atmosphere of dust and ice particles surrounding the nucleus. For this dangerous passage, the spacecraft must rotate in order to place five layers of copper shielding between its electronics and the incoming dust particles.

Questions at today's press conference focused on the potential hazard to the spacecraft of new dust being spewed out by "outbursts" of cometary activity that have occurred on June 14, June 22, and June 30. "When we first saw these outbursts we wanted to know whether this represented a problem from a mission viewpoint," said Rick Grammier, Deep Impact Project Manager. "But the overall impact is pretty minimal. There seems to be an outburst about once every 4 or 5 rotational periods." If this regular timing persists, another outburst is not expected before the impact takes place.

Of course, if an outburst happens in the wrong place at the wrong time, particles from the outburst could endanger the spacecraft, Grammier conceded. "We can only guesstimate at danger to the flyby craft. It depends on how violent the outburst is. As we fly by at only 500 kilometers," he said, you couldn't predict the outcome. But regardless of the comet's outburst activity, the plan for the mission is fixed, and the spacecraft expendable. The most important outcome of this mission is the impact event itself.

This movie is made up of many frames captured by Deep Impact's Medium Resolution Imager between June 22 and June 24, 2004. A brightening by a factor of about 5 and a rapid decay to baseline brightness were observed on June 22. The same outburst was also observed by the Hubble Space Telescope and several ground observatories.

In fact, if a spacecraft anomaly were to occur that prevented the planned separation of the flyby spacecraft from the impactor, Deep Impact Mission Manager Dave Spencer said, "We will take the entire spacecraft and impact the comet that way. That will supply us with fantastic images as we go in to the comet, and we have an armada of other spacecraft and telescopes taking data, so we'll get a lot of data from that."

The outburst activity that has been witnessed so far is very interesting to comet scientists because it is rare that such small events are seen, explained Deep Impact Principal Investigator Mike A'Hearn. "This is one of the very few occasions where we've had continuous viewing of a comet, and we can begin to understand what drives these outbursts. They are very short; not much stuff comes out; and they dissipate very quickly, like sneezes. The coma expands very rapidly over half a day, and then it dissipates." A'Hearn added that this is not an unusual amount of outburst activity for Tempel 1.

Deep Impact scientists were thrilled to report that they have already begun to make detailed measurements of the comet's composition. Spectroscopist Jessica Sunshine, a Co-Investigator on the mission, described the first spectra received from the spacecraft. "It was exciting to see anything 10 days before the encounter. We can already identify water, complex hydrocarbons, carbon monoxide, and carbon dioxide. We can compare the spectrum to what we saw in the VEGA mission to Halley's Comet, and we are seeing almost the same kinds of materials. But what's refreshing about this is that [when we captured these spectra] we were 300 times farther away from Tempel 1 than VEGA was from Halley. And we are getting signals 50 times brighter now than even what you see here. From the data, we are able to tell that the outburst doubled the amount of water in the coma."

Sunshine explained that as Deep Impact approaches the comet, it will gain a unique perspective on the comet, unattainable from any more distant observatory. "From telescopes, we mostly see the outer coma or atmosphere. But the materials that come out of the comet are short-lived. They react with each other and with solar radiation to make secondary materials, and that's what we see from far away. But with Deep Impact we will be able to see the primary materials as they come out. We are trying to see materials that are on the inside. Like any good geologist, we take our hammer and we hit it, to see how hard it is and see what's inside. These materials have not seen the light of day for 4.6 billion years. That is what we're waiting to see. These materials are going to pass in front of the spectrometer and we are going to see the compositional variation on the inside of the comet." 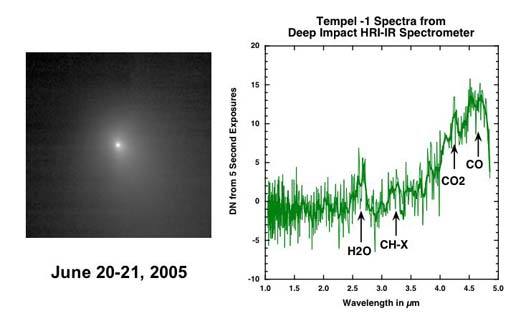 The "squiggly line" in the graph at right represents the first spectral information on the composition of Deep Impact's coma, captured a full 10 days before the encounter. Arrows point to spectral "features" -- peaks and valleys -- that can be used to identify the presence of specific chemical species, such as water (H20), hydrocarbons (CH-X), carbon dioxide (CO2) and carbon monoxide (CO). At its best, the spectrometer will be able to capture spectra like these for 7-by-7-meter (25-by-25-foot) pixels on the surface of Tempel 1.

A lot is riding on the ability of the navigational team -- which includes autonomous navigation programs aboard the flyby spacecraft and impactor. But one possible outcome of the encounter is that Deep Impact will miss. With the extreme speeds involved in the encounter, and the 8-minute one-way light time between the spacecraft and the Earth, it will be impossible for Earth-based controllers to steer the impactor in its final moments.

Is it possible that the impactor's navigational program won't work? Grammier said: "The outcome depends upon [the quality of] our computer models of the comet. We have varied the parameters within our models, and used that to test our systems to see how our systems are sensitive to those parameters. We think we have covered a broad spectrum of possibilities. In the end, though, we still don't know what this comet has in store for us. What science will we get if we have a miss of the nucleus? In that case we will still get very good resolution of the comet nucleus itself, better than we have had before."