An opportunity for Spirit to see Earth and Venus together?

I received the following question by email last week:

"Do you know if the Mars rovers team has any plans to photograph Venus and Earth together in the evening sky from either rover site? They will be closest together around Sept. 29th."

I checked the Solar System Simulator, and here's what the sky would look like to Spirit on September 29. 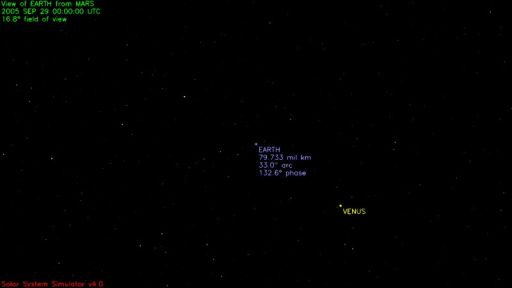 Earth and Venus as Seen from Spirit on September 29, 2005


The view is set to Spirit's Pancam 16.8-degree field of view. Earth and Venus would be two crescents of light in the sky. Pancam wouldn't be able to see their color, because they generally use their panchromatic filter and not color filters to do astrophotography -- it allows them to keep exposure times short.

The question seemed like a good one so I forwarded it on to Texas A & M researcher Mark Lemmon, whom I know is interested in things in Spirit's sky. Here's what he had to say.

"Sadly, we don't have such plans. This was a neat picture we identified a while back when we surveyed astronomical options. Unfortunately, the planets are too close to the Sun right now. We know from experience and modeling that we can see Earth when the Sun is at least 15 degrees below the horizon and the Earth is at least that far above. It gets better when there is less dust in the sky, and worse when there is more. Now, we cannot get a color image of the Earth or Venus, and I think we cannot even get a monochrome image. My initial hope was a different conjunction--Earth passed within one degree of Jupiter in June while near greatest elongation from the Sun and close to maximum brightness. However, before that happened, the worst and longest of our dust storms hit. Not only did we not have the power for the observation, but the dust was so bad that we wouldn't have seen the planets anyway. So, for now we are stuck observing things farther from the Sun or brighter than the Earth. A few more moon images are planned, then possibly a lunar eclipse or two, and if we still have surplus power in a month or so we may see a meteor shower. While our power situation may be worse, we have another chance (Earth + Jupiter + maybe Venus) in February or so--at a time when Mars tends to be less dusty."

Too bad about the Earth and Venus shot, but I am greatly enjoying all the other astronomical photos that Spirit has been taking.