Developed using Planetary Society member support and expert science and engineering teams, LIFE flew on the failed Phobos Sample Return mission. LIFE uses a specially developed, incredibly rugged, multiple sealed, 88 gram “biomodule” designed to safely hold a number of biological samples. LIFE is a test of one aspect of the "transpermia" hypothesis: the possibility that life can move between nearby planets inside rocks ejected into space by impact events. The passive biomodule would act as a simulated meteoroid in deep space (beyond the Earth’s magnetosphere) and experience the high radiation and microgravity aspects of that trip, while ensuring separation and containment of microbes. Organisms flown are selected to be diverse non-pathogenic (not dangerous to humans) organisms that are well characterized and in most cases are extremophiles (able to survive in extreme environments). 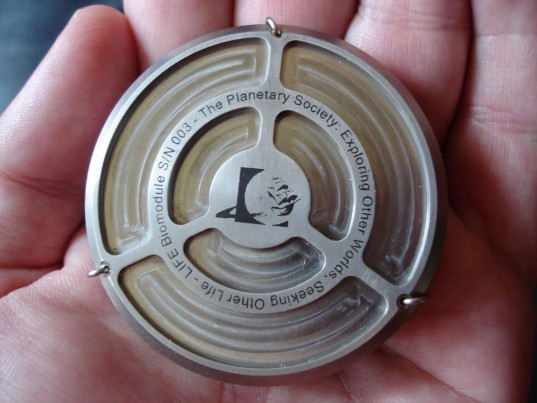 The LIFE biomodule, containing ten organism samples, is part of the Phobos Sample Return Mission. It is 56 millimeters in diameter, 18 millimeters in thickness, and weighs only 88 grams.

Portions of LIFE (a subset of organisms in just the sample tubes) flew on the second to last space shuttle mission STS-134. That “Shuttle LIFE” experiment, though successful and useful as a run through test and for basic science results, was limited in terms of revolutionary new science since it flew only for a brief time and in low Earth orbit.  ARM LIFE would carry out exploratory science with the first long term test of survivability and effects on life outside the protection of the Earth’s magnetosphere. Results may be relevant not only to understanding transpermia, but also to understanding more general effects on living organisms in deep space. The basic engineering concept to explore is integrating the LIFE biomodule into the ARM spacecraft in such a way that it could be recovered several years later by astronauts on the planned subsequent mission to the asteroid rock that has been redirected into lunar orbit. 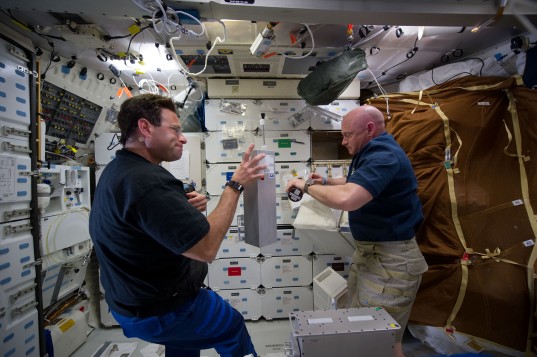 In the selected study, we will form a candidate science team, review previously selected organisms in light of the ARM mission, review Phobos LIFE microorganism handling and study plans in light of ARM, and develop a preliminary approach to ARM spacecraft accommodation with the spacecraft team, and evaluate preliminary requirements for astronaut retrieval of the biomodule and its return to Earth.

For this study, I am the principal investigator, Director Emeritus Louis Friedman, the originator of the original LIFE experiment concept, is the co-investigator, and we plan to engage many of our past LIFE science and engineering team members as well as coordinate closely with NASA. The Planetary Society did not request money from NASA for this study, and will rely on support from members and donors. This study is sponsored in part by the Gelfand Family Charitable Trust, which was the prime sponsor for the development of the original Phobos LIFE and Shuttle LIFE projects.

Help The Planetary Society study the effects of space on life:

Ah, now I see why the Planetary Society came out with a statement supporting ARM.

Has there been any consideration of doing this with other planned sample return missions. Would be interesting to get more data from different durrations and trajectories. Would be awesome if somehow this could be sold to the space exploration community to be so cool that they all want to sign up.

To Stephen: we have tried and will continue to try to get this on other sample return missions. We concur that it would be awesome if all sample returns included this :) To Andrew: the Planetary Society statement on ARM was produced independently of consideration of this LIFE study, and preceded this study, and we do not receive NASA funding for this study.

My Name is Michael C.Grant.Iam a scientist/educator/radio broadcaster. I have a profound interest in the facultation of lifeforms,whether xenemorphic or anthropomorphic as they transition from environment to environment. The conclusiveness of such transitions and the corresponding evaluations of the resultant data, may provide us with modalities for formulation of protocols facilitating Terraforming of environments on planets beyond earth,such as Mars.