The skies near China's Mongolian border were brightly lit Thursday night by the exhaust of a Long March rocket, as China's first space station soared into low-Earth orbit. According to Chinese human spaceflight commander-in-chief Chang Wanquan, the launch was a success, slipping TianGong-1 into orbit at an altitude of approximately 300 to 350 kilometers (for comparison, the International Space Station orbits at about 350 kilometers). 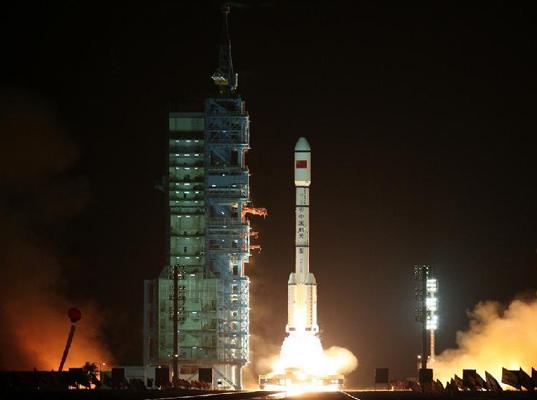 TianGong, whose name means "Heavenly Palace" in Mandarin, is part of China's effort to construct a 60-ton space station by 2020 that will compare in size to Russia's late Mir outpost. TianGong-1 will be used to practice docking techniques, a crucial skill that must be mastered by before China's space program embarks on more ambitious missions. The space station consists of two cylindrical sections: a resource module containing power and propulsion, and an experiment module for working and living. Totalling 10.4 meters in length, TianGong-1 is scheduled to start receiving visits from China's Shenzhou spacecraft in early November.

Shenzhou vehicles are similar in design to Russian Soyuz spacecraft. In 2003, it was Shenzhou-5 that carried China's first Taikonaut, Yang Liwei, into space for a day-long expedition. In November, the non-crewed Shenzhou-8 will be the first vehicle to visit and dock with TianGong-1. If all goes well, Shenzhou-9 should carry a crew of three Taikonauts to the station for a stay of around two weeks in 2012. In either late 2012 or early 2013, another group is expected to visit on Shenzhou-10, which is rumoured to feature China's first female Taikonaut.

China bases its human spaceflight operations from the Jiuquan Satellite Launch Center, located in north central China's Gobi desert. The Long March 2F rocket that carried TianGong into orbit was stacked upright at the center's Launch Vehicle Vertical Assembly Building (think: NASA's Vehicle Assembly Building) before being rolled out to the launch pad. The success of the launch was an important milestone for the Long March rocket series; on August 18, a Long March 2C rocket suffered an upper stage failure, sending an experimental research satellite crashing to the ground. The Long March 2F that carried TianGong-1 to orbit is derived from the 2C series.

To see the latest pictures from Thursday's launch, head over to the Xinhua News Agency's website (Xinhua is China's official press agency). For a fan-based perspective of the Chinese space program, you can also visit the Go Taikonauts! blog.