May 14th, 2013 - The day started early, as days in Washington tend to do. I was up before my alarm, already thinking about the day ahead of us: a day of meetings, events, handshakes, introductions, and effort. The Planetary Society was in D.C., and we were there to help save Planetary Science.

Planetary Science, the division of NASA that manages all robotic solar system exploration missions, faces another round of debilitating cuts. We successfully argued for Congress to reject the majority of cuts last year, but they were re-proposed in the President's 2014 budget. If these cuts go forward, NASA will go "radio dark" in most areas of the solar system by the end of the decade. Major missions to Europa and Mars will not happen in the foreseeable future, and we'll lose the industrial and scientific base built over the past few decades. There is a lot of hyperbole in advocacy writing, but trust me, these are facts. 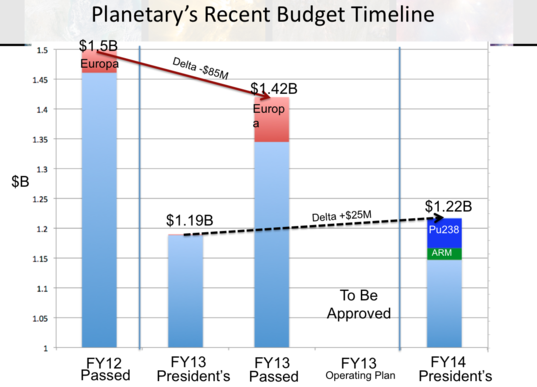 Differences in the actual budgets of NASA's Planetary Science Division compared to recent Presidential budget requests. The increase in 2014 is entirely due to moving Plutonium-238 funding into the program (from the DoE) and additional money for asteroid detection in service of the proposed asteroid retrieval mission. At the time of this chart, NASA's FY13 operating plan details were not known.

Now, various staff members from the Planetary Society travel out to D.C. on a semi-regular basis as part of our ongoing effort to stay engaged with the political process. It's usually either me or Bill Nye with our on-the-ground lobbyist/consultant, Bill Adkins. But today was different, we had additional guests: our COO Jennifer Vaughn, Planetary Society President Jim Bell, and Emily Lakdawalla in addition to CEO Bill Nye, Bill Adkins, and myself. We were also hosting a special luncheon in the Capitol building (mainly for congressional staff) and had a marathon of meetings throughout the day.

We started right away with Diana Simpson, a Professional Staffer on the Commerce-Justice-Science Subcommittee in the House of Representatives. This committee appropriates funding to NASA (among other agencies related to, well, Commerce, Justice, and Science). Our argument, when we meet with staffers, builds on the huge amount of support we've seen for Planetary Science at NASA from the public, and points out that the taxpayer gets a huge bang for their buck by funding Planetary Science at the minimum level of $1.5 billion per year (less than 9% of NASA's entire budget). It's an effective, affective, efficient, and productive program that supports a wide array of missions, scientific research, technology development, and public engagement. It's a part of NASA that works.

We walked briskly (when you're in the Capitol building, you do a lot of brisk walking between places) over to the Senate side to meet with the Commerce Subcommittee on Science and Space. That's an authorization committee (if you don't know the difference, that's probably a good thing, but I will go into the depths of that in a future post, but essentially means they can help set policy but don't directly control how much funding one program gets over another).

Just before noon, we (again, briskly) walked over to our room which we had reserved in the Rayburn office building (adjacent to the capitol) and met our guests for the special luncheon we were sponsoring to celebrate planetary exploration in the U.S.

Our luncheon was part informational, part inspirational, as we attempted to raise fundamental awareness of the many, many great things that planetary exploration can achieve both scientifically and motivationally, both by discovering new worlds and new budding scientists, by driving technology development to do something once thought insane (SkyCrane, anyone?) and by driving crowds to join together in Times Square at an insane hour on a Monday morning to watch NASA achieve something incredible. It's a unique program that combines multiple disciplines of science to understand the evolution of new words and our own, to understand the distant to provide perspective on the immediate, to actually go out there, in search of something that we can't dream up here at home. It's a precious resource that has been carefully cultivated over the decades that can't be easily recreated. We argued this over and over again, and reminded them that all it took was a mere $1.5 billion a year to ensure a strong program of exploration.

The Director of NASA's Planetary Science Division, Dr. Jim Green, gave an overview of the exploration of asteroids and "small bodies" of the solar system, with a particular focus on OSIRIS-REx, the asteroid sample retrieval mission now in development. Our own Planetary Evangelist, Emily Lakdawalla, evangelized to the crowd with a passionate overview of active missions scattered throughout the solar system, from Mercury to the edge of interstellar space. She also highlighted the dismal future, particularly for outer planets exploration, that we now face due to cuts in the program.

Bill Nye, the Science Guy, emceed the event and engaged the panel, a veritable all-star table of planetary scientists and engineers, including Jim Bell, who, in addition to being the President of the Planetary Society is also the Principal Investigator for the cameras on Spirit and Opportunity, as well as a member of the science team on the Curiosity cameras and a number of other missions; Ellen Stofan, who led the team that proposed the Titan Mare Explorer (TiME, aka the Titan Boat) and is currently on the science team for the Cassini mission at Saturn; Emily Lakdawalla, who many of you already know; and Bobak "Mohawk Guy" Ferdowsi, systems engineer at the Jet Propulsion Laboratory and currently working on the Curiosity mission.

We had a strong turnout of key committee staff members and others who work with science policy issues in Congress, as well as a visit by the House Science Committee's Chairman, Rep. Lamar Smith. We had a good show.

We didn't have a chance to catch our breath afterward, as Emily and I broke off to meet Mischa Fisher, the Legislative Director for Rep. Randy Hultgren, a great science advocate out of Illinois, while Bill Nye and Jim Bell went and met with the Space subcommittee staff in the House.

Our final meetings were with Tom Culligan, the Legislative Director for House Appropriations Chairman Rep. Frank Wolf, and then Rep. Adam Schiff himself, one of the strongest proponents in Congress for NASA's Planetary Science program.

These visits, while many, shared a common theme: people in Congress know and appreciate Planetary Science. They see the value and want to support it.

We also heard from multiple people that we've made an impact and increased awareness of this issue. That our members are exceptional at writing their representatives and stating their support clearly and forcefully. These letters you have written (you have written, haven't you?) are making a difference.

The problem, of course, is money and priorities.

NASA has lots to do: Commercial Crew, the Space Launch System, Orion crew capsule, James Webb Space Telescope, Earth Science, and maybe this new asteroid retrieval mission. All of these seem to be prioritized at a higher level than Planetary Science. And NASA's budget is shrinking. Post-sequestration it was around $16.8 billion. The House and Senate will have to agree to a number that, if we're lucky, will be close to this amount, which is almost $1 billion less than the President requested this year. This squeezes these priorities even more, and even though we argue it's possible to move small portions of NASA's budget here and there to bump up Planetary Science to $1.5 billion per year (very similar to what they did last year), there are a lot of factions arguing for that piece of the pie.

Plus, as we have seen, NASA itself seems intent on raiding Planetary Science's budget in order to fund other programs. The White House and NASA don't value Planetary Science the same way Congress does.

We change this, of course, by staying engaged and part of the process. Congress, as I said earlier, is largely on our side. Don't take this for granted: very few organizations or constituents get to say that. But NASA needs to change, too. Curiosity gave them their biggest public success in years, and regularly engages millions of people as the mission progresses. There are some tough times coming for NASA, and we think it's wise for them to invest a small money in the program that has shown it can generate a big return: Planetary Science.

Our advocacy efforts will continue throughout the year. We now wait for the first appropriations bills to come out of the House and Senate, hopefully sometime in June. These represent the first official detailed reactions to the President's budget by both houses of Congress, and how Planetary Science fares in those documents will set the stage for our efforts to come. If we see Congress clearly rejecting cuts to Planetary in these early stages, it will be much easier to see this support through to the end of the year, when a budget will be passed (hopefully!) before October 1st.

We are also closely following the NASA authorization legislation, which will set overall agency priorities for the next several years. This is working its way through the House and Senate on a different track than the funding bills. We are working to encourage Congress to include strong language in support of Planetary Science in that bill.

Of course, none of what we're doing in Washington, D.C. is possible without the generous support of members and donors. Flying half-a-dozen people out to D.C. for a few days isn't cheap, nor is employing an on-the-ground consultant, or spending staff time to research, blog, and stay engaged in policy issues. We are the one organization lobbying for Planetary Science for no other reason but our deep desire to see more of it. We try as hard as possible to represent the public at large when we travel to the Hill. But it's our members to whom we owe the most. Thank you to each and every one who has written, called, and donated on behalf of this effort.

We've had a rough road over the last year and a half. There have been great successes (the FY13 final funding bill) and major disappointments (the reprogramming of funds away from Planetary Science in 2013), but we're building a stronger, more consistent, and more engaged advocacy program here at the Society. With every new submission of a petition to Congress, or dollar donated, or tweet retweeted, we're a step close to a bright future of solar system exploration. An engaged public constituency must happen for exploration – both human and robotic – to survive and thrive. It's a sight to behold, and it drives me and others here at the Society when we get up, even extremely early, every day.

Note: If you like the pictures included in this piece, you're not alone. We were fortunate to have Navid Baraty travel from New York City to donate his skills documenting our trip for the Planetary Society. He's the photographer who took these amazing pictures of people watching Curiosity land in Times Square. The Planetary Society wishes to extend our gratitude for his help.