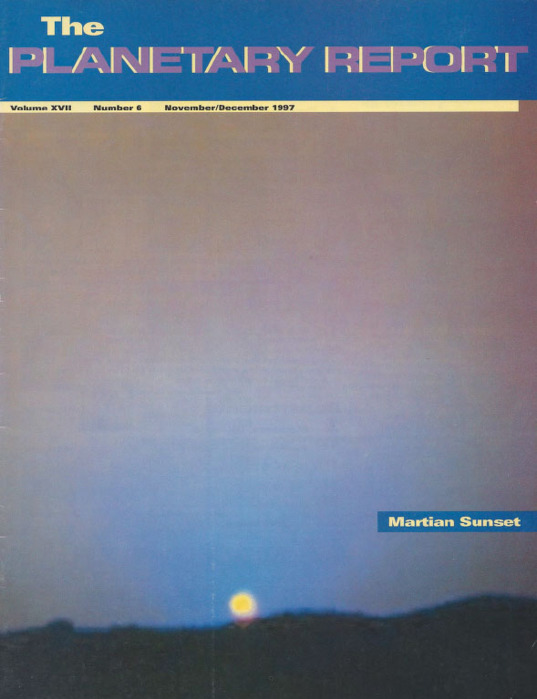 On the Cover: The Sun sets on another exciting and productive day on Mars for the Pathfinder lander and the Sojourner rover. Pathfinder's camera collected this picture on Sol 24, the 24th Martian day of the mission. The blue and red of the sky are about the same as they would appear to the human eye, but the Sun itself is overexposed—it would appear nearly white or slightly blue. As the spacecraft landed on July 4, 1997, thousands celebrated at Planetfest '97, a festival of exploration sponsored by The Planetary Society. There Tony Spear, Pathfinder project manager, announced that the lander had been named the Carl Sagan Memorial Station and that it had carried the names of 100,000 Society members to the Martian surface.
JPL / NASA

4 Planetfest '97: Jennifer Vaughn gives a report on a few of the highlights of this year's event.

5 A Martian Walkabout: Charlene Anderson takes a stroll around the Pathfinder landing site to familiarize us with a landscape that we'll soon come to know better with the Sojourner rover.

10 Mars Life? One Year Later: Bruce Jakosky updates us on the state of research on the possible detection of evidence for life in the Martian meteorite ALH84001, one year after its discovery.

14 The Man Passing By on His Way to the Moon: Bevan French gives a touching memorial to Gene Shoemaker, one of the world's greatest planetary scientists.

16 Basics of Spaceflight Where are they now?

18 News & Reviews Can the public love (and support) robots?