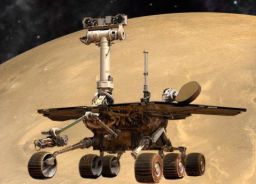 Opportunity found the gypsum last month in a striking light-toned vein "running" through bedrock. The vein, which the team dubbed Homestake, is small, but the rover easily spotted it in late October as it was as it driving north/northwest along the western edge of Cape York on the rim of Endeavour Crater. By the first week in November it was checking out the vein with its scientific instruments.

"The morphology of this just screams water," Squyres said.

Opportunity found Homestake and other veins like it in an apron or Bench, as the team calls it, that surrounds a segment of the rim of Endeavour Crater, a zone where the sulfate-rich sedimentary bedrock of the plains meets older, volcanic bedrock of the rim.