Returning a sample from asteroid Ryugu

Hayabusa2 (はやぶさ2) is a mission to survey a near-Earth asteroid and collect a surface sample for return to Earth in 2021. The spacecraft arrived at asteroid 162173 Ryugu (just ‘Ryugu’ for short) on 27 June 2018. Asteroids like Ryugu are time capsules that can teach us more about the origin and evolution of the solar system. Learning about them also helps efforts to defend Earth from potential asteroid impacts.

Hayabusa2 completed 2 successful touchdowns and sample collections in 2019. The second touchdown collected material excavated from an artificial crater created using explosives and a copper projectile. The spacecraft also carried 4 deployable surface landers — 3 of which have been successfully dropped on the surface — and 5 target markers containing names collected by The Planetary Society and JAXA.

Hayabusa2 is a follow-on mission to JAXA’s successful Hayabusa, which visited S-type asteroid (25143) Itokawa and returned a sample on 13 June 2010. Hayabusa’s samples proved that S-type asteroids (the most common in the near-Earth asteroid population) are the parents of ordinary chondrite meteorites.

When Hayabusa2 was approved in 2010 it had a cost estimate of nearly $200 million. Various non-U.S. media outlets now report the current cost as ¥30 billion ($260 million). 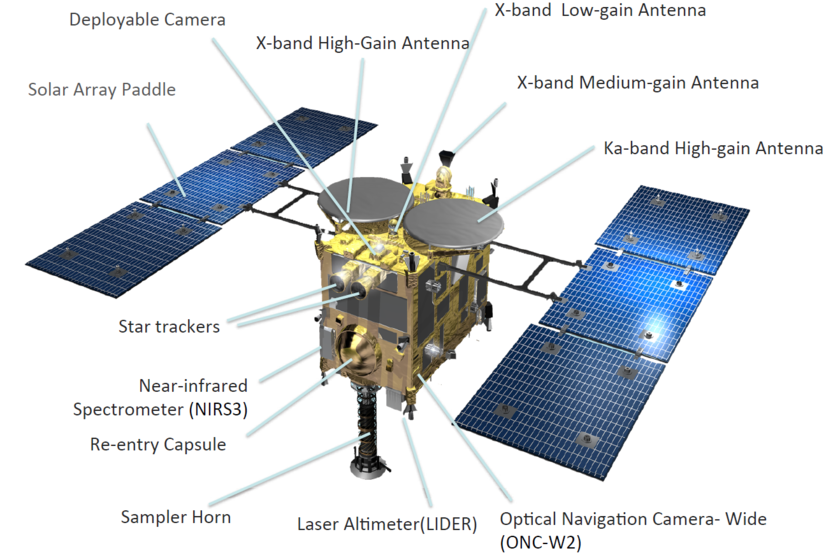 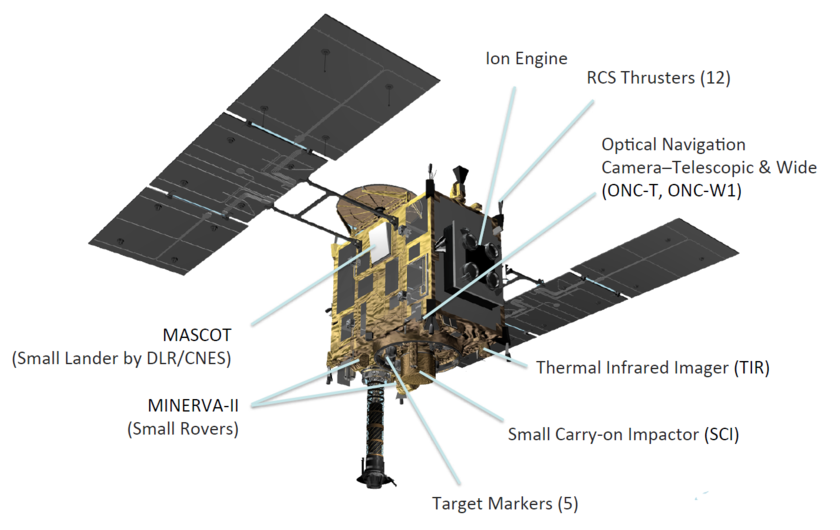 Used to create an artificial crater on Ryugu’s surface, uncovering materials not currently exposed to space. Consists of a small deployable box of explosives and a lump of copper (used to differentiate the impactor from native Ryugu materials). Hayabusa2 will release the explosive box, fire its reaction control thrusters, and hide behind Ryugu while the box explodes and shoots the copper lump into the surface at about 2 kilometers per second, creating a crater a few meters in diameter. Principal investigator: Masahiko Arakawa. Saiki et al. (2017) | Yoshikawa et al. (2014) | Tsuda et al. (2013) | July 2018 fact sheet

After deploying SCI, several tens of minutes before the explosion, Hayabusa2 will release this instrument, a cylinder 78 mm in diameter and 80 mm tall. It contains two cameras to capture the explosion and crater formation: a low-resolution analog imager that will transmit to Hayabusa2 in real-time (DCAM3-A, color, viewing angle 71º x 53º, 720 x 526 pixels, resolution 10 m/pixel) and one high-resolution digital imager that will send data to Hayabusa2 after the crater impact (DCAM-3-D, monochrome, viewing angle 74º x 74º, 2000 x 2000 pixels, resolution 1m/pixel). The system is IKAROS heritage. A separate component on the spacecraft will receive the DCAM3 images and also has a small camera head (DCAM3-CAM-H) that can take images of the Hayabusa2 sampler horn. Sawada et al. (2017) | Ogawa et al. (2017) | Ishibashi et al. (2017)

Other instruments and technologies

Hayabusa2’s sample system is similar to that of Hayabusa, with minor improvements. The system consists of a one-meter-long sample horn, a sample catcher, a sample container, and an Earth re-entry capsule.

When Hayabusa2’s sample horn touches the surface, it fires a tantalum projectile into the surface within the sample horn, kicking up surface material. The use of tantalum allows sample material to be distinguished easily from impactor material. The material floats up the horn, through a 90-degree turn, and into a sample catcher. Just 1 second after touchdown, the spacecraft fires its thrusters for ascent to avoid tipping over. The sample horn also contains a catch at the bottom opening to allow small pieces of gravel to stay in the horn. When Hayabusa2 decelerates, any caught gravel pieces can tumble up the horn into the sample catcher. The catcher itself has 3 collection compartments.

The spacecraft has five, baseball-like target markers that can be dropped on Ryugu to help with navigation. Each target marker contains a list of names collected by The Planetary Society.

Hayabusa2 carries three drum-shaped rovers designed to hop across Ryugu. MINERVA-II-1 consists of two rovers: Rover-1A and Rover-1B. Both were successfully deployed on 21 September 2018. MINERVA-II-2 is a third, larger rover that isn’t believed to be working properly, but may be deployed anyway. Principal investigator: Hirohide Demura.

Hayabusa2's first touchdown and sample collection site (Tamatebako) is located on Ryugu's equator, roughly between Kintaro crater to the west and Brabo crater to the east. It was chosen for safety reasons, because it had no rocks larger than 60 centimeters.

The second touchdown and sample collection site (Uchide-no-kozuchi) is also on the equator, east of Brabo crater and just west of Kolobok crater. It was chosen due to its proximity to the artificial crater created during the SCI experiment. The SCI site was a relatively hazard-free spot geologically similar to the first touchdown site, allowing for an above-and-beneath-the-surface comparison. 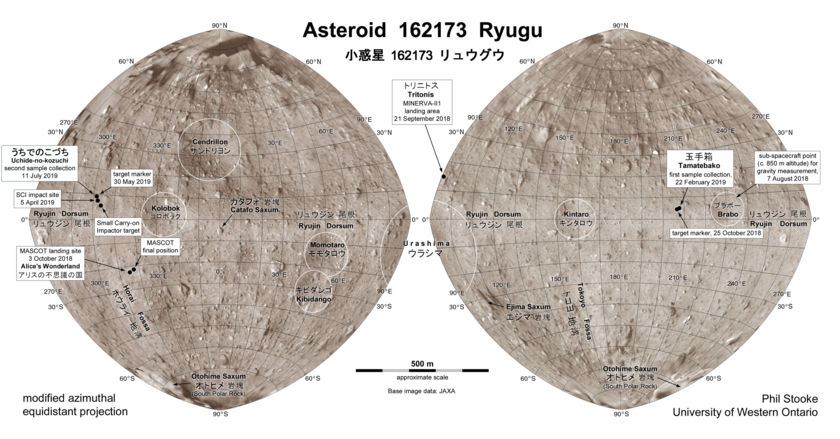 Ryugu's surface with labeled major features and locations, as of August 2019.