A pinpoint landing in the Ocean of Storms

Apollo 12 was the second mission to land humans on the Moon. NASA astronauts Pete Conrad and Alan Bean landed in Oceanus Procellarum, the "Ocean of Storms," on 19 November 1969 while Richard Gordon remained in lunar orbit inside the Apollo command and service module. Conrad and Bean made a pinpoint touchdown near NASA’s robotic Surveyor 3 spacecraft, which had landed 2 years earlier. 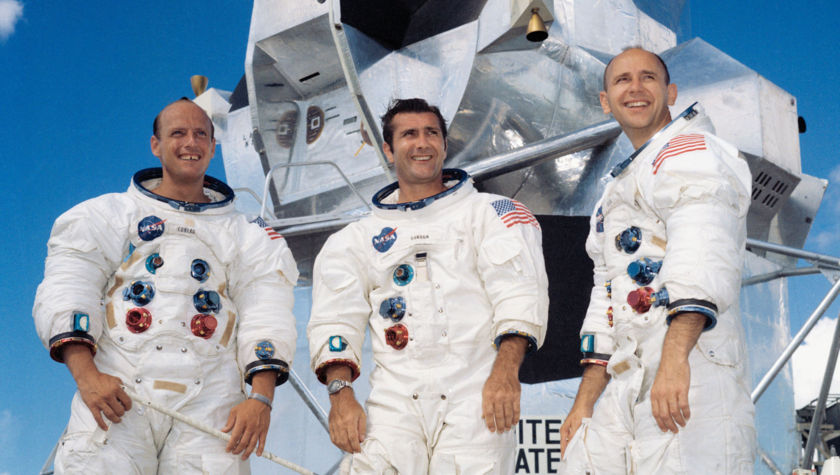 The Apollo 12 crew launched from Cape Canaveral, Florida on 14 November 1969 into rainy skies. Lightning struck their Saturn V rocket twice during ascent, knocking out the crew’s attitude control indicators and switching power for the command and service module from fuel cells to batteries. A quick-thinking flight controller prevented an abort by recommending the crew flip an obscure switch in the command module: "Try SCE to AUX." Power from the fuel cells was eventually restored and the crew safely reached Earth orbit. After a thorough checkout of their vehicle for any permanent damage, they ignited the Saturn V upper stage and departed for the Moon. 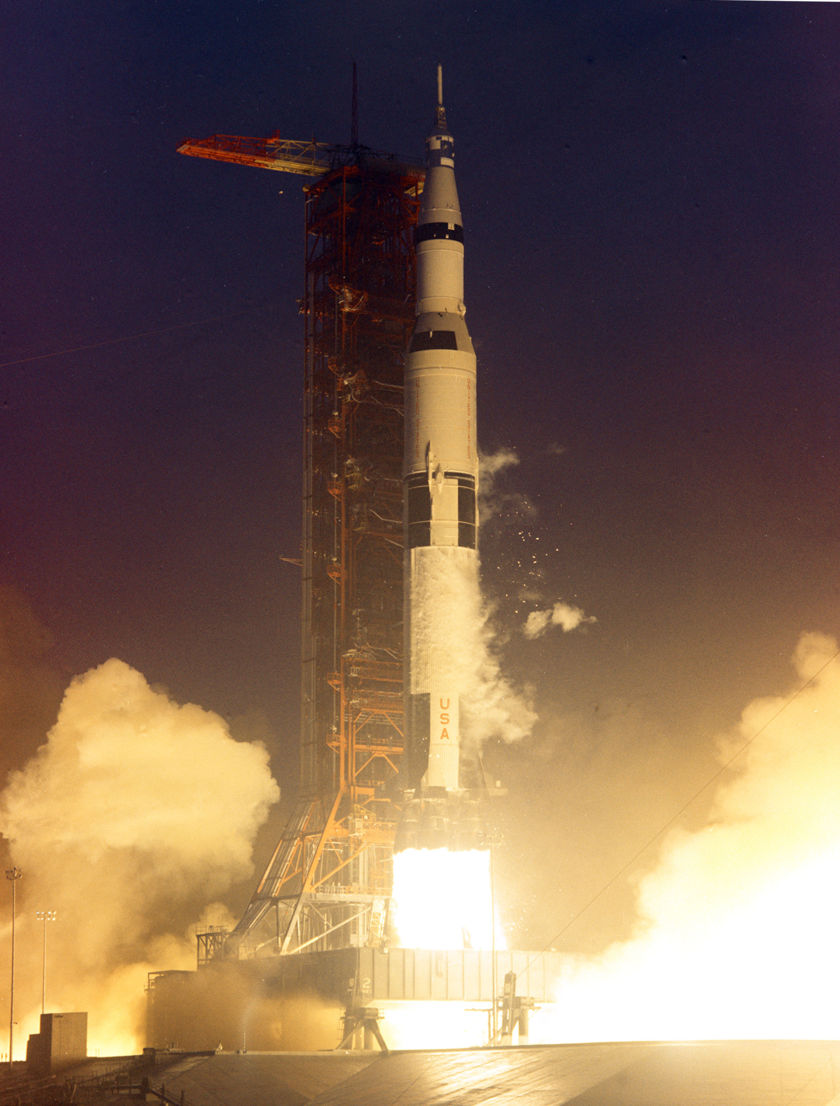 During the history-making landing of Apollo 11 four months earlier, astronaut Neil Armstrong had to take semi-manual control of the lunar module and steer it away from a hazardous boulder field and crater, ultimately touching down more than 6 kilometers away from his intended target. NASA wanted Apollo 12 to demonstrate a pinpoint landing so that it could send future Apollo crews to harder-to-reach scientific destinations. Fortunately, a lunar scientist named Ewen Whitaker had found the precise location of the Surveyor 3 spacecraft, giving the astronauts a target. Bean and Conrad successfully landed their lunar module about 160 meters away from the probe. 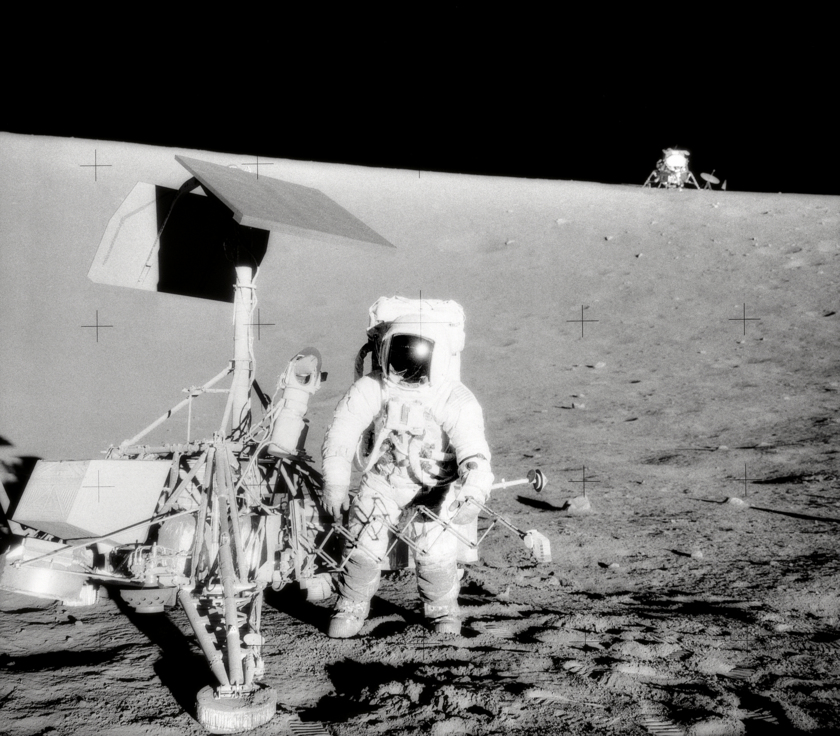 The astronauts performed two 4-hour moonwalks during their 32-hour stay on the surface. For the first excursion they collected surface samples and deployed the Apollo Lunar Surface Experiment Package, or ALSEP. The ALSEP included instruments to measure the Moon’s atmosphere (Cold Cathode Gauge), magnetic field (magnetometer), and interior (seismometer), as well as the solar wind (solar wind spectrometer). During their second trip outside the lunar lander, they visited Surveyor 3, removed its TV camera, and stowed it in the lunar module for return to Earth. Scientists later found bacteria inside the camera that may have survived 2 years in space, though some studies have suggested the bacteria got inside the camera after it was returned to Earth. 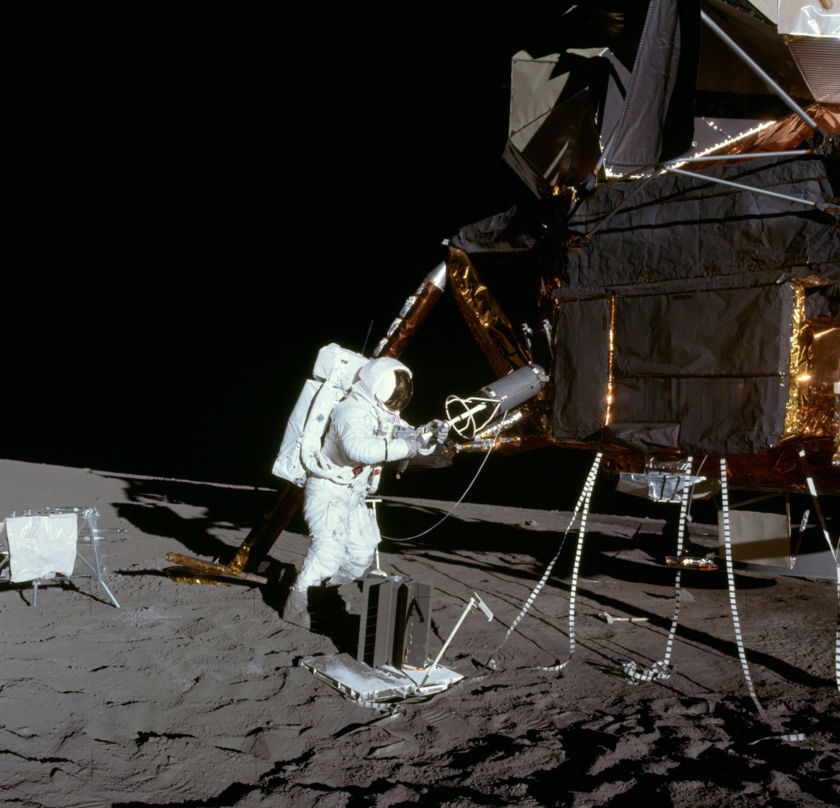 Apollo 12 astronaut Alan Bean removes the nuclear fuel element for the Radioisotope Thermoelectric Generator (RTG) that powered the science instruments deployed by the crew on the lunar surface.

Conrad and Bean blasted off from the Moon in their ascent module and rendezvoused with Gordon in lunar orbit. The trio’s return trip to Earth was uneventful, ending with splashdown in the Pacific Ocean on 24 November. 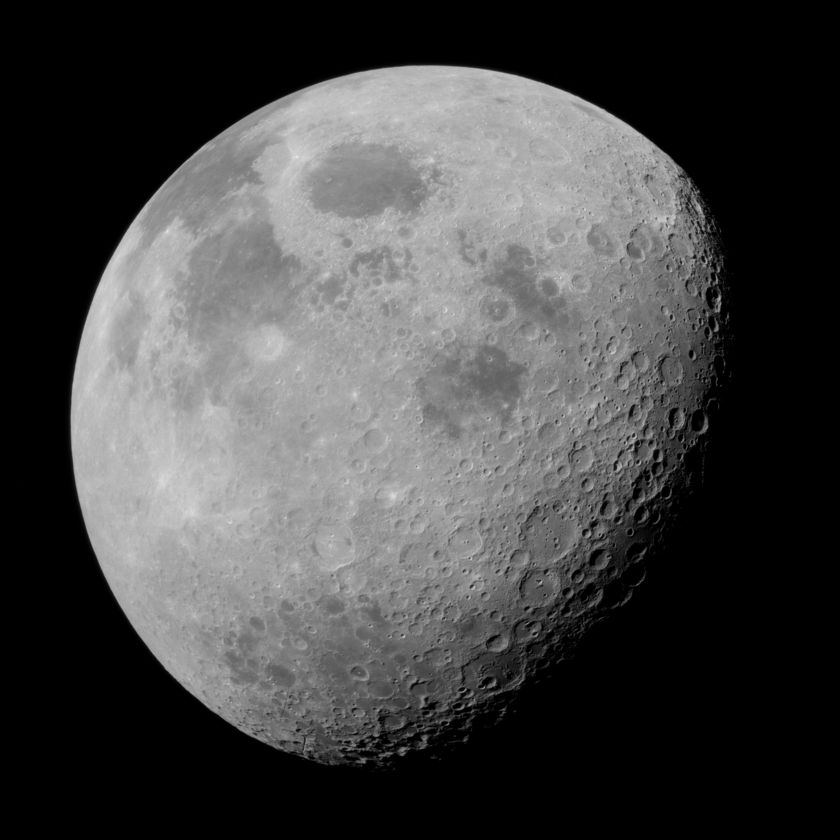 The Moon from Apollo 12

Apollo 12 astronauts took this picture of the Moon during their coast back to Earth.

NASA reported the marginal costs of Apollo 12 to be $375 million, broken down as follows:

Full costs of the Apollo program can be found on the The Planetary Society's "How Much Did the Apollo Program Cost?" page.