This tutorial was originally posted on PhotographingSpace.com and is reposted here with permission.

Step 1: Getting into the archive

The Hubble Legacy Archive is your direct connection to high-quality science data from our dearest orbital observatory, the Hubble Space Telescope. Despite appearing simple at first, it can be rather daunting for a novice to approach. I was dumbfounded during my first attempts, and without much guidance it took me months to feel comfortable with it and come up with some search strategies. Below I will describe two of those strategies, go over some of the cameras, and explain some of the most common acronyms and jargon.

Aspiring archive raiders can find the HLA at the following URL, which I suggest you keep open in a separate tab for reference: http://hla.stsci.edu/hlaview.html

Step 2a: Finding a target, reprocess an old image (easier)

If you are used to observing with your own telescope, you may initially be tempted to search for something very easy to view, such as Andromeda. That would be a confusing mistake. Imagine wanting a photo of someone’s face, but instead you are served up the individual hairs, pores, mites, and cells from some minuscule patch of nostril. That is what you’ll see in the Hubble archive—Andromeda’s face mites. Try it. Those are interesting, but perhaps not at all what we were expecting.

So, how do we go about finding something with more visual appeal? One tactic I have used is to browse old press release images. Twenty years ago, processing software and techniques were not as refined as they are today. This is not to say they were bad at it, of course. Remember Photoshop 4.0 and 800×600 CRT displays? Good old 1996. It’s easy to take for granted all the new features and processing power we now have at our disposal. Anyway, try finding a press release image that you don’t like the processing of. A fun task can be to try and find your own take on an old image, perhaps by adding newer observations to it or combining the filters in a way you find personally appealing. 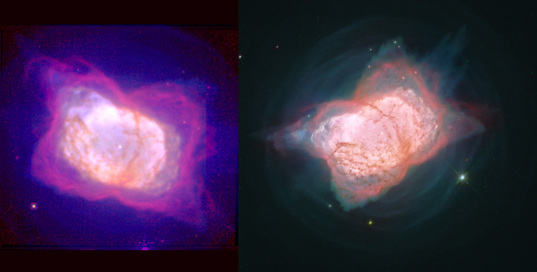 Left: A press release image of NGC 7027 from 1998. Right: Processing some of the same data with modern software.

Step 2b: Finding a target, searching for hidden treasures (harder)

Another option is an all sky search. This is useful if you don’t have anything in particular in mind and want to browse. Type 0 0 r=180 into the search field and use the advanced search option to untick all but one instrument. This will yield all available data from that instrument. Fair warning: The HLA becomes quite slow to load because of this, requiring some patience. Of the browsers I’ve tried, Firefox and IE are fine. For reasons unknown to me, Chrome is noticeably slower. 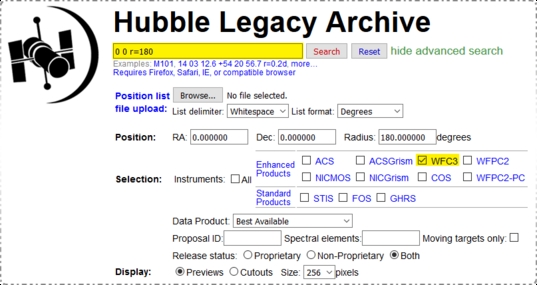 I like to sort the results by date, filter them down to one year, switch to 100 results per page, and browse by thumbnail. I also write down what page I’m on so that I may come back later where I left off. Filtering the results to only include a single year allows the page to load much more quickly. The fits2web image viewer, accessible via the Interactive Display link under each thumbnail, allow one to brighten and preview anything that looks interesting, saving oodles of time that might otherwise be wasted downloading what turn out to be huge duds.

One of the most confusing aspects of the HLA (indeed, any science archive) is confronting a multitude of new acronyms to learn. Hopefully I can explain away some of the confusion. Knowing what each means can make it feel a little more comfortable. I will focus on the four imaging cameras for now.

Some of the newer instruments have a number of imaging channels. To start with, let’s take the ACS (Advanced Camera for Surveys) for example. It has three channels, the WFC (Wide Field Channel), HRC (High-Resolution Channel), and SBC (Solar Blind Channel). These would be denoted in short as ACS/WFC, ACS/HRC, and ACS/SBC. Of these, most of the data you can find from the ACS comes from the WFC. The HRC and SBC have more specific uses, and the HRC was disabled a while back by an electrical fault.

Next up, the WFC3 (Wide Field Camera 3) has two straightforward channels to consider: UVIS (Ultraviolet and Visible) and IR (Infrared). You can find them using the same shortened forms WFC3/UVIS and WFC3/IR and by now you should easily spot the pattern. Instrument first, followed by a slash and the channel.

The final two imaging cameras, NICMOS (Near Infrared Camera and Multi-Object Spectrometer) and WFPC2 (Wide Field Planetary Camera 2), are older and come with significant aesthetic challenges to deal with. NICMOS in particular has a lineup of anomalies and artifacts that are especially difficult to deal with and WFPC2 (pronounced wiff-pick two, if you are wondering) has its special staircase or stealth bomber shape which can also be a major turnoff. The PC part of the WFPC2 can also be searched for individually via the search form.

Old is not useless

Whatever you find in the archive, just remember that nearly everything Hubble has imaged was and likely still is of high scientific value, so old doesn’t automatically mean useless—quite the contrary. If you have the time, it is worthwhile to check out each observation of a given object. You never know what you might find. I once found a supernova in some old WFPC2 data that managed to slip past astronomers. Due to the time frame, it wasn’t very useful scientifically, but it was a fun and unexpected find regardless.

An accidental picture of a supernova in NGC 3597

Step 4: Learn about the filters used on the Hubble instruments

Understanding the abbreviated syntax used in the Spectral_Elt (spectral element) column is rather simple. Here are some common examples of what you may see while searching the archive:

At first it may not seem obvious what these mean, but the pattern is easy to read once you know that F means filter, the numbers in the middle are the wavelength in nanometers, and the end denotes the general width of the filter; in this case, N = narrow, M = medium, and W = wide. You will also frequently encounter the word detection in your results, which refers to a stack of all exposures for any given observation, combining all filters into a single FITS file.

More information on an individual filter can usually be found within the instrument handbooks:

Note the WFC3 list in particular is very easy to read and contains an abundance of information all on one page. Oftentimes the information on that page is more than enough for you to know for any given instrument.

One important caveat regarding the filter abbreviations to remember is that for certain infrared observations, the wavelength exceeds 1000 nanometers, but only 3 digits are ever used. For example, F128N is actually a Paschen β (like Hα’s cousin, but you can see it through dust!) filter which peaks at 1280 nm, not some tiny wavelength ultraviolet filter.

When you’ve found your target and decided what spectral data from the instrument (camera) you want to get, click the FITS link in the Retrieve column to add the files to your “shopping cart.”

After you’ve added all the files and datasets you want to your shopping cart, click the file/datasets tab, and choose either a ZIP file with everything in it or the option download each file sequentially, since some of them can be pretty big. Then click the Fetch HLA Data button to commence downloading.

Confused? That’s ok. Working with proper scientific data isn’t easy, but can be rewarding and fun. Here’s a quick list of the steps to get you started:

1. Familiarize yourself with the HLA
2. Browse for a target
3. Download the appropriate files
4. Read the next installment of my Hubble series! (coming soon)