Astrometry is the science (and art!) of precision measurement of stars' locations in the sky. When planet hunters use astrometry, they look for a minute but regular wobble in a star's position compared to the positions of other stars. If such a periodic shift is detected, it is almost certain that the star is being orbited by an unseen companion planet.

How We Detect Exoplanets: The Astrometry Method

Exoplanets and their stars pull on each other. We can’t see the exoplanet, but we can see the star move. The star’s motion compared to other stars shows that an exoplanet exists. 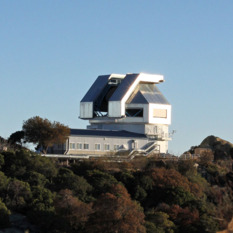 Astrometry is the oldest method used to search for extrasolar planets. As early as 1943 astronomer Kaj Strand, working at the Sproul Observatory at Swarthmore College announced that his astrometric measurements revealed the presence of a planet orbiting the star 61 Cygni. Although the announcement was greeted with enthusiasm at the time, the claim has remained unproven and astronomers today are highly skeptical of Strand's results. The tradition of planet hunting through astrometry nevertheless remained strong at Sproul, where Strand's announcement was followed decades later by two other contentious claims. In 1960 Sproul astronomer Sarah Lippincott published a paper claiming that the star Lalande 21185 was orbited by a planet of roughly ten Jupiter masses, and in 1963 the observatory's director, Peter Van de Kamp, announced the discovery of a planet orbiting Barnard's Star.

The fact that all of these claims, based on decades of meticulous observations, were subsequently cast into serious doubt, testifies to the immense difficulties confronting an astrometric hunt for planets. Until recently, the level of precision required to detect the slight shifts in a star's position that indicate the presence of a planet was at the outer edge of technological feasibility. As of February 2020 there is only one confirmed planet on the NASA exoplanet archive which is listed as an astrometric discovery, DENIS-P J082303.1-491201b, also known as VB 10b. However, followup radial-velocity observations of VB 10b did not detect the signal that would be expected based on the astrometric data, so most researchers consider it another false positive.

The European Space Agency's Gaia mission, which launched in 2013, is making wide-angle observations of more than a billion stars in our galaxy at an accuracy of around 20 micro arcseconds; its first data release was in September 2016. The Gaia catalog has already helped to refine exoplanet size estimates made from transit photometry, but has not yet yielded any more potential exoplanets. 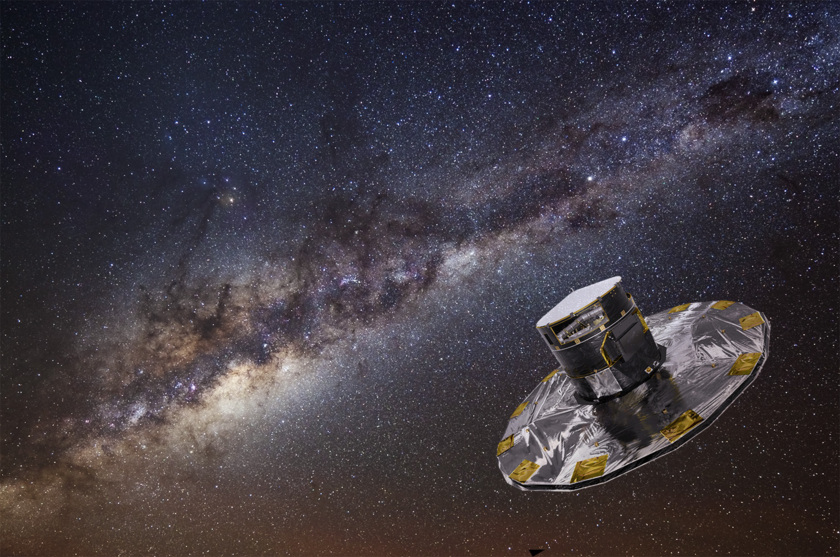 The European Space Agency's Gaia spacecraft, seen here in an artist's concept, will construct the largest, most precise three-dimensional map of our galaxy ever created.

Astrometry is one of the most sensitive methods for detection of extrasolar planets. Unlike transit photometry, astrometry does not depend on the distant planet being in near-perfect alignment with the line of sight from the Earth, and it can therefore be a applied to a far greater number of stars. Furthermore, unlike the radial velocity method, astrometry provides an accurate estimate of a planet's mass, and not just a minimum figure.

In several of its key characteristics, astrometry is an excellent complement to the spectroscopic method. Whereas spectroscopy works best when a planet's orbital plane is edge-on when observed from Earth, astrometry is most effective when the orbital plane is face-on, or perpendicular to an observer's line of sight. This is because astrometric observations cannot detect a star's displacement towards or away from Earth, as this does not produce any change in the star's position in the sky. Astrometry can only detect that component of a star's wobble that moves it to a different location in the sky - i.e. perpendicular to the line of sight of the Earth-bound observer. The closer a planet's orbital plane is to a face-on position when seen from Earth, the larger the component of its movement that can be astrometrically measured.

Furthermore, whereas spectroscopy is at its best in detecting planets with short periods, orbiting very close to their stars, astrometry will excel in detecting stars of long periods, orbiting further away. This is because a planet with a long orbit causes a greater displacement of its star's location during the course of its orbit than a planet that remains in close proximity to its star. In other words, in contrast to spectroscopy, the sensitivity of astrometric detections actually grows with the increasing distance of a planet from its star. This means that astrometry can, in theory, detect relatively small planets orbiting far from their stars -- a crucial advantage for scientists looking for Earthlike planets rather than the hot Jupiters favored by spectroscopy.

Discovering extrasolar planets through astrometry is extremely hard to do -- so hard that it hasn't yet succeeded. It requires a degree of precision that has seldom been achieved even with the largest and most advanced telescopes.

Even improved accuracy cannot change some fundamental limitations of the astrometric approach. Astrometry, by its very nature, is highly sensitive to the distance of a celestial object from Earth. This is because the same actual displacement in an object's position would appear as a greater change in position in the night sky if that object was close by than if it were further away. Therefore, while astronomers believe that astrometry will be very useful for detecting planets in the solar neighborhood, the method will be far less effective when applied to more distant objects.

Then there is the fact that even accuracy in measurement can have its drawbacks. The new astrometric measurements could be so sensitive that they might be affected by star spots - the darker regions on the face of a star that appear to move as the star rotates. When observed with the new highly accurate astrometric systems, this could create a periodic shift in the star's "photometric center" - the exact location in the sky where the star's light appears to be generated. This effect can create the illusion that the star is wobbling to the tug of a planet, when in fact it remains in its place.

Finally, there is an inherent difficulty in observing planets with long periods, the very planets that astrometry should excel in. In order to detect a planet, it is necessary to observe the repeated periodic displacements of its parent star. This means that the star needs to be observed for longer than a single orbital period. When dealing with planets of long periods, comparable to those of our own Solar System, this can obviously be a problem. A star must be observed continuously for years or even decades before the presence or absence of a planet can be established.