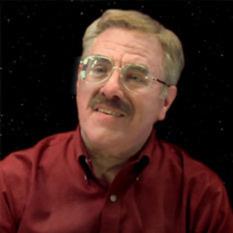 Rick Sternbach has been a space and science fiction artist since the early 1970s, often combining both interests in a project. His clients include NASA, Sky and Telescope, Data Products, Random House, Smithsonian, Analog, Astronomy, The Planetary Society, and Time-Life Books. He is a founding member and Fellow of the International Association of Astronomical Artists (IAAA), which was formed in 1981. He has written and illustrated articles on orbital transfer vehicles and interstellar flight for Science Digest. Beginning in the late 1970s Rick added film and television illustration and special effects to his background, with productions like Star Trek: The Motion Picture, The Last Starfighter, Future Flight, and Cosmos, for which he and other members of the art team received an Emmy award, the first for visual effects. Rick also twice received the coveted Hugo award for best professional science fiction artist, in 1977 and 1978.

With the rebirth of Star Trek, beginning with The Next Generation, Rick was one of the first employees hired to update the Trek universe. He created new spacecraft, tricorders, phasers, and hundreds of other props and set pieces. Using pencil, pen, and computer, Rick added Deep Space Nineand Voyager to his spacecraft inventory, and kept his hand in real space design with Voyager’s Ares IV Mars orbiter (blessed by planetary scientist Dr. Bruce Murray).

Rick contributed graphic designs for the recent Star Trek Nemesis feature film, including the new Romulan bird of prey and Senate chamber floor. He also provided computer playback graphics and animation elements for Steven Soderbergh’s Solaris, and is now at work on a variety of freelance projects related to spaceflight and space hardware modeling.