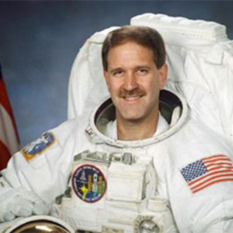 John M. Grunsfeld was named Associate Administrator for the Science Mission Directorate at NASA Headquarters in Washington, D.C. in January 2012. He previously served as the Deputy Director of the Space Telescope Science Institute in Baltimore, managing the science program for the Hubble Space Telescope and the forthcoming James Webb Space Telescope. Grunsfeld's background includes research in high energy astrophysics, cosmic ray physics and in the emerging field of exoplanet studies with specific interest in future astronomical instrumentation.

Grunsfeld joined NASA's Astronaut Office in 1992. He is veteran of five space shuttle flights, and visited Hubble three times during these missions. He also performed eight spacewalks to service and upgrade the observatory. He logged more than 58 days in space on his shuttle missions, including 58 hours and 30 minutes of spacewalk time. Grunsfeld first flew to space aboard Endeavour in March 1995 on a mission that studied the far ultraviolet spectra of faint astronomical objects using the Astro-2 Observatory. His second flight was aboard Atlantis in January 1997. The mission docked with the Russian space station Mir, exchanged U.S. astronauts living aboard the outpost, and performed scientific research using the Biorack payload. He also flew on Discovery in December 1999, Columbia in March 2002 and Atlantis in May 2009. This last flight successfully serviced and upgraded the Hubble Space Telescope, during which he was lead spacewalker for Hubble servicing activities. In 2004 and 2005, he served as the commander and science officer on the backup crew for Expedition 13 to the International Space Station.

Grunsfeld graduated from the Massachusetts Institute of Technology in 1980 with a bachelor's degree in physics. He subsequently earned a master's degree and, in 1988, a doctorate in physics from the University of Chicago using a cosmic ray experiment on space shuttle Challenger for his doctoral thesis. From Chicago, he joined the faculty of the California Institute of Technology as a Senior Research Fellow in Physics, Mathematics and Astronomy.