Does NASA get its money's worth for Antares-Cygnus flights?

What if Orbital ATK's Antares rocket went away? Would that be a bad deal for NASA?

These were the original questions that sent me tumbling down a rabbit hole of commercial spaceflight data. To be clear: There is no immediate indication Antares is going anywhere. But ever since Orbital ATK added the stalwart Atlas V rocket as an option for sending Cygnus cargo vehicles to the International Space Station, Antares' future has gotten fuzzier. Chosen in part to fill a perceived gap in U.S. launch capabilities, Antares has yet to find a role outside of shipping cargo the ISS.

But that's only part of the story. What's equally interesting is picking apart exactly how much NASA pays for a typical space station cargo flight, comparing the differences between providers, and looking at the commercial cargo program as a whole to see if it has lived up to expectations. 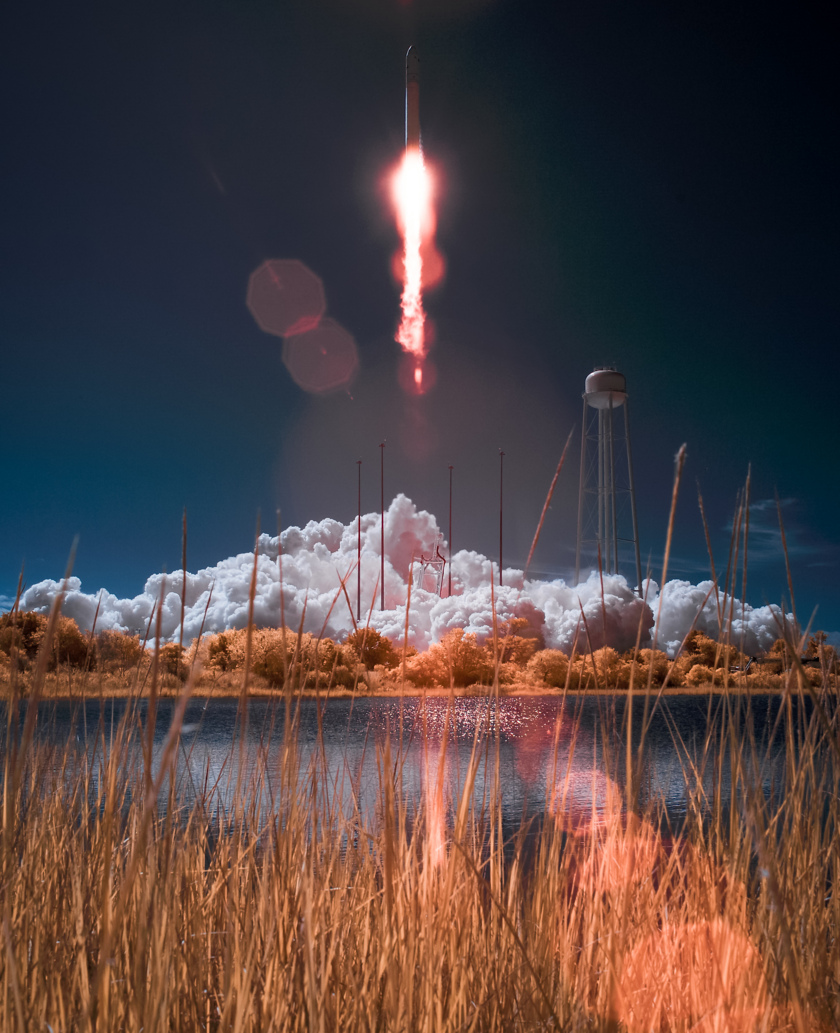 Antares has flown six times, all in support of NASA's commercial cargo program. Two were demo flights, a 2014 mission ended in flames, and the other three were successful, paid ISS cargo trips. Four more flights are planned to fulfill the company's contractual obligations under CRS-1, the first phase of NASA's Commercial Resupply Services program.

Thus far, no one but NASA has booked a ride on an Antares rocket. The 2014 accident didn't do the booster's reputation any favors, but as the chart below shows, Antares is fairly light-lift when it comes to the U.S. launch market. Orbital ATK also has two other offerings on its menu not shown: the air-launched Pegasus, which can carry about 450 kilograms to low-Earth orbit in a 1.2-meter payload, and the rarely used Minotaur, the most powerful version of which can haul about 3.1 metric tons to LEO in a 2.3-meter fairing. 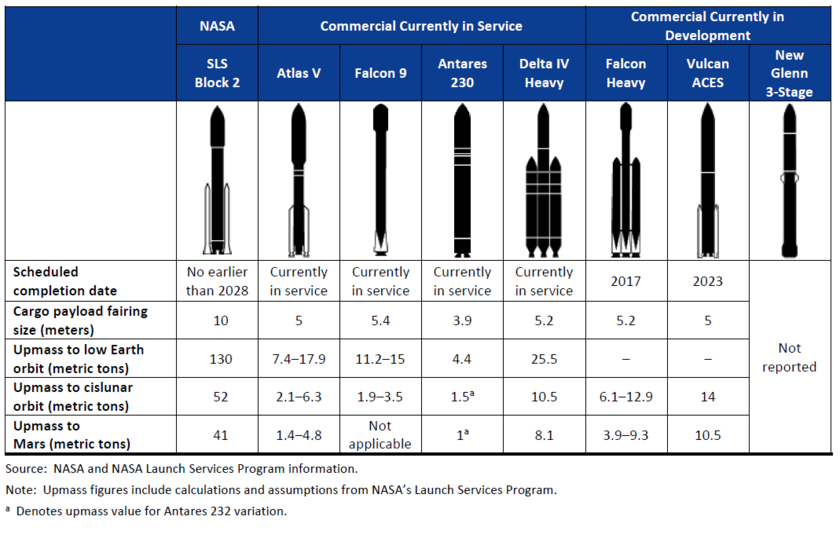 NASA could switch entirely to the Atlas V for future Cygnus flights. And Orbital ATK wants to build an Atlas V replacement

After the 2014 accident, Orbital scrambled to figure out what happened, eventually blaming the rocket's refurbished Soviet-era engines. In the meantime, they bought a United Launch Alliance-owned Atlas V to fly a Cygnus vehicle to the ISS. Because the Atlas V is more powerful, NASA and Orbital were able to squeeze more cargo into Cygnus, increasing its mass capacity from 3,200 kg to 3,513 kilograms. By using Atlas, Orbital realized it could fulfill its contractual obligation to fly 20 metric tons of cargo to the ISS in seven Cygnus flights instead of eight.

The company's final four CRS-1 cargo flights will use Antares, but all of this shuffling around has very much put the Atlas V in play for CRS-2, the second round of ISS cargo flights that will begin in 2019. Orbital ATK, SpaceX and Sierra Nevada are the winning CRS-2 providers, but no missions have yet been awarded.

"NASA hasn't actually told us which missions they'll want on which vehicles, and that's part of the contract proposal we made to them," said Orbital ATK space systems group president Frank Culbertson during an April 17 press conference. "So we're waiting to see which way they'd like to go, whether it's a mix or all one or the other."

Capping the Antares uncertainty is Orbital ATK's development of a larger rocket called the Next Generation Launch System, or NGL. NGL development has been supported by the U.S. Air Force. In 2016, the Air Force awarded contracts to Orbital ATK and SpaceX to spur development of possible replacements to the Atlas V, which uses Russian-built engines. Another round of Air Force contract awards are expected next year.

The competition, however, could be steep. And United Launch Alliance already has its own Atlas V exit plan: the Vulcan.

How much does NASA pay for a Cygnus flight, anyway?

Determining how much NASA actually pays for a typical Cygnus cargo flight (and while we're at it, a SpaceX Dragon cargo flight) to is surprisingly difficult to calculate. While NASA disclosed the initial terms of its CRS-1 awards, the agency was less forthcoming with details on CRS-1 extensions, citing its partners' wishes to keep financial details private.

Nevertheless, we can pull together some reasonable estimates. Here, to the best of my knowledge, are the amounts of money NASA has paid Orbital ATK and SpaceX for the current round of cargo flights, including development costs.

Dragon flights are cheaper, but Cygnus has some unique capabilities

Based on the above estimates, Cygnus flights are 1.86 times more expensive than Dragon flights. But to be fair, these are two different vehicles with different capabilities.

The current 'enhanced' Cygnus variant has more than double the pressurized volume of Dragon: 26.2 versus 11 cubic meters. That's an important capability for shipping voluminous amounts of food, water, crew supplies and science experiments to the ISS.

Dragon, on the other hand, has an unpressurized trunk for exterior station equipment, such as BEAM, the inflatable module attached to the station last year. Dragon can also return cargo to Earth—a vital and unique capability (besides the Soyuz, which also carries crew).

Cygnus pulls double duty as a dumpster, allowing astronauts to stuff it full of trash for incineration in Earth's atmosphere. That also allows scientists to use it for risky experiments, like learning how large-scale fires spread in space.

In terms of mass capabilities, Dragon and Cygnus are about equal. Cygnus can carry 3,200 kilograms to the ISS via Antares, and 3,513 kilograms with the Atlas V. Though SpaceX advertises Dragon's upmass capability as 6,000 kg to orbit, NASA's original agreement with SpaceX is for 3,310 kilograms, and indeed, that's the most Dragon has ever carried, during the aforementioned BEAM flight. (Here's my dataset.) On average, Dragons arrive at the station carrying 2 metric tons of cargo; Cygnus usually shows up with about 2.6 metric tons.

Dragon, however, has flown more. Its total ISS haul to date is 17.8 metric tons, while Cygnus is slightly behind, at 15.6 metric tons.

Here's a combined plot of Dragon and Cygnus ISS cargo deliveries during CRS-1: 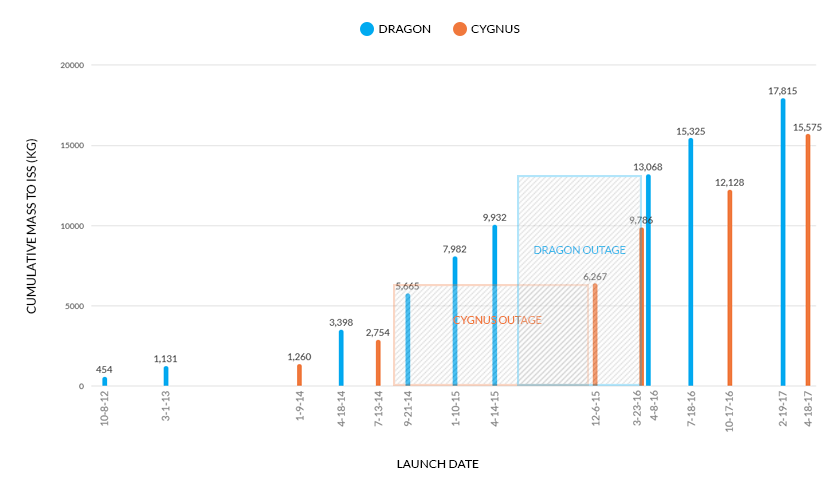 During the Cygnus outage in 2014, and Dragon outage in 2015, NASA leaned on its other partner. This highlights why the agency chose more than one cargo provider in the first place.

COTS and CRS-1 in retrospect

In Cooke's selection statement, he explained why he chose Orbital over Boeing, the other leading competitor.

"A significant discriminator between Boeing and Orbital is the market stimulation created by Orbital's new launch vehicle. The Taurus II will meet a real market need for a medium launch vehicle capability outside of support to the ISS in the areas of science missions and small satellite launches, which raises my confidence level that its development will be sustainable going forward. This meets the objective of the COTS project to stimulate a broad space transportation market for multiple customers."

The Taurus II, which was renamed Antares, has yet to find a home in the beyond-ISS market Cooke envisioned. It may never. Instead, Boeing's proposed rocket, the Atlas V, figures to be a key part of the International Space Station's future. It will, at the very least, be used to launch Sierra Nevada's Dreamchaser cargo spaceplane and Boeing's Starliner crew capsule.

Also in Cooke's selection statement, there's an overview of why NASA's commercial spaceflight program exists in the first place:

By that benchmark, the program is doing quite well.

Cygnus is more expensive, and Antares hasn't become the market-shaking launcher NASA originally envisioned. But the dual-provider strategy has been crucial to the success of the agency's commercial spaceflight program, and that plan persists as America's ISS resupply capability evolves from cargo to crew.

The discrepancy in SpaceX's CRS-1 extension 2 amount: This is probably because the FAA number covers both extension 1 and extension 2, i.e. $1.2 billion = (3 + 5) x $150 million. This SpaceNews article estimate extension 2 is only $700 million: http://spacenews.com/spacex-wins-5-new-space-station-cargo-missions-in-nasa-contract-estimated-at-700-million/ As for Orbital's extension amount, I suspect here's how FAA comes up with the number: 2 x ($1.9 billion / 8) = $475 million, i.e. it's for 2 missions at original CRS-1 price.

Nice Article Jason! There is one significant point in value of the Dragon that was omitted, and that was the ability to return cargo to Earth. At the moment Dragon is the only way to get "stuff" back from ISS other than riding down with the cosmonauts/astronauts.

Jason, you shouldn't include the development funding in your calculation when considering operational costs. Also, you should be explicit about the fact that the development (for both providers) was of not only the launchers but also of the spacecraft.