BEAM expanded and pressurized: Your news, commentary and tweet roundup

BEAM is expanded and pressurized! The International Space Station's newest module, which will serve as a technology demonstrator for in-space expandable habitats, was fully filled with air this afternoon.

NASA and Bigelow originally expected the procedure to take about 45 minutes. But that assumption went out the airlock Friday when BEAM barely budged after three hours of attempts to slowly fill it with station air.

During a seven-hour work session today, astronaut Jeff Williams opened the module's pressure valve 27 times, pumping in air for a total of two-and-a-half minutes. By then, BEAM had expanded 67 inches—one inch shy of NASA's 68-inch milestone.

Ground controllers decided 67 inches was close enough, and BEAM's onboard air tanks were used to bring the habitat up to full pressurization. 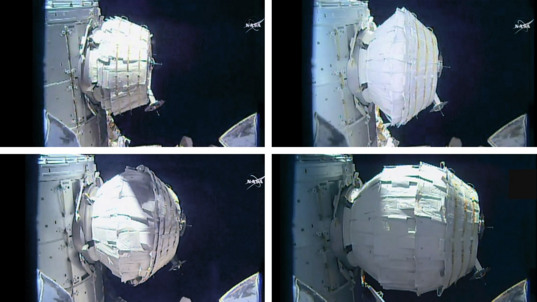 After a seven-hour work session, NASA and Bigelow Aerospace were able to get BEAM expanded to full size on May 28, 2016.

Williams was assisted on the ground once again by astronaut Jessica Meir, who served as CAPCOM in Mission Control Houston. Both spent the day patiently discussing checklists and valve-opening durations. Sometimes, Williams was asked to open the valve for several seconds; other times, it was just a one-second puff.

Why? Firstly, NASA wanted to make sure BEAM expanded gradually, preventing it from suddenly imparting a lot of force back into the station. But secondly, engineers collected a lot of important data during the process. If expandable habitats become a key technology for trips beyond low-Earth orbit, NASA and Bigelow need to fully characterize how the technology works.

A few other questions and comments:

Finally, a big round of applause is owed to the space reporters that stayed glued to NASA TV all day on Memorial Day weekend here in the U.S. Personally, I only checked in a handful of times, and instead followed the action on Twitter. Here are a few of my favorite tweets.

Mashable's Miriam Kramer really wanted to enjoy the outdoors today, but her plans were a little thrown off:

I am particularly grumpy because it's the first summer weekend day in NYC and I want to be biking to the beach right now.

“We’re ready for a big one-second burst.” An exciting day of BEAM expansion on the ISS continues.

Many viewers commented on the popping sounds coming from the module, including GeekWire's Alan Boyle:

But the tweet of the day goes to Miles O'Brien, a veteran science reporter and NASA Advisory Council member:

As a bonus, NASA responded:

@milesobrien For safety, we’re going slowly. Want to ensure expansion doesn't impart any force onto the Station structure itself.