Cumulatively, she has spent more than a year off the planet, serving aboard the International Space Station first in 2002, and again in 2007 and 2008. During the latter mission, a Soyuz malfunction sent her spacecraft back tumbling into the atmosphere with the propulsion module still attached, subjecting the crew to a force eight times that of gravity. She later told CBS News, "I guess the old pilot's saying of 'any landing you can walk away from was a good one' probably applies here." 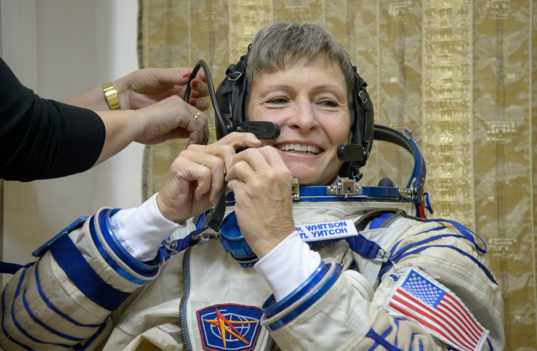 Whitson was the first woman to command the ISS. In 2009, she also became the first—and, to this day, only—woman to head up the astronaut office at NASA's Johnson Space Center, joining a prestigious list that includes Alan Shepard, Deke Slayton and John Young.

Tomorrow afternoon, she will launch on a two-day trip to the International Space Station with Thomas Pesquet and Oleg Novitskiy. At 56, she will become the oldest woman to fly in space, and during the second increment of her stay aboard the ISS, she will take command for the second time—another first for a woman.

But during the run-up to her third mission, Whitson has shifted the focus from herself to her team of trainers and technicians. She calls this group the NASA Village, and has created a Tumblr page featuring their stories.

"We are working to highlight the stories of those people," she said in an interview last year. "What we hope is that by telling those stories, we'll inspire young people to realize there are different types of jobs in spaceflight and exploration."

The people and stories featured on the NASA Village Tumblr account are diverse.

There's Carolina Davis, an astronaut trainer who came to the U.S. from Brazil when she was 15, who simulated a communications failure for Whitson aboard an ISS mockup. Food scientist Dr. Takiyah Sirmons formulates meals for astronauts. An environmental systems specialist named Mari Forrestel works with Whitson to practice fire cleanup procedures.

Dozens more profiles can be found on Whitson's account, including Dr. Hansen, a Russian language teacher, and a team of technicians that help her don a spacesuit for underwater practice sessions.

It's possible Whitson's enthusiasm for storytelling comes from her own unique background.

She was born in rural Iowa, and grew up in a town near the Missouri border that, in 2015, had a population of just 15 people. Her family lived on a farm, and she sold chickens to pay for her pilot's license.

Before she became an astronaut, at least two people tried to dissuade Whitson from that career path, including legendary Iowa scientist James Van Allen, who told her it "wasn't necessarily a good profession."

Later, after Whitson earned a Ph.D. in biochemistry from Rice University, she was offered a post-doctoral fellowship at the Johnson Space Center. But at the time, she had a second job offer on the table: a prestigious gig at the Salk Institute, near San Diego.

When she told the Institute she was opting for a career at NASA, a scientist tried to talk her out of the decision, saying she was making "the biggest mistake of my life," Whitson recalled.

"I'm thinking it worked out pretty good for me anyway," she said.