United Launch Alliance pulled back the curtain on its new launch system today, revealing a mashup of its long-lived Atlas and Delta rockets the company says will increase power, lower costs and broaden mission capabilities.

The name of the new rocket is Vulcan, the winner of a ULA-led online election that drew more than one million votes. Vulcan features a supercharged booster with recoverable engines, and a new upper stage capable of recycling gaseous oxygen and hydrogen to power other subsystems.

"It’s going to take the best parts of Delta and Atlas and combine them with new and advanced technology," said CEO Tory Bruno, speaking at the 31st Space Symposium in Colorado Springs, Colorado. "I came to ULA to transform our company and make space much more accessible than it has ever been before. This new rocket is a key part of that vision," he said. 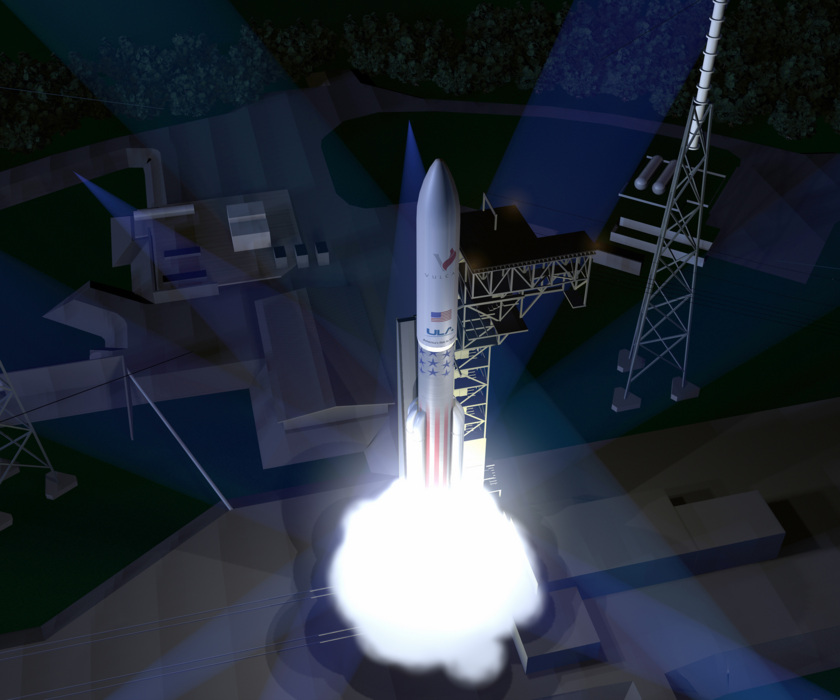 Vulcan’s core stage is powered by a pair of liquefied natural gas-fed Blue Origin BE-4 engines. The move is part of a broader push to end the country's reliance on Russian-built RD-180 engines, which power the Atlas V. Up to six solid rocket boosters can be added to Vulcan, one more than the five available on Atlas flights.

Bruno said Vulcan comes with larger fuel tanks to take advantage of the dual BE-4s, which produce up to 550,000 pounds of thrust each for a total of 1.1 million. That's an improvement over the 930,000 pounds available from a single RD-180, which currently powers the Atlas V.

"This booster is a significant improvement in performance, and it truly is a conquerer of Earth’s gravity well," Bruno said. ULA is also pursuing an Aerojet Rocketdyne-designed backup engine in the event Blue Origin runs into development problems. Vulcan’s first flight is currently scheduled for 2019. 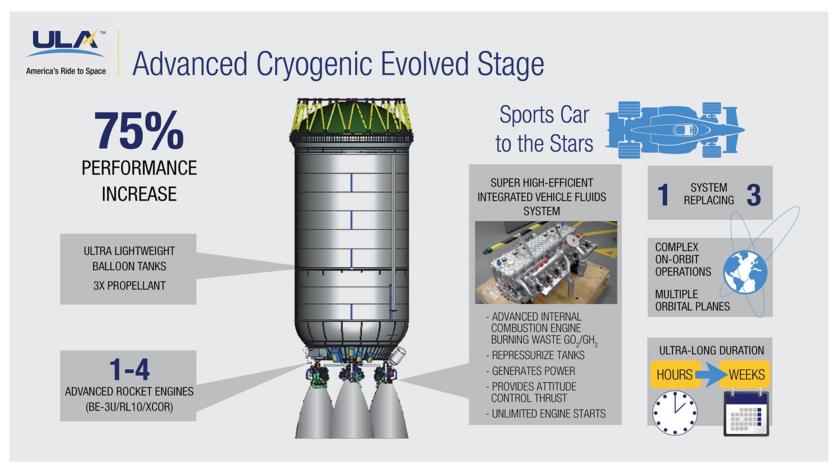 The Vulcan rocket will initially be powered by a standard Centaur upper stage. United Launch Alliance plans to develop a replacement stage that can capture gaseous oxygen and hydrogen waste and use it to power other subsystems.

Vulcan will initially fly with a Centaur upper stage. The move allows ULA to begin transitioning its Atlas V launch manifest to Vulcan without disruption. Eventually, the Centaur will be replaced with ACES, the Advanced Cryogenic Evolved Stage. ACES, which runs on liquid hydrogen and liquid oxygen, uses pressure-stabilized "balloon tanks" to lower weight and increase propellant capacity.

"We call them balloon tanks because they are so thin and so lightweight that on Earth, they cannot even support their own mass," Bruno said. "They would collapse without propellant or pressure in them to hold their shape."

ACES could be powered by anywhere from one to four engines, Bruno said. ULA is currently looking at Aerojet Rocketdyne’s RL-10, Blue Origin’s BE-3, or an XCOR-built engine.

A key part of ACES is the Integrated Vehicle Fluids System, which captures gaseous hydrogen and oxygen that would normally be vented into space. ULA said this will greatly increase the stage’s on-orbit lifetime. "The thing that limits the performance of upper stage systems in launch vehicles is time—time in space," Bruno said.

The captured propellant will be used re-pressurize the fuel tanks, generate electrical power and provide thrust for an attitude control system. ULA is touting the capability for its "Distributed Lift" system, in which an upper stage lofts cargo and propellant to low-Earth orbit, where it awaits the launch of a crewed spacecraft. 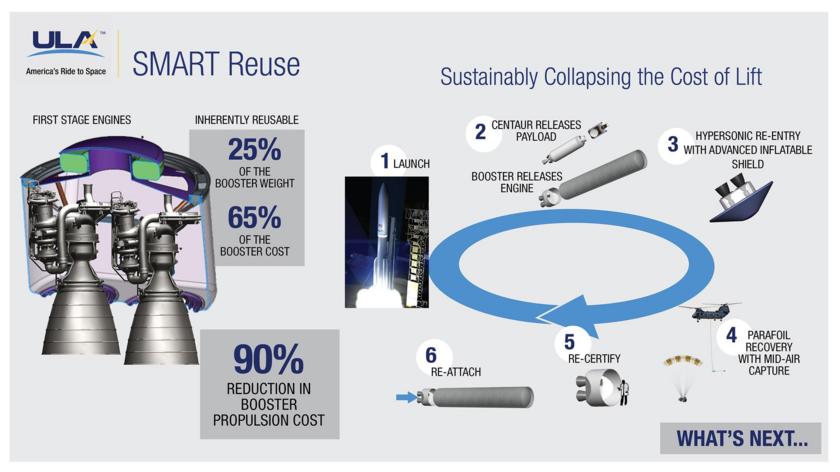 ULA also hopes Vulcan will give the company an entry point into the reusable rocket market. Instead of attempting to recover the rocket's entire first stage booster—à la SpaceX's Falcon 9—ULA is only aiming for the engines.

The system is called SMART, an acronym for Sensible, Modular, Autonomous Return Technology. SMART works like this: After first stage separation, the engine compartment detaches and reenters the atmosphere using an inflatable heat shield. Parachutes deploy, and a helicopter snags the engine section in mid-air. The engines can then be refurbished and flown again.

ULA expects SMART to lower the cost of its boosters by 65 percent. The Vulcan’s baseline configuration comes with a price tag of about $100 million. That’s on par with SpaceX’s $90 million Falcon Heavy.

The payload capacity of Vulcan wasn’t immediately clear, though officials did say that it would be as capable as a Delta IV Heavy, which can haul about 29 metric tons to low-Earth orbit. Falcon Heavy can carry 53 metric tons, according to SpaceX's pricing sheets.

Bruno also said ULA will soon announce changes to the way its customers purchase launch services, using systems dubbed Fast Buy and ReadyLaunch. "Buying a ride to space," he said, "is going to be as simple as buying a car."

@ Kenny, i'd say being caught mid-air means it won't be landing on anything! that's a whole different kind of cool than landing on a barge. there's a lot going on in the rocket to keep our attention levels up! i never realized these rockets were carrying up to 53 tonne payloads.

Great! They feel the heat of competition and try to catch up. If any basic method of reusable can beat propulsive landing on Earth (Flash Gordon style), it would be mid-air capture. This is like the Edison-Westinghouse "war of currents" which moved electricity from the lab to everyones home 125 years ago.

The testing timeline indicates this rocket could launch the 2020 Mars rover and unless the SLS is chosen, it will launch the Europa (Clipper) spacecraft as well.

"i never realized these rockets were carrying up to 53 tonne payloads" They're not. The current Falcon 9v 1.1 can loft ~13 tons into LEO (the v1.0 lifted ~10.5 tons). The quoted 53 tons is referring to the future Falcon Heavy when that flies