Launch postponed due to lightning from an approaching anvil cloud

SpaceX is gearing up for a second attempt to land the spent first stage of a Falcon 9 rocket on a drone ship in the Atlantic Ocean. Liftoff is scheduled for Monday, April 13 at 4:33 p.m. EDT (20:33 UTC) from Cape Canaveral Air Force Station in Florida. The Falcon's primary mission is sending a cargo-laden Dragon spacecraft to the International Space Station. After the first stage finishes its job, the second stage and Dragon will power onward while the first stage comes in for a controlled landing on a thruster-powered spaceport.

The private spaceflight company first tried this in January. During that attempt, the set of deployable grid fins used to steer the rocket ran out of hydraulic fluid. The vehicle came in at a sharp angle, smashing into the drone ship with a fiery crash. In typical SpaceX fashion, footage of the mishap was released on social media via Vine:

SpaceX intended to go for it again in February, during the launch of the Deep Space Climate Observatory, DSCOVR. But high waves and a faulty drone ship thruster scrubbed the attempt. According to CEO Elon Musk, the spent booster still soft-landed on target amidst violent sea swells within 10 meters of its target, before toppling into the waves. Musk also said the drone ship was being upgraded to handle "literally anything." Since then, the ship’s two support vessels have been tracked in and around Port Canaveral and the Port of Jacksonville, according to the ship tracking service MarineTraffic.

The Autonomous Spaceport Drone Ship, as SpaceX calls it, has been christened the "Just Read the Instructions"—and the name is now emblazoned on the landing deck. The moniker is a reference to a ship from the late Iain M. Banks’ novel "The Player of Games." Another drone ship, under construction for launches out of Vandenberg Air Force Base in California, will be dubbed "Of Course I Still Love You," Musk said.

"These friends of yours are ships."
"Yes," Chamlis said. "Both of them."
"What are they called?"
"The Of Course I Still Love You and the Just Read the Instructions."
"They’re not warships?"
"With names like that?" 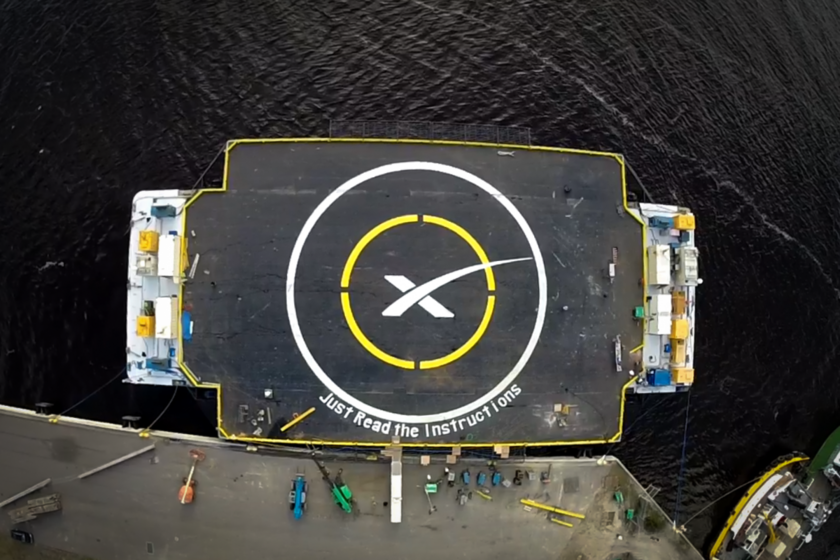 The process for landing the Falcon 9 on Just Read the Instructions works like this: Following first stage separation, thrusters flip the rocket so the engines are pointing in the direction of travel. First, there’s a boostback burn to refine the rocket’s trajectory, causing the rocket to fly through its own exhaust (the space shuttle's risky Return-to-Launch-Site abort scenario relied on a similar maneuver). While the vehicle is still traveling faster than the speed of sound, four grid fins deploy, steering the rocket as it plummets toward the ocean. An entry burn slows the rocket further, and landing legs unfold. A final engine burn settles the Falcon onto Just Read the Instructions.

At least, that's how things are supposed to work. 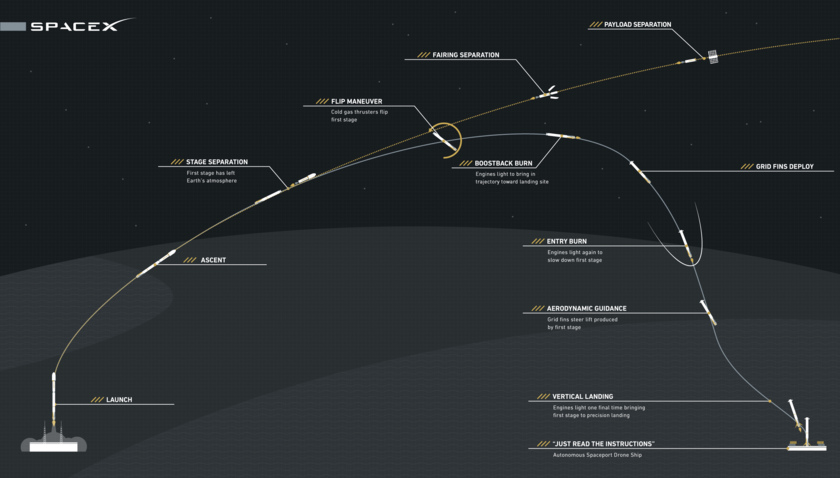 SpaceX will attempt to land the first stage of its Falcon 9 rocket on an automated drone ship in the Atlantic Ocean.

Meanwhile, the Falcon’s second stage, powered by a single cryogenic engine, will boost Dragon into its initial orbit. Assuming an on-time launch, Dragon will arrive at the station Wednesday. At 7:00 a.m. EDT, European Space Agency astronaut Samantha Cristoforetti and NASA's Terry Virts will grapple the spacecraft with the station’s robotic arm. It will be installed at the Earth-facing Harmony port a couple hours later.

Dragon is loaded with about two tons of supplies. The last Dragon to berth with the station carried about 1.8 tons of pressurized cargo, according to NASA ISS Program Manager Mike Suffredini. That makes Monday’s flight the beefiest Dragon haul to date.

The cargo aboard Dragon includes scientific experiments and supplies that will be used to support Expeditions 43 and 44, which last through September. Two crew members, Scott Kelly and Mikhail Kornienko, are currently aboard the station for a one-year mission. Their Soyuz spacecraft will be swapped out in September, following the arrival of cosmonaut Sergey Volkov. Volkov will arrive with ESA astronaut Andreas Mogensen and space tourist Sarah Brightman. Mogensen and Brightman will return to Earth with cosmonaut Gennady Padalka in the initial Kelly-Kornienko Soyuz.