Pretty Picture: A Plethora of Perseids

Did you make it outside this week to see the Perseid meteor shower? The annual display, caused by the Earth's passage through debris from Comet Swift–Tuttle, peaked between August 11 and 13. Judging from some photos popping up around the Internet, a moonless sky helped the Perseids put on a good show.

One such photo comes from Adam Block at the Mount Lemmon Skycenter. While leading public observing of the meteor shower at the Schulman Telescope, Adam snapped a series of 30 second exposures and combined them into a single image. The result shows at least a dozen meteors streaking through the sky over Arizona’s Catalina Mountains.

Adam also created a version of the image with star trails, and posted a timelapse video of the scene. 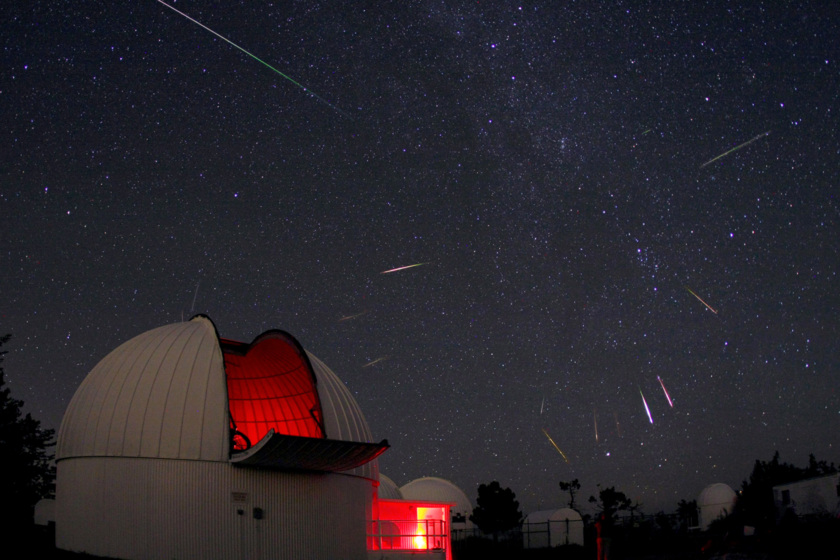 This image combines approximately twelve frames of Perseid meteors glowing as they enter the Earth's atmosphere. The camera was focused on the shower's radiant, the place in the sky from which the meteors appear to originate (in this case, the constellation Perseus). The image was captured at the Mount Lemmon Skycenter on Mt. Lemmon, Ariz.

Observed the Perseids from my backyard, and sent info to the International Metero Organization (IMO). Overall didn't see too many, but did see a couple of fairly bright ones!

No matter where I live or travel to those days are always clear or mostly cloudy skies and 1 hr before sundown, cloudy with nightly thunderstorms. The nights preceding and post are clear. This year is no exception thus I have NEVER seen this shower. Drat!! GRRRR!