Now more than halfway through its journey from protoplanet Vesta to dwarf planet Ceres, Dawn is continuing to use its advanced ion propulsion system to reshape its orbit around the sun. Now that the ship is closer to the uncharted shores ahead than the lands it unveiled astern, we will begin looking at the plans for exploring another alien world. In seven logs from now through August, we will discuss how the veteran adventurer will accomplish its exciting mission at Ceres. By the time it arrives early in 2015 at the largest object between Mars and Jupiter, readers will be ready to share not only in the drama of discovery but also in the thrill of an ambitious undertaking far, far from Earth.

Mission planners separate this deep-space expedition into phases. Following the “launch phase” was the 80-day “checkout phase.” The “interplanetary cruise phase” is the longest. It began on December 17, 2007, and continued to the “Vesta phase," which extended from May 3, 2011, to Sept. 4, 2012. We are back in the interplanetary cruise phase again and will be until the "Ceres phase" begins in 2015. (Other phases may occur simultaneously with those phases, such as the “oh man, this is so cool phase,” the “we should devise a clever name for this phase phase,” and the “lunch phase.”) Because the tasks at Vesta and Ceres are so complex and diverse, they are further divided into sub-phases. The phases at Ceres will be very similar to those at Vesta, even though the two bodies are entirely different.

In this log, we will describe the Ceres "approach phase." The objectives of approach are to get the explorer into orbit and to attain a preliminary look at the mysterious orb, both to satisfy our eagerness for a glimpse of a new and exotic world and to obtain data that will be helpful in refining details of the subsequent in-depth investigations. The phase will start in January 2015 when Dawn is about 400,000 miles (640,000 kilometers) from Ceres. It will conclude in April when the spacecraft has completed the ion thrusting necessary to maneuver into the first orbit from which it will conduct intensive observations, at an altitude of about 8,400 miles (13,500 kilometers). For a reason to be revealed below, that orbit is known by the catchy cognomen RC3.

(Previews for the Vesta approach phase were presented in March 2010 and May 2011, and the accounts of its actual execution are in logs from June, July, and August 2011. Future space historians should note that the differing phase boundaries at Vesta are no more than a matter of semantics. At Vesta, RC3 was described as being part of the approach phase. For Ceres, RC3 is its own distinct phase. The reasons for the difference in terminology are not only unimportant, they aren't even interesting.) 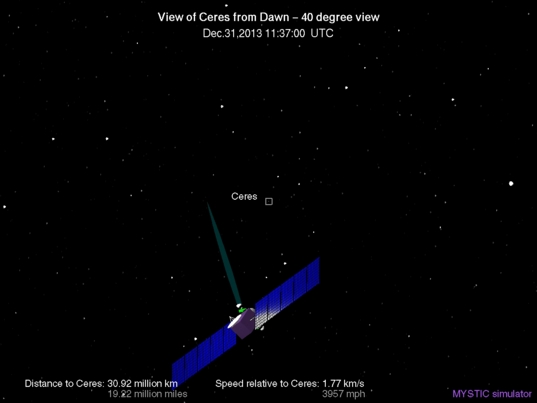 Simulated view of Ceres from Dawn as of December 31, 2013

The tremendous maneuverability provided by Dawn's uniquely capable ion propulsion system means that the exact dates for events in the approach phase likely will change between now and then. So for those of you in 2015 following a link back to this log to see what the approach plan has been, we offer both the reminder that the estimated dates here might shift by a week or so and a welcome as you visit us here in the past. We look forward to meeting you (or even being you) when we arrive in the future.

Most of the approach phase will be devoted to ion thrusting, making the final adjustments to Dawn's orbit around the sun so that Ceres's gravity will gently take hold of the emissary from distant Earth. Next month we will explain more about the unusual nature of the gradual entry into orbit, which will occur on about March 25, 2015.

Starting in early February 2015, Dawn will suspend thrusting occasionally to point its camera at Ceres. The first time will be on Feb. 2, when they are 260,000 miles (420,000 kilometers) apart. To the camera's eye, designed principally for mapping from a close orbit and not for long-range observations, Ceres will appear quite small, only about 24 pixels across. But these pictures of a fuzzy little patch will be invaluable for our celestial navigators. Such "optical navigation" images will show the location of Ceres with respect to background stars, thereby helping to pin down where it and the approaching robot are relative to each other. This provides a powerful enhancement to the navigation, which generally relies on radio signals exchanged between Dawn and Earth. Each of the 10 times Dawn observes Ceres during the approach phase will help navigators refine the probe's course, so they can update the ion thrust profile to pilot the ship smoothly to its intended orbit.

Whenever the spacecraft stops to acquire images with the camera, it also will train the visible and infrared mapping spectrometer on Ceres. These early measurements will be helpful for finalizing the instrument parameters to be used for the extensive observations at closer range in subsequent mission phases.

Dawn obtained images more often during the Vesta approach phase than it will on approach to Ceres, and the reason is simple. It has lost two of its four reaction wheels, devices used to help turn or stabilize the craft in the zero-gravity, frictionless conditions of spaceflight. (In full disclosure, the units aren't actually lost. We know precisely where they are. But given that they stopped functioning, they might as well be elsewhere in the universe; they don't do Dawn any good.) Dawn's hominid colleagues at JPL, along with excellent support from Orbital Sciences Corporation, have applied their remarkable creativity, tenacity, and technical acumen to devise a plan that should allow all the original objectives of exploring Ceres to be met regardless of the health of the wheels. One of the many methods that contributed to this surprising resilience was a substantial reduction in the number of turns during all remaining phases of the mission, thus conserving the precious hydrazine propellant used by the small jets of the reaction control system.

When Dawn next peers at Ceres, nine days after the first time, it will be around 180,000 miles (290,000 kilometers) away, and the pictures will be marginally better than the sharpest views ever captured by the Hubble Space Telescope. By the third optical navigation session, on Feb. 21, Ceres will show noticeably more detail.

At the end of February, Dawn will take images and spectra throughout a complete Ceres rotation of just over nine hours, or one Cerean day. During that period, while about 100,000 miles (160,000 kilometers) distant, Dawn's position will not change significantly, so it will be almost as if the spacecraft hovers in place as the dwarf planet pirouettes beneath its watchful eye. Dawn will see most of the surface with a resolution twice as good as what has been achieved with Hubble. (At that point in the curving approach trajectory, the probe will be south of Ceres's equator, so it will not be able to see the high northern latitudes.) This first "rotation characterization," or RC1, not only provides the first (near-complete) look at the surface, but it may also suggest to insightful readers what will occur during the RC3 orbit phase.

There will be six more imaging sessions before the end of the approach phase, with Ceres growing larger in the camera's view each time. When the second complete rotation characterization, RC2, is conducted on March 16, the resolution will be four times better than Hubble's pictures. The last photos, to be collected on March 24, will reveal features seven times smaller than could be discerned with the powerful space observatory.

The approach imaging sessions will be used to accomplish even more than navigating, providing initial characterizations of the mysterious world, and whetting our appetites for more. Six of the opportunities also will include searches for moons of Ceres. Astronomers have not found moons of this dwarf planet in previous attempts, but Dawn's unique vantage point would allow it to discover smaller ones than would have been detectable in previous attempts.

When the approach phase ends, Dawn will be circling its new home, held in orbit by the massive body's gravitational grip and ready to begin more detailed studies. By then, however, the pictures and other data it will have returned will already have taught Earthlings a great deal about that enigmatic place. Ceres has been observed from Earth for more than two centuries, having first been spotted on January 1, 1801, but it has never appeared as much more than an indistinct blob amidst the stars. Soon a probe dispatched by the insatiably curious creatures on that faraway planet will take up residence there to uncover some of the secrets it has held since the dawn of the solar system. We don't have long to wait!

HI - In case you have not heard; This may be a major discovery of importance pertaining to the approach & planning phase to Ceres. This discovery was just publicly announced via ESA. Please see: http://www.esa.int/Our_Activities/Space_Science/Herschel/Herschel_discovers_water_vapour_around_dwarf_planet_Ceres

The two lost reaction wheels are scary. If they lose another one, Ceres is lost. Pallas was lost when the second one went. the geysers on Ceres are the most important thing now.

Messy, as I've written in several recent Dawn Journals (see November 2013 as an example), we do not need the reaction wheels in order to complete our Ceres exploration. The ingenious team has overcome this daunting challenge. Pallas was never part of Dawn's itinerary. I know there were reports that suggested it was, but they were erroneous. We have known about the water vapor for quite some time. It is exciting and interesting, and I eagerly await Dawn's findings. But it's important to understand that we have many objectives at the dwarf planet. The "geysers" (note that there are other explanations for the water vapor) are not considered to be more important than many other observations. But it isn't a competition. We will discover as much with Dawn as we can! We already have a very carefully choreographed plan for studying Ceres, which I will be describing in my Dawn Journals this year, culminating in my December 2014 preview of what makes Ceres so intriguing. Marc