Treating intercalary days just as it does most other days in its interplanetary cruise, today Dawn continues patiently and ever-so-gently reshaping its orbit around the Sun with the delicate yet persistent push from its ion propulsion system. The beam of xenon applies a force less than eight millionths of what the spacecraft would feel from gravity at the surface of Earth. The effect of such a bone-rattling eight micro-gee acceleration is very modest indeed, as discussed in a log written while Dawn was still on that now-remote planet.

All of the thrusting so far in the mission has changed the spacecraft's speed by 470 meters per second (1100 miles per hour), less than 15% of which was from the tests during the initial checkout phase. This is sizable for a spacecraft, but it is only a small fraction of what will be needed on this journey to gain insight into the dawn of the solar system. During its 10 weeks of accumulated thrust time, the spacecraft has expended about 19 kilograms (43 pounds) or less than five percent, of its xenon propellant. Years of thrusting will be required to reach its elusive scientific targets, asteroid Vesta and dwarf planet Ceres.

Even as Dawn slowly modifies its orbit, the path it takes is already quite different from Earth's. The Delta rocket, which flew with the spacecraft only for about an hour in September, gave the probe enough energy to break the bond of Earth's gravity, so it travels independently through the solar system, unlike the Moon and satellites humans have launched into Earth orbit. As Dawn and Earth go their separate ways, today they are moving apart even faster than described in the last log. During the time it takes Earth to rotate once (about 24 hours, for those readers not familiar with this planet's idiosyncrasies), the distance between it and the spacecraft increases by more than 1.4 million kilometers (nearly 900 thousand miles).

The probe suspends ion thrusting each week to turn from the thrust orientation to bring Earth into the sights of its main antenna. The spacecraft transmits information it has accumulated on the operation of all subsystems and welcomes any new instructions from mission control.

During the communications session on February 15, engineers radioed new data to be used following a reboot of the main computer. These parameters will be applied by the thermal control system to manage the temperatures of some components in the reaction control system (the system of small conventional thrusters that helps the craft orient itself in the zero-gravity of spaceflight). As Dawn journeys farther from the Sun, the ship feels less of the warming rays, so it needs to rely more on its own heaters, and the new values stored in computer memory help accomplish that. In a delightful demonstration of flamboyant irreverence, based solely on this minor change, the software was renamed from 7.0.2 to 7.0.3. 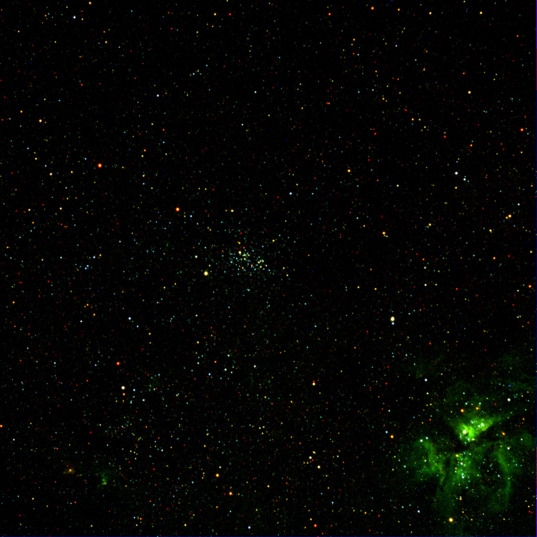 This view in the southern constellation Carina was acquired on December 13, 2007 as part of characterization tests of Dawn's Framing Camera. The false-color view is a composite of images at 430 nm (violet), 650 nm (red), and 980 nm (infrared). The cluster of stars in the center is NGC 3532, and the nebula in the lower right is the Eta Carina Nebula (NGC 3372).

Although the weekly routine is quite adequate to keep the spacecraft content on its interplanetary voyage, the flight plan included a special activity on February 21 and 22. The backup science camera was guided through a set of tests to demonstrate its functions and capabilities. The instrument received its initial checkout in December, showing it to be healthy, but this month's tests were more demanding. The steps were nearly identical to those executed with the primary science camera, with the only differences being some of the objects that were observed. As the spacecraft has progressed in its orbit, a different region of the celestial sphere was too close to the Sun to be viewed safely by the camera. Among the targets in both sets of tests were the Carina Nebula and the star Vega. As expected, they created the same beautiful views with the backup camera as they did with the primary camera. The results prove that both devices function very well and that the new project in Carina designed to dramatically alter its appearance for observers throughout the Milky Way (believed by many to be an ostentatious attempt to outdo Earth's famed artist Christo) did not achieve its stated ambition. Following the successful completion of the camera tests, the spacecraft resumed thrusting.

Dawn is 104 million kilometers (65 million miles) from Earth, or more than 270 times as far as the moon and 70% as far as the Sun. Radio signals, traveling at the universal limit of the speed of light, take almost 12 minutes to make the round trip.