Above my home in downtown Chicago, the sky is afflicted with a sickly orange glow. On an average night, climbing the stairs to the rooftop deck over my garage might only yield a view of a dozen stars, and a couple of those are usually planets. Sadly, the middle of a densely populated metropolitan area isn't the ideal setting for astrophotography.

That doesn't mean you can't do it anyway. In fact, as I've found out in the past few months, it can be a lot of fun, and with a little patience I've been able to capture some modest pictures of the cosmos.

I am, without a doubt, not a professional photographer. I purchased my first digital single-lens reflex camera -- a Nikon D5100 -- late last year. Almost immediately, I began turning it towards the night sky. There are a lot of Internet guides on astrophotography, but I found that most assume you're in a setting more ideal than mine, which resulted in most of my early attempts being washed out by streetlights and skyglow. 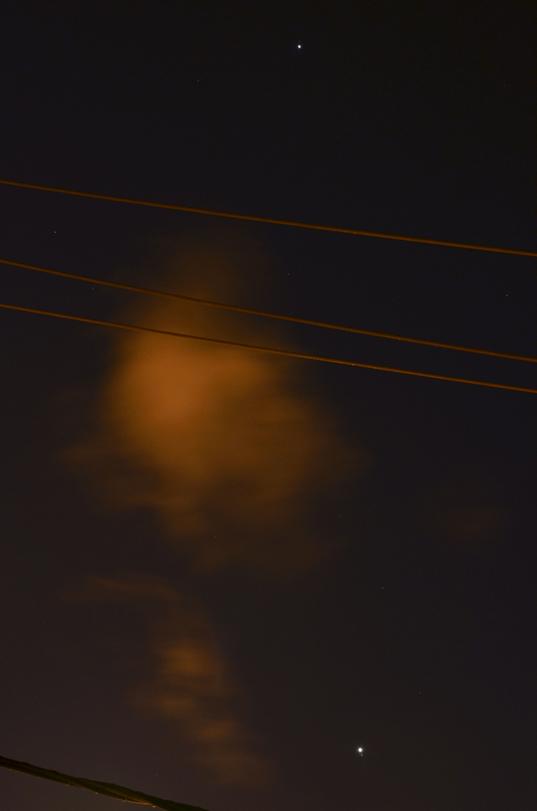 Venus (bottom) and Jupiter share a spot of sky divided by a set of power lines and a passing cloud, which reflects the light of downtown Chicago on February 18, 2012. Settings: f/11, ISO 250, 8".

My setup doesn't include a telescope or even a zoom lens. I use a 50mm f/1.8 lens -- the only one I own at this point -- and a SunPak 2001UT tripod. For processing, I use Adobe Photoshop, but rarely do anything fancier than adjusting colors, brightness and contrast, so a free alternative like The Gimp should work just as well.

The first thing I learned about urban astrophotography is that I couldn't let a lot of light into the camera without getting severely overexposed pictures, due to the brightness of the light-polluted sky. The camera's f-stop controls the amount of light that passes through the aperture; the lower the number, the more light that enters. Your f-stop setting must be measured proportionally against how long you want to leave the shutter open; a higher f-stop will allow you to take longer exposures. I've found my ideal setting ranges anywhere from f/4 for short-exposure pictures (1 second) to f/16 for long-exposures (20 seconds). 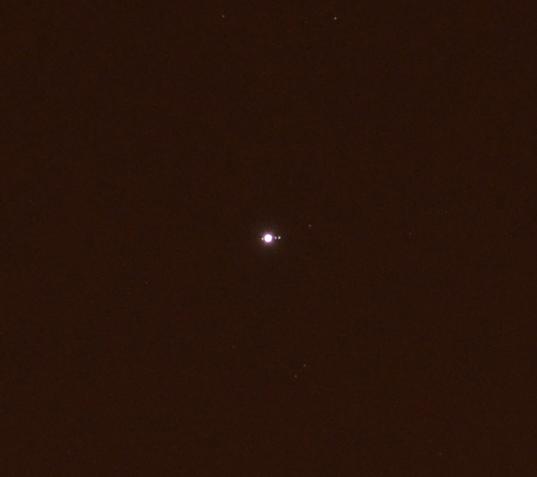 The preceding picture of Jupiter was one of my most exciting pictures to date, because it wasn't until I zoomed in during processing that I realized I could see three Galilean moons! To confirm I wasn't looking at an optical illusion, I fired open Stellarium to verify the moons were positioned in the same way when the picture was shot, and sure enough, they were.

When deciding how long to leave the shutter open, remember that unless you're intentionally trying to capture star trails, the rotation of the Earth forces your exposure time to be brief. There is a simple equation you can use for your lens to determine how long it will take noticeable star trails to form:

Your size and crop factor should be listed on your lens. For me, this equation works out to 500 / (1.8 * 50) = 5.6 seconds, which means I can only keep my shutter open for 5 seconds before things start to blur. 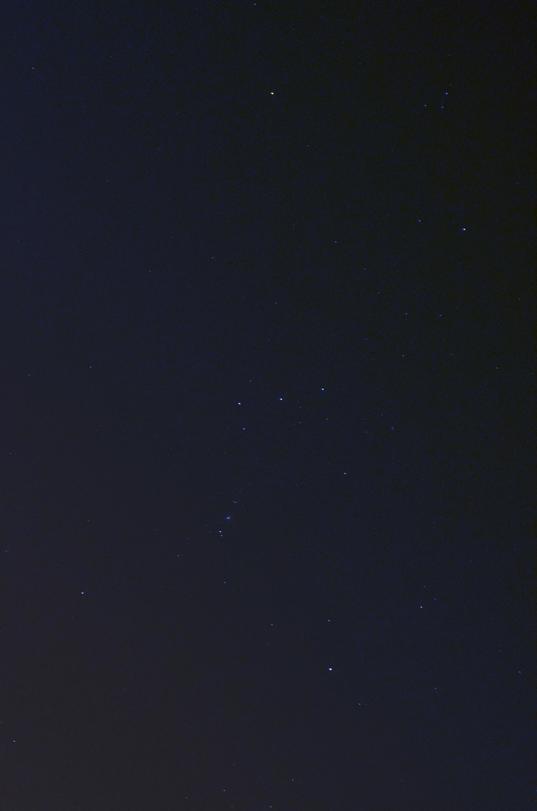 Orion is a fun object to photograph. In an urban setting, it can be difficult to make out all of the individual stars with the naked eye, but once you open an image of the constellation in Photoshop and start playing with the colors and brightness, more stars begin to pop out, and the redness of Betelgeuse becomes more apparent. Additionally, you can zoom in on Orion's sword, and compare your view with Stellarium to see how many individual stars in the Orion Nebula you are able to resolve. It's a fun way to do some rudimentary observational science!

There's one more setting on your camera to consider: the ISO, or sensitivity, of the image sensor. The higher you set your ISO, the more sensitive your camera becomes to incoming light. In areas with a lot of skyglow, avoid high numbers or you'll end up with a grainy sky. I've found that a setting of 200 to 600 works well for me.

Some other noteworthy objects I've tried to photograph with moderate success are the Moon (use short exposures with a high f-stop or you'll end up with a featureless white blob), Mars (it will show up magenta in processing if you darken the surrounding skyglow) and the occasional passing plane (my neighborhood sits under a flight path for Chicago O'Hare International Airport; luckily, inbound planes are high enough to keep the noise levels fairly low).

There's another target that's challenging, but definitely worth the effort: the International Space Station. So far, I've only captured the station using long exposures, but you could also try video and time-lapse. To capture the station in a long exposure, disregard the star trail equation and set your shutter to stay open for 10-20 seconds. You can eventually try longer exposures, but I recommend starting small so you can get multiple attempts during a single pass. 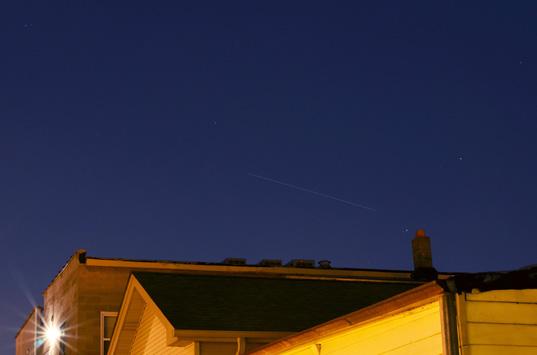 Did you notice that the beginning of my ISS trail has a bit of wobble to it? That's because I don't own a remote shutter release, and the act of pressing the button shook the camera. If you don't want to shell out for a remote shutter, you can always use your camera's self-timer, but that will waste precious time if you're trying to capture a moving object like the space station. Personally, I'm planning to purchasing one for future attempts.

To find out when the ISS will be passing over your location, I recommend following @twisst on Twitter to get personalized alerts. Twisst provides exact times, directions and brightness estimates.

In closing, I want to stress that the only correct approach to astrophotography is the one that works for you! Living under an urban sky can be disheartening, but with a little patience and experimentation, you can still capture some satisfying images. I encourage you to give it a try, and please share your tips and experiences!