With the Trump administration about to mark its 50th day in office, NASA, for now, continues working on its Obama-era plan to send humans to Mars.

The centerpiece of that plan includes the "proving ground" in cis-lunar space. After years of behind-the-scenes negotiations, NASA and its International Space Station partners are close to finalizing the architecture of a proposed human outpost in the vicinity of the Moon as early as June or July of this year, according to industry sources familiar with the project. 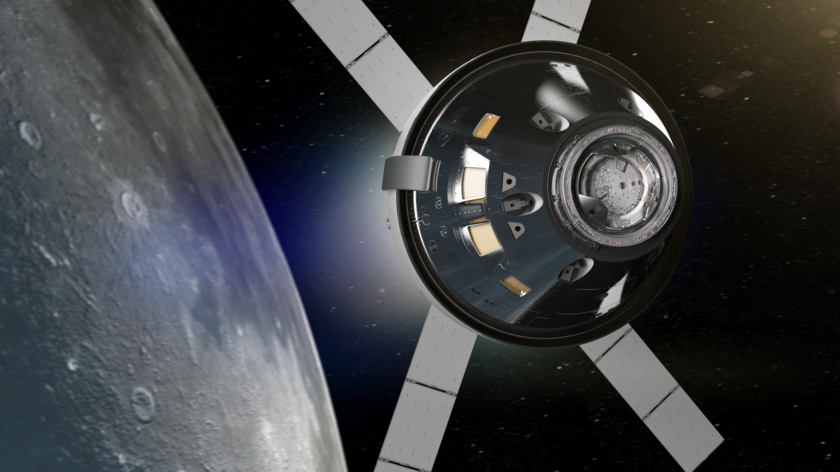 Orion at the moon

Last month, experts from five space agencies held a behind-the-scenes meeting in Tsukuba, Japan, the home of the Japan Aerospace Exploration Agency. In the following few months, the designs for the largest international undertaking in human spaceflight since the ISS will be reviewed by space agencies. Engineers might also begin constructing the first full-scale prototype of the near-lunar habitat here on Earth to assess the ability of proposed modules to support the crew.

The ISS partners also made a crucial decision in Tsukuba to assemble and operate the proposed cis-lunar station in a so-called Near-Rectilinear Halo Orbit, or NRHO. This giant, egg-shaped loop extends 70,000 kilometers from the Moon at its farthest point and comes as close as 1,500 kilometers at the nearest. An NHRO would enable the station to save propellant for orbital corrections and avoids the blocking of sunlight by the Moon from reaching the station’s solar panels, while always keeping the spacecraft within a line of sight to ground controllers on Earth.

This would also allow NASA’s Orion spacecraft to easily approach—and, in the event of an emergency, rapidly depart—the station. However, vehicles bound for the lunar surface from the NRHO will be taxed in terms of mass and propellant, when compared to orbits closer to the Moon. 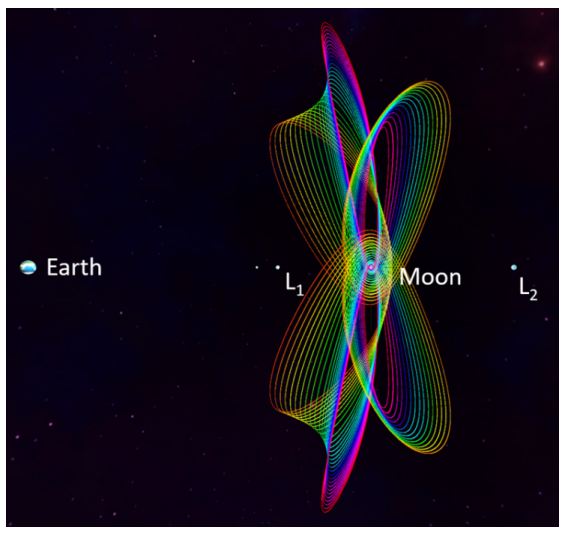 An NHRO would enable a cislunar space station to save propellant for orbital corrections and avoid the blocking of sunlight by the Moon from reaching the station’s solar panels, while always keeping the spacecraft within a line of sight to ground controllers on Earth.

It would take the station a week to make each revolution around the Moon in such an orbit. Although the NRHO is a primary location for the base, the outpost would still be able to maneuver to other destinations in the future.

The partners are also said to be on track to finalize their common technical standards for the station as early as April. The critical agreement will make sure that all the hardware and technology needed in the program, such as rendezvous and docking systems, life support, communications, power supply and thermal control gear will work seamlessly and safely for years to come.

According to the latest design, the station includes a pair of habitation modules built by Europe and Japan, a U.S.-built power and propulsion module, a Russian airlock module and the 8.5-meter Canadian robotic arm. Based on the experience obtained during the ISS program, the life-support system of the cis-lunar station will eventually feature a truly "closed-loop" technology, essentially recycling all its resources, such as waste water and oxygen.

Engineers are also considering adding a 360-degree "glass" deck on the station with multiple windows, enabling future astronauts to enjoy lunar vistas, much like today’s ISS crews observe the Earth through the panoramic windows of the cupola module. Depending on the mission, the new-generation cupola could be bolted to different docking ports of the station.

NASA’s Orion spacecraft, launching on a giant SLS rocket, would conduct annual trips to the station, delivering crews and most of the outpost’s components. In the latest move agreed to in Tsukuba, Russia will also evaluate the possibility of using its new-generation Angara-5 rocket to carry its airlock module to the station.

According to current plans, the cis-lunar outpost would be under construction and operation for much of the 2020s. Still, this scenario is considered only as the first step in enabling human missions further into space, such as expeditions to asteroids, the moons of Mars and ultimately the Martian surface during the 2030s.

Despite big progress on the engineering front, the project faces an "elephant in the room" in terms of political support. The new White House administration has yet to lay out its vision for NASA’s human spaceflight program. International partners are also not on the same page in terms of the project’s ultimate goal. Russia, for instance, wants to focus the station on the exploration of the Moon rather than its use as a test bed for a mission to Mars as insisted by NASA. During the latest meeting in Tsukuba, Russian officials reportedly proposed an alternative design of the outpost aimed at the Moon. Roskosmos promised to analyze whether keeping the station in a low lunar orbit would be feasible.

To address potential disagreements on where to go with the cis-lunar habitat, NASA promised to study how to adapt the outpost for both tasks. One solution would be keeping some of the infrastructure near the Moon permanently, while other pieces could later be detached in order to go to Mars or other deep-space destinations.

Engineers are also working to ensure an open architecture design for the new outpost, where new modules or components could be "plugged-in" into the station, in case new international or commercial partners join the project.

In preparation for possible political and public relations battles ahead, NASA proposed to name the cis-lunar station a spaceport, while the future Mars-bound part of the project would be dubbed a spaceship. Interestingly, the spaceport concept in lunar orbit appears in early Russian studies of the project circa 2005.

Although all the key components of the cis-lunar station are to be delivered by NASA’s giant SLS rocket, there is an open question on cargo missions, which will be needed to support the crews during progressively longer missions. Although no decision on cargo delivery has been made yet, it is possible to speculate the agencies might want to outsource logistical operations to industrial contractors, which would provide their own launch vehicles and spacecraft. In that scenario, U.S. companies like SpaceX and Orbital ATK could have big advantages in any bidding processes, thanks to their experience in delivering cargo to the ISS on the Dragon and the Cygnus cargo ships, respectively.

Just two weeks after the meeting in Tsukuba, SpaceX announced its intention to send a pair of tourists on a mission around the Moon onboard its Crew Dragon spacecraft, launched by the Falcon Heavy rocket. Although the company’s deadline for the cis-lunar mission at the end of 2018 is not considered realistic, the rocket and spacecraft could mature in time to support a cis-lunar outpost. The company’s Falcon Heavy can deliver more than half of the payload carried by NASA’s SLS rocket.

Assembly of the station is currently proposed to begin with the third flight of Orion around 2023. The first logistics flight for the cis-lunar outpost might be required between 2024 and 2025, sources said.

For more historic and technical background on the cis-lunar project, visit Russianspaceweb.com.

Beyond the Earth's magnetosphere, astronauts would be exposed to cell killing heavy ions (heavy nuclei). Shielding against heavy ions requires approximately 20gm of mass per centimeter square. So at least 20 centimeters of water would be required to protect astronauts. That should also be enough shielding to protect astronautas from major solar events. Astronauts would still be exposed to about 30 Rem per year, but that still below NASA's 50 Rem per year limit, but well above the 5 Rem per year limit for radiation workers on Earth. Marcel

The only rational use for a space station in Lunar orbit is as a temporarily crewed transit point between Earth and the Moon's surface. Like a permanent (reusable) Apollo Command Module in Lunar orbit. Would allow for use of minimal landing/ascent vehicles while the Earth/Moon shuttle doesn't need to land. And for increased safety as an abort-to-point. But then I wonder if the proposed orbit is optimal for that.

EML1 is the most logical location for a DSH, IMO.

Orbiting astronaut around the Moon isn't worth the risk. The risk, in ALL 18 cases of astronaut casualties, consists of blowing up when leaving or entering Earth's atmosphere. Landing on and launching from the Moon is safer because it lacks atmosphere. The investigation of the last Shuttle disaster concluded that the mission's objectives weren't worth the risk to life. Putting astronauts' lives at risk requires a Lunar landing and field geology there in order to be motivated. If a couple of astronauts paid SpaceX for rounding the Moon for their own reasons, that is just fine. It's obviously worth it for them.

Adding to Marcel's water shielding idea, fuel cells can add to the water supply for that. Setting aside an exclusive fuel cell network by-product (water) for shielding use only would ensure a steady supply for shielding. When the supply becomes excessive then the shielding network can allow the excess to be passed to station consumables. Start/Stop fuel cells will also be a major benefit as compared to the first spacecraft fuel cells, Gemini days for the U.S. .

Thanks for the numbers Marcel - I didn't realize the shield could be that thin. So a 20cm shield of water around something the size of an S-IVB (Skylab - I'm only using Skylab as an example because I don't know the proposed dimensions of the station) would be 90 tonnes which is almost the mass of fuel carried in a fully fueled S-IVB. And I think 90 tonnes is more than the Block 1 SLS can deliver to LEO (nevermind lunar orbit). I wonder how many launches this will take and whether they will do the bulk of station assembly in LEO or in lunar orbit.

20 cm has been around as a figure for what is required to block a Solar eruption. Earthy's atmosphere corresponds to about 10 meters of water 1,000 cm. That's the environment where we have evolved.

International "cooperation" between governments is way way way too expensive and high risk. It is very much cheaper to do it within one nation or one company. Involving even more parasitic special interests who each have corrupted their own politicians and bureaucrats in each other country too, creates an unmanageable mess of looting, delays, sabotages, extortions and random cancellation of key components of the project. See Dart/Aim and Juice and ExoMars and on and on of the graveyard of wasted resources of US/ESA collaborations that were sabotaged. International cooperation can only work when it is non-governmental. Between companies and between scientists. When a government decides to spend a billion tax monies on X, all the international psychopathic parasites immediately attack it in order to loot it to death. And they always do, space missions are only successful when they are done nationally or by one single company. That is the only possible way to organize success, beyond arranging an academic discussion.

So, the biggest mistake in ISS architecture was relying on single, ultra expensive launch vehicle as way of constructing it. Instead of relying on the worldwide stable of perfectly capable expendable launch vehicles, most pieces were designed to be flown on STS only. Glad that we learned the operational fragility lesson on this. This proposed outpost would only be built by ... SLS. Instead of relying on a distributed launch architecture where proven launch vehicles like Atlas, Ariane, Proton, H-II, Falcon 9 and future vehicles like Angara, Vulcan could all do their part of lifting, lets just paint everything in the SLS corner from the get go. Politics trumps common sense ?