An international outpost near the Moon gets closer to reality

International Space Station (ISS) project partners are inching ever closer toward an agreement to begin the development of a new human outpost in the vicinity of the Moon. If successful, the cis-lunar space station (a space station in the vicinity of the Moon) will be the largest international space project to date, influencing the direction of human space flight for decades to come.

During a closed-door meeting in Houston last week, NASA officials met their colleagues from Europe, Russia, Japan, and Canada to discuss the latest changes to the cis-lunar space station concept. The team, known as the International Spacecraft Working Group, ISCWG, is charged with brainstorming all the technical details necessary to start the development of the new deep-space exploration program after the retirement of the ISS, now expected in mid 2020s. The team's recommendations are not binding, but will likely form the reference architecture for any future project.

The current vision involves a multi-modular outpost, essentially a smaller version of the ISS, but in the vicinity of the Moon instead of in Earth’s orbit. The outpost will also use more advanced technologies than those available on the ISS, such as closed-loop life-support systems and electric propulsion. These could enable the outpost to become the first interplanetary crewed spacecraft heading into deep space to explore asteroids or even reach the vicinity of Mars in the 2030s. To reflect that ultimate goal, NASA identified the facility as a “proving ground” for Mars exploration. 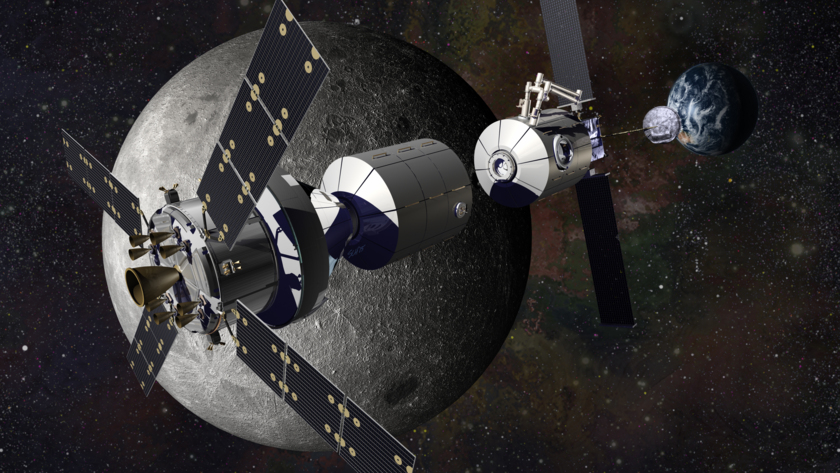 Lockheed Martin concept for a modular cis-lunar base

The cis-lunar outpost would be built primarily out of modular components riding NASA’s giant SLS rocket as hitchhikers along with the Orion spacecraft. Following its insertion into trans-lunar trajectory, the Orion crew capsule would separate from the booster stage, turn around and dock with the add-on module still attached to the booster stage, very much like Apollo crews did to extract their lunar modules in the 1960s.

However, instead of landing on the lunar surface, each Orion mission would bring an add-on module to the vicinity of the Moon, where they would all be bolted together to form a long-term habitat. Other countries could launch their own components, as with the ISS program.

According to the latest architecture worked out by the partners, the construction of the outpost would start with a 8.5-ton power and propulsion module launched during the Orion’s third Exploration Mission, EM-3.

Recently, the European Space Agency agreed to provide an additional cutting-edge electric engine unit, which would help to propel the first module. Both American and European electric thrusters would be fed by xenon gas. The same module would also provide power supply and communications for the entire outpost. Last but not least, Canada would build a robotic arm, which would be strapped to the propulsion module and later used on the outpost.

Once the power and propulsion capabilities are in place, a pair of habitation modules would be delivered and attached to it in two subsequent Orion missions, EM-4 and EM-5. Previous incarnations of the plans envisioned these components being built in Russia or Europe, but the Japanese space agency has recently offered to contribute its own habitat. The Japanese habitat would feature a closed-loop life-support system, greatly reducing dependency of the outpost on deliveries of water and oxygen from Earth.

Also this year, the Russian space agency, Roscosmos, agreed to consider contributing an airlock module for the outpost, which would be used for spacewalks. During its ride to the lunar vicinity with the Orion spacecraft, the airlock would be packed full of supplies for the future station, bringing its launch mass to around nine tons. Alternatively, Roscosmos could launch the airlock module independently, using its new-generation Angara-5 rocket, upgraded with a high-power hydrogen space tug.

Theoretically, Russia could also support the international program with its next-generation transport spacecraft dubbed Federatsiya (Federation), which is expected to be the only alternative to the Orion in bringing crews to the outpost. As of today, Roscosmos promises the first crewed flight of the new ship in the low Earth’s orbit in 2024, followed by the first mission to lunar orbit in 2027. Although SpaceX and other private providers are likely interested in providing transportation services to a cis-lunar program, only the NASA Orion and Roscosmos CTV spacecraft appear on the official schedule.

The cis-lunar space station could also be complemented by a 10-ton robotic vehicle developed jointly by ESA, Japan, and Canada. It could be equipped with a rover and an ascent stage for returning soil samples from the surface of the Moon. The robotic vehicle could be launched independently on a rocket provided by one of the partner agencies in 2026, at the earliest. Once the probe lands on the Moon, a crew onboard the cis-lunar outpost could remotely operate the soil-sampling rover on the surface and then launch the ascent stage for the subsequent transfer of samples back to Earth.

In the course of its assembly and operation, the cis-lunar outpost could be resupplied by cargo vehicles launched on a variety of rockets.

During the second phase of assembly, at the end of the 2020s, the outpost would be complemented with NASA’s newest habitation and propulsion module launched on a dedicated SLS rocket. This latest addition could make it possible for the outpost to embark on the first mission into deep space.

Where do they stand?

Sources familiar with the matter say that after years of negotiations, the international team made enough progress to reach an agreement in the near future, which would see ISS partners all contributing components and technologies for the common goal. The initial phase of development of the cis-lunar outpost, known as Phase A, could then go ahead in 2017 or 2018.

During the Houston meeting this month, it was decided to postpone the beginning of the habitat construction by around a year until 2023. Under this scenario, the first phase of the outpost would be completed in 2028. Of course, if history of the ISS is any guide, many delays are very likely.

There are several political developments coming even this year, which can throw a monkey wrench into the carefully constructed schedule. Obviously, the first being the US presidential elections, which are notorious for changing the course of the American space program. Next, comes a meeting in December of the European ministers drawing the ESA’s budget for the next several years. And another wild card in the project is the Russian involvement, which remains uncertain due to an array of political, financial and technical problems.

Not surprisingly, partners scheduled the next meeting on the cis-lunar outpost at the beginning of next year. Although 2017 is just two months away, it could very well be in another era for space exploration…

The international community is moving forward at a painful pace, but at least they appear to be moving again. I suppose SpaceX can earn some money with supply flights for this cis-lunar outpost. If they use the ITS for cargo they can get a lot of stuff there (350 metric tons) in one go.

I am glad to see my home country of Canada is represented as a likely contributor to this possible international cis-lunar space station. However shouldn't a possible new international space station or base also include the significant space-faring nations China and India?

This seems like the reasonable next step after ISS. If there's going to be any return to the Moon, it will probably be an international one. With any luck we'll see a cis-lunar station acting as a waypoint for expeditions to firstly the Moon and perhaps Mars. I'd put more focus on Mars but NASA should at least keep a supporting role if its partners have the Moon on their minds.

As exciting as something like this sounds, what I don't see in the article is the purpose of such a mission. Is it just to gain experience operating in "deep(er)" space? Or are there some other science objectives? Would we see this as something lasting 25-ish years of continuous manning, which is about the same expected lifespan of the ISS?

Out of curiosity, does "cis-lunar" in this case mean it will be in lunar orbit, or maybe at one of the Lagrange points (L1, L2, L4, or L5)? I can see advantages and disadvantages to any of the options above. Or are they being intentionally vague to keep their options open?

Please please please lets learn the operational lessons from ISS - No single launch vehicle on the critical path - No manned assembly steps - Modularity needs to go further, so elements can be swapped and upgraded over time - It needs to be able to act as a staging post, not just as a laboratory. Anyway, who is funding this and which international agreement or policy document is backing it ?

Judging from the new Blog Post: "Long March 5 launch blasts China into age of space station and deep space exploration", the developments foreseen in the Blog Post above may be rendered slow-footed and irrelevant by China. If China pulls off an "orbiter, lander and rover will head for Mars in summer 2020", it will mean they have virtually caught up with the US, and may well then be ahead of Europe and Russia. Hopefully (I think one can say presumably) they will head extremely rapidly for Mars life detection and for sample return. Even more hopefully, they will head equally rapidly for life detection on Europa and Enceladus, missions to Ceres etc, all to demonstrate supremacy over the US (and everyone else)! These would be devastating blows to US prestige. But the fact is that the prospect of such an outcome might trigger a new "space race', and a golden age of planetary exploration. So I have to say I'm hoping for it.

Federation maiden manned flight planned for 2023, and Roskosmos also confirmed that man-rated Angara A5P would be ready to fly from Vostochny (upon completion of launchpad) from 2021.Not sure about cryogenic space tug KVTK (aka RUSSIAN Centaur) that slipped from 2021 to 2025 :(

Very sad, if true. Hard to imagine a bigger detour or roadblock on the way to Mars than building a space station around the Amon.