This article originally appeared on the Women in Planetary Science blog and is reposted here with permission.

The photo below was taken during the July 2016 meeting of the Science Team for the Europa Multiple Flyby mission. All of the women at the meeting (most of whom are members of the science team) wanted to celebrate the accomplishments of women scientists by taking this photo. It was shot after Dr. Margaret Kivelson was honored by the Project with the Monolith award. During her speech, Margie discussed the challenges she’d faced over her more than 50 years as a scientist, many of those due to being one of a very small number of women scientists. For more about her talk, see here. 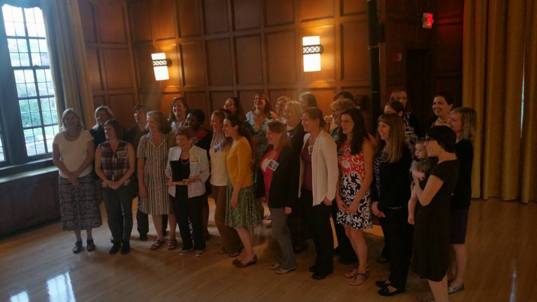 How far have we come and how far do we still need to go to welcome women into planetary science, and, particularly, spacecraft missions? For the 2015 DPS meeting, together with a great group of volunteers, I found lists of names of the team members for 22 NASA planetary science missions over a period of 41 years. We considered only original team scientists (not engineers, members of project management, nor students or postdocs) from US institutions (since investigators from foreign institutions are generally not funded by NASA). We determined the year each team was selected and the gender presentation of each team member. For more recent missions, generally someone on our team knew the investigator personally, so it was straightforward to determine gender. In other cases, we relied on images of the scientist from web searches and, in a few cases, just the name of the scientist. The most difficult part of the process was often determining the original team membership, without including postdocs, participating scientists, and other additional scientists. 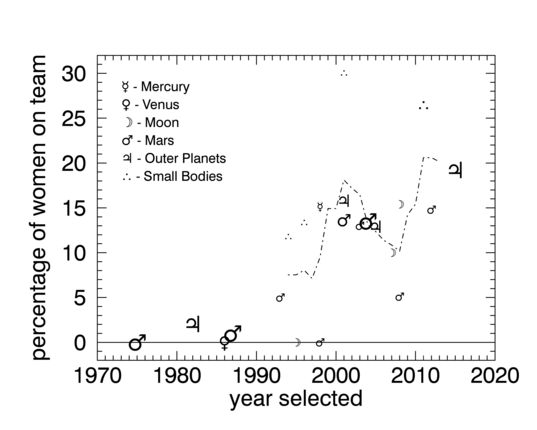 Percentage of women selected for science teams per year

The above plot shows our results. The x-axis indicates the year the science team was selected, which the y-axis shows the percentage of women selected. The symbol type shows the destination of the mission while the symbol size indicates the size of the mission (flagship, NF, or Discovery-class). The dotted line shows a running average over a six year window. In the mid-late 1990s, participation by women grew dramatically, from less than 5% to more than 10%. However, the average has remained remarkably consistent since the early 2000s, hovering near 14%. Missions that study small bodies have had the greatest participation of women on their science teams. 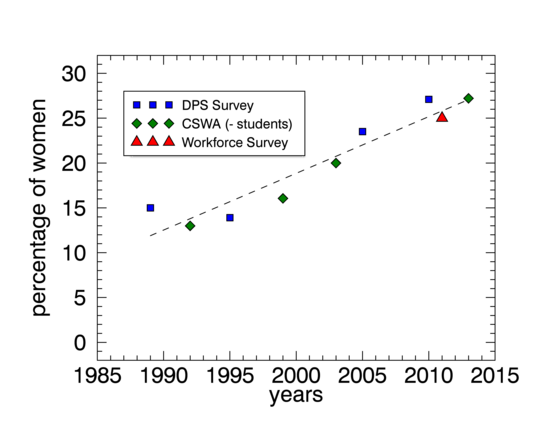 The above plot shows the number of women scientists in related fields as a function of time. The only measurement we were able to find specifically for planetary scientists was from the 2011 planetary workforce survey (red triangle). The blue squares show results from DPS surveys (1, 2; although not all planetary scientists are member of DPS). The most detailed survey of women in astronomy was completed by the Committee on the Status of Women in Astronomy (CSWA). The green triangles show the percentage of women non-students. The line shows a linear fit to all the data and predict that the field will reach parity in 2049. 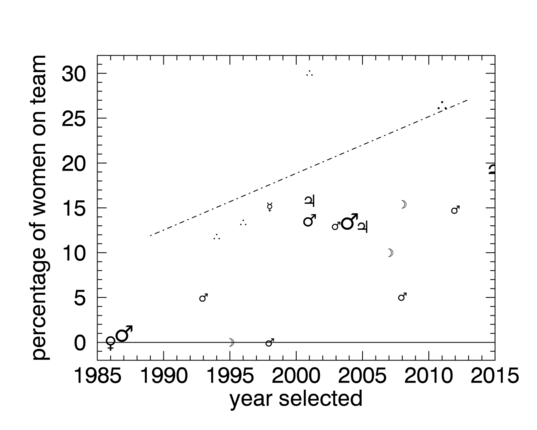 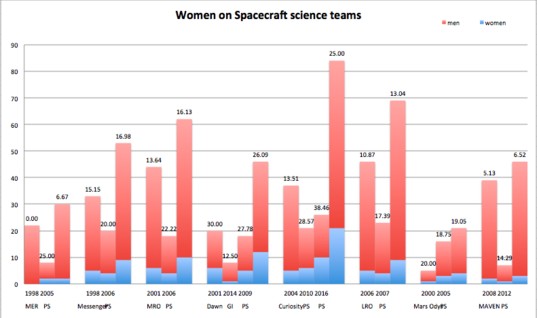 While our earlier analysis concentrated on the originally selected teams, we have recently examined Participating Scientist and Guest Investigator programs. These programs are run through NASA ROSES calls much like R&A grants and all selections are available on NSPIRES. We examined the names of the selected scientists and determined their gender in the same way as for the original teams. The above bar graph shows results for several missions. The blue bar indicated the number of women in the selection which the red bar the number of men. The number at the top of each bar indicates the percentage of women selected. The leftmost bar for each mission indicated the originally selected team while the rightmost bar indicates the total team that resulted from the original selection plus the additional members. We will be presenting these new results at the 2016 DPS meeting.

So, what does this mean?

While the percentage of women participating in astronomy and planetary science appears to be increasing their representation on spacecraft science teams has not been commensurate. For many planetary scientists, being involved in a spacecraft mission is the highlight of a career. With the percentage of women in such missions remaining relatively stagnant over the last ~15 years, the expertise of many qualified women scientists are not being utilized by the scientific community. It is interesting that Participating Scientist and Guest Investigator Programs, which are usually determined by a review panel, are doing a demonstrably better job utilizing this talent pool as compared to the original teams, which are often determined by a single Principal Scientist. It will be interesting to compare the percentage of women selected to the percentage that applied. While this information is not currently available, NASA NSPIRES recently began requesting the proposers identify their gender, enabling comparisons of this sort in the future. I very much appreciate those individuals within NASA who worked so hard to enable the NSPIRES system to gather this important information.

What do we still need to do?

Participation of women on spacecraft missions is still not equivalent to men in the field. We need to do a better job of utilizing their scientific expertise. Furthermore, while the percentage of women in the field appears to be rising, it appears to be increasing linearly and, if the trend continues, women will not reach parity for more than 30 years. Finally, as the initial photograph indicates, there are very few women of color involved in spacecraft missions. While our study did not determine the race of spacecraft science team members, a quick look at recent teams indicates that we have a very long way to go to get more scientists of color involved. 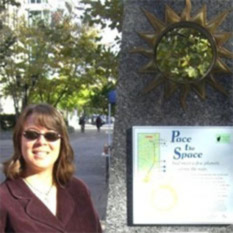 I'm surprised not to find the Cassini mission in this last chart. I don't know how strong the %age of women with this outstanding mission is, but its leadership includes two, Carolyn Porco and Linda Spilker. Overall, the way it looks things must be far from perfect, but, maybe I'm naive, the tendency certainly looks better than in many other regions of work. I certainly could name quite a number of women who I'd very much like to see heading NASA in the future.