On May 2, the European Space Agency (ESA) and Roskosmos admitted the inevitable—the launch of the joint ExoMars-2018 project will have to be postponed for two years to 2020. The flagship planetary mission for both space agencies envisions the landing on the surface of Mars of a Russian-built platform carrying the 345-kilogram European rover with a suite of sophisticated instruments designed to search for signs of past or present life on Mars.

The latest slip puts the ExoMars rover almost a decade behind the original schedule, prompting plans within ESA to rename the mission ExoMars Rover and Surface Platform (RSP) to avoid the reference to ever-changing launch dates. 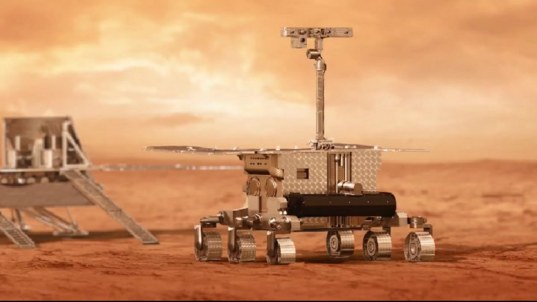 Artist's rendering of ESA's ExoMars 2020 rover on the surface of Mars.

However, besides giving engineers some breathing room, the latest move by itself does not resolve a multitude of financial, political and technical problems facing the project. In fact, the delay is guaranteed to further balloon an already overstretched budget, mainly because the agency will have to keep a large team of engineers on the payroll for an extra two years. Sources within the industry estimated that the 1.2-billion-Euro project (a number that includes both the ExoMars rover and the Trace Gas Orbiter, currently on its way to Mars) could still need 200 to 300 million Euro to launch the rover in 2020.

Jorge Vago, a leading ExoMars scientist at ESA’s Directorate of Science and Robotic Exploration, protested these figures as too high. However, he added that the project team had been negotiating with the industry to “firm up the development cost estimates.” In other words, ESA and its contractors are yet to agree on the final cost, and, according to multiple sources, the agency had so far been offering considerably less money than the industry was asking for to finish the job. The final sum is not expected to be finalized until the end of June, when delegations of various space agencies in Europe gather for an ESA Council meeting in order to decide how to proceed.

At the same time, ESA faces an even more difficult task of convincing European politicians to pony up all that extra cash to pay for the rest of the project beginning next year.

Industry insiders say that an upcoming landing on Mars of the Schiaparelli module could be an important morale boost for the beleaguered project. Conceived as an engineering dress rehearsal for the ExoMars rover, Schiaparelli was successfully launched in March along with the Trace Gas Orbiter. The joint spacecraft will arrive in the vicinity of the Red Planet on October 19, when Schiaparelli will separate from the TGO and make a risky plunge into the Martian atmosphere. This milestone will take place just weeks before European ministers responsible for the continent’s space budget will meet in Luzern, Switzerland, in December. 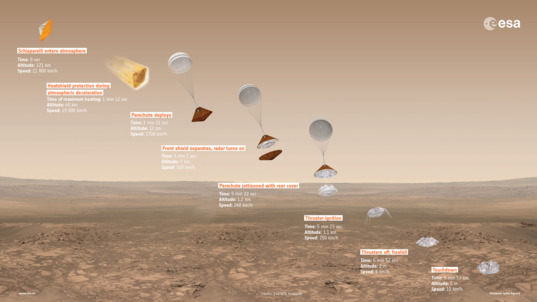 According to industry sources, the keys to the financial bailout of the project will be in the hands of Italy, which might be required to take from 30 to 40 percent of the financial burden in the ExoMars project. The issue is complicated by the fact that Italians were not happy with the latest appointments within the agency’s top brass made by the new Director General, industry sources said. Other contributors, like UK and Germany, will also be expected to chip in.

Unfortunately, even with the secured budget and the extra two years for the development, the ExoMars rover will still face serious engineering problems. By far the biggest of them is the lander, for which Russian firm NPO Lavochkin will provide the general structure, engines and the thermal protection system.

The Russian and Soviet experience with Mars exploration is notoriously unlucky, giving critics plenty of ammunition to call the Lavochkin-supplied lander the Achilles' heel of the ExoMars project.

However, Vago countered that argument with the fact that some of the most critical systems of the lander, which make or break the complex descent to Mars, will be provided by ESA based on the extensive experience with the Schiaparelli.

"ESA supplies the computer and the software, the antennas and the transmitters, most of the avionics, the parachute system, the inertial measurement unit [gyroscopes and accelerometers for the landing] and the Doppler radar [also used for the landing]," Vago says, "We also provide engineering support with the aerothermodynamics design and the landing sequence testing, simulations, and validation. Many of these hardware and software contributions are either copies of what we have used on the Schiaparelli or adaptations of these systems."

Unfortunately, the price for the heavy European involvement into the Russian lander design is a truly byzantine management structure of the ExoMars project. 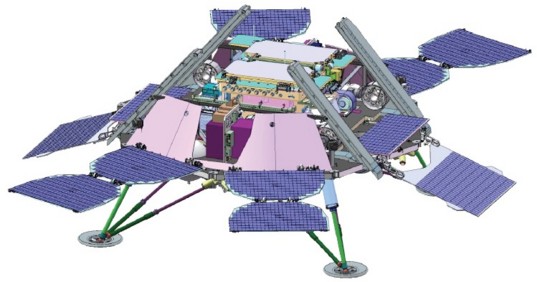 The Russian landing stage and long term science station with the European rover on top prior to its deployment.

"Interfaces are complicated," Vago says, "Every time Lavochkin changes something, our industry needs to check whether it has any consequences for the parts we will contribute and vice versa.  If we modify the size of an [avionics] box, they have to verify that it still fits on the lander and recheck the routing of all the harness."

In the past, different space agencies often provided instruments, modules and systems to each other, but no other planetary exploration project has ever had such a multifaceted and intertwined cooperation between Russia and its partners at the component level.

To further complicate the management situation, at the end of last year ESA was restructured to merge the Directorates for Science and Human Space Flight into a single Human and Robotic Exploration Directorate, dropping ExoMars into the lap of a newly formed directorate without a well-defined budget or expertise in robotic missions, critics said.

As a result, the project is moving forward slower than expected, but, hopefully, the newly-added two years could save the day.

"Our efforts to try to keep to the 2018 launch were pushing us more and more in the direction of having to plan many activities in parallel, increasing risk," Vago said, "The 2020 opportunity allows to rebuild margin in the project schedule, and to ensure (that) the sequence of tests remains logical. For example, you build and test the Qualification Model [first] and only thereafter you build the Fight Model," Vago explained.

In the next two weeks, ESA, Roskosmos and the industry are expected to develop a new schedule, designed to bring ExoMars to the launch pad on August 5, 2020.

To be fair, problems can arise in any space mission where there are a number of space agencies or contractors involved, e.g. the recent postponement of NASA's InSight Mars lander because of a problem with an instrument supplied by the CNES French space agency. It is always better that there is a postponement until the next launch window rather than risking the destruction of the mission.

@Tim: So multi-nation space missions cause more problems than they are worth? PS Can somebody PLEASE turn off the &$%$^(*& spellchecker for the verification field? It is pointless having spellchecking on a field where ALL the sequences of letters you type in are NON-words!

@Stephen Please be assured that I am fully in favour of cooperation and coordination between space agencies. Indeed, I'd like to see more of it. The polite intention of my point was that sometimes rubbish happens and while it means a delay, it's not a long term issue because there'll invariably be another launch window. Hope that clears things up.