After months of delays, the Russian government finally approved the nation’s 10-year space program worth 1.406 trillion rubles ($20.5 billion) last week. Officially known as the Federal Space Program 2016-2025, or FKP-2025 for short, the document was in development for about two years and spent many more months in deliberations among various federal agencies involved in space activities.

The final package includes annual projected budgets for most civilian space projects and the timeline for their implementation. FKP-2025 supercedes the previous 10-year plan, which covered Russian space activities from 2006 to 2015.

“This is a sizable program, but we need such large undertakings even when it is not all easy in the economy,” said the Russian Prime Minister Dmitry Medvedev at the conclusion of his cabinet meeting on Thursday, March 17, where the program got a formal approval. 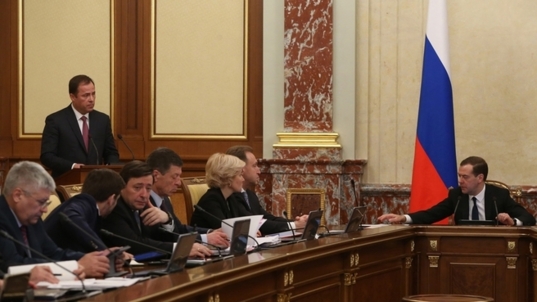 Presentation of the Russian space budget

Roskosmos head Igor Komarov makes a presentation of the FKP-2025 at the Russian government meeting on March 17, 2016.

The final space budget is a shadow of its 2,315.3-billion ($56.4 billion) draft proposal circulated in the spring of 2014, before falling oil prices, the annexation of Crimea, and the resulting western sanctions sent the Russian economy into recession and forced Moscow to cut spending across the board. The very fact that the program was approved two and half months after the first year it covers had already started is evidence of tough battles the Russian space industry had to fight for each line item in the document.

Postponed were ambitious plans to build a giant super-heavy rocket, which would enable Russia to land its cosmonauts on the Moon by the end of 2020s and begin building a permanent base there. Even a relatively modest proposal to partially switch the new-generation Angara family of rockets from kerosene to more potent hydrogen fuel had to be delayed, potentially undermining the traditional Russian competitiveness on the international market of launch services. On the plus side, the cost-cutting apparently prompted Roskosmos to streamline its large and disparate fleet of launch vehicles from eight to just two families: Soyuz and Angara. Only six variations of these two types of rockets will remain instead of current 12.

According to the head of Roskosmos Igor Komarov, who outlined the program during the government cabinet meeting, the Russian orbital assets will grow from the current 49 operational spacecraft to 73 by the end of the projected period in 2025. (For comparison, the Spring 2014 draft of FKP-2025 aimed to buy 180 spacecraft.)

Both the government officials and Roskosmos stressed that the first priority for the program will be communications and broadcasting satellites. According to Komarov, the Russian constellation of communications satellites will grow from 32 to 41 under the projected funding. The bandwith of the communications channels carried through space was promised to increase 1.3 times and broadcasting capabilities would grow 3.3 times, officials said. In the meantime, Russia’s “eyes in the sky” and other remote-sensing satellites will multiply from eight to 23 during the same period.

In the field of human space flight, the Kremlin still promises to complete the assembly of the Russian segment of the International Space Station, which has remained unfinished since the turn of this century. Up to this point, a total of three new modules were slated to join the ISS: the Multi-purpose Laboratory Module, MLM; the Node Module, UM; and a new-generation laboratory and power supply facility dubbed NEM-1. However, during the approval meeting, Komarov stressed that only the modules in “high degree of readiness or under assembly” would be launched by 2024, when the ISS is to be deorbited. Such phrasing seemingly applies to the MLM, and the UM, but not to the NEM-1, which currently exists only on paper with a launch date projected for 2019. Also peculiar, Komarov mentioned that all new modules would be “upgraded” to function as an independent new Russian space station after the retirement of the ISS. Although such plans are not new, this statement could hint about further delays in the launch of the MLM and the UM modules until now expected in 2017 and 2018.

Also, according to the approved strategy, Moscow still remains committed to shifting human space launches from Baikonur in Kazakhstan, to the new spaceport in Vostochny in the Russian Far East. Such a move would require a new launch pad for the human-rated version of the Angara rocket. The new facility is promised to be ready in 2021, even though at this point, the site is no more than a clearing in the taiga. Even more challenging under the current budget crunch will be to complete the development of the new-generation spacecraft to replace the Soyuz capsule. The new ship was designed primarily for deep-space missions, such as expeditions to the Moon. However, while all the big rockets remain on the ice, Roskosmos will have to be content with destinations in Earth orbit or, more likely, to postpone the project until better days.

Komarov promised to launch the uncrewed prototype of the Soyuz replacement in 2021 and to send the first crew to the ISS aboard the new ship in 2023. The Moon landing still remains the strategic goal of the Russian human space flight but with a tentative launch date in 2030, or five years beyond FKP-2025.

Still, Roskosmos pledged to go ahead with its robotic lunar probes, which include progressively more complex orbiting and landing missions. The ultimate goal of the project is to return soil samples from the polar regions of our natural satellite in the hope of scooping possible traces of lunar ice. No launch dates for these missions were mentioned during the approval meeting. However, given the likely delay of the flagship ExoMars-2018 mission to 2020 and its highest priority in the program, all lunar missions will likely be pushed well into the next decade.

A pair of astrophysics research satellites also made it into the program. Vladimir Fortov, the President of the Russian Academy of Sciences, which formulates Russia’s space science program, assured that fundamental science projects had not been significantly cut. He clearly referred to the Spektr-RG X-ray observatory and the Spektr-UF ultraviolet telescope. They are scheduled for launch in 2017 and 2021, respectively.

However, even after all the latest budget cuts, the Russian space program is not out of the woods yet. Because FKP-2025 is a long-term roadmap, not an actual budget, it is completely dependent on the performance of the Russian economy and on the amount of money in the treasury. Moreover, due to heavy dependence on imports of sophisticated electronics and other components, many Russian space projects are particularly sensitive to the currency exchange rate. For example, the originally proposed 10-year budget at the amount of 2.3 billion rubles ballooned to 2.8 billion in just few months of 2015, as a result of the ruble’s devaluation on the international market.

Those who want to know what is going to happen to the Russian space budget next, better watch oil prices and the value of ruble.

In an interview last year on the sidelines of the International Astronautics Congress, IAC, Komarov told me that the real space budget for Roskosmos is projected for just three years ahead and approved by the Kremlin only for the following year. As a silver lining, this also means that in case the Russian economy improves in the years to come, the space budget will grow accordingly. Banking on the better days ahead, FKP-2025 reserved an entitlement for an additional 115 billion rubles after 2022.

Mr. Zak, you mentioned that "Only six variations of these two types of rockets (Angara and Soyuz) will remain instead of the current 12." Could you please elaborate on what those vehicles will be exactly? I can wager a guess of: Soyuz 2.1a, 2.1b, and 2.1v, as well as Angara 1.2 and A5. This however is only 5. Do they plan to keep the Soyuz FG rocket in service, or is it perhaps Proton M you are referring to? Pardon the detail, but I am curious about how Russia plans to consolidate its fleet in the coming years. Thank you!

Brent - Andrey Kalinovskiy, general director of Proton manufacturer Khrunichev State Research and Production Space Center stated last week (March 17) that the Proton launcher will fly until 2024/2025 -- at which time it will be retired (once Angara 5 is operational at Vostochny Cosmodrome). http://spacenews.com/russia-aims-to-retire-proton-in-2025-as-angara-takes-over/ Mr. Kalinovskiy further stated that there will be three (3) basic variants of Angara: One with a single core stage (Angara 1.2); an intermediate version with three core stages bundled together (Angara 3); and the heavy-lift variant with five cores (Angara 5). Proton brochure http://www.ilslaunch.com/sites/default/files/pdf/Proton_Brochure_2014.pdf Angara 1.2 Fact Sheet (operational at Plesetsk Cosmodrome) http://www.ilslaunch.com/sites/default/files/pdf/Angara-12-Fact-Sheet-Mar-2016.pdf === As far as Soyuz launcher family, you will see further simplification (digital avionics, fabrication) and standardization (engines, drop 4 boosters, interfaces). I would expect only 2 variants (Fregat, Breeze) of the Soyuz 2, by 2024. https://en.m.wikipedia.org/wiki/Soyuz_(rocket_family) The Soyuz 2 family, without strap-ons (Soyuz 2-1v) will use surplus Kuznetzov NK-33 engines and then migrate to the NPO Energomash RD-193 engine or a joint-venture engine with Kuznetzov (recent Energomash investment). https://en.m.wikipedia.org/wiki/Soyuz-2-1v

Hi Anatoly, Was there any mention on funding for Venera D?

Anatoli, Do you know that Vladimir Fortov, President of the Russian Academy of Sciences, is an ally of eternal and ageless once-in-two-terms Russian President Vladimir Putin? If yes, then he hoped he, like others at RAN, would gain eternal life so questions of elections, appointments and successors will flake away naturally like crumbling plaster. Also, Fortov is a criminal who encourages corruption, crime and embezzlement in secret so funding of space missions may suffer.