The Competition for Dollars

What is NASA's main competition for funding within the federal budget? It's not what you think.

This is the first in a series of posts that will examine NASA and its science budget within a historical context. Jason Callahan will explore what NASA delivers for for the (relatively) small amount of money that it spends, what challenges it faces in securing funding for the future, and how planetary science has fared when it has received robust funding in the past. I hope you enjoy it. --Casey Dreier, Director of Advocacy 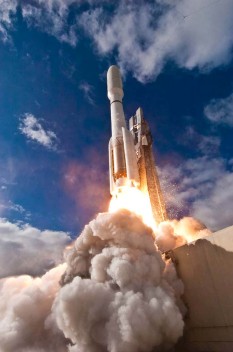 No Bucks, No Buck Rogers

A launch (in this case, of the Curiosity rover in 2012) is the culmination of years of work on behalf of scientists and engineers, requiring steady funding and support by NASA and the government. Without steady funding, missions suffer.

One of the most common misperceptions about NASA is the amount of money the U.S. government spends on the agency. NASA competes for funding with all of the various entities that make up the federal government, but the agency is now confronting larger economic trends over which the space community has little control.

It’s worth looking into this topic a bit to help understand just what we have received for our investment in NASA over the past fifty years, and why we should continue to invest in space science. In this series of posts, I hope to do so in a way that clearly explains NASA’s position in the federal government and the U.S. economy, and hopefully shed some light on the nature of the budget challenges facing planetary science today.

The Federal Budget Since NASA’s Formation, in a Nutshell

So, what is the U.S. economy, and just how big is it? For those of you who remember your high school civics classes well, please bear with me.

The economy is the marketplace in which all forms of production (from manufacturing to services to knowledge) are distributed, traded, and consumed, which is a very abstract concept. I’m sure there will be several economists out there slapping their foreheads at this overly simplistic statement, but the economy basically represents all of the ways people do business with each other. The most common way to measure the economy is by calculating the gross domestic product, or GDP. This is essentially (and again, apologies to the economists) a measure of the value of all the goods and services produced in a year. So, looking at the U.S. GDP since the formation of NASA gives us a good idea of the size of the U.S. economy and how it has changed. 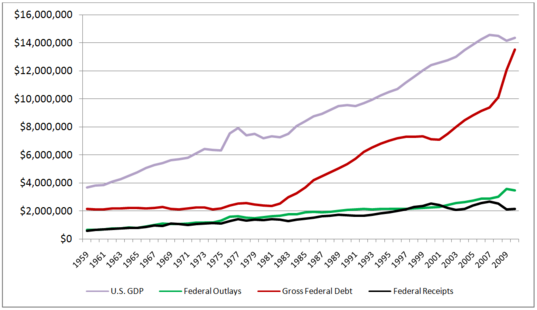 In millions. Adjusted to constant 2010 dollars.

The purple line in the above plot shows that U.S. GDP has grown from just under $4 trillion in 1959 to a little over $14 trillion in 2010. So, the U.S. economy is now three and a half times as large as it was fifty years ago. Many factors account for such rapid growth, including our increasing population, the vast increase in international trade, and the high value placed on U.S. goods and services.

This leads us to one other trend that places increasing pressure on federal resources: debt. Federal debt is money borrowed by the U.S. government to pay for expenditures exceeding the amount of money raised (primarily) through taxes. Beginning in the late 1970s, government spending exceeded income consistently, and the federal debt grew at a rate matching—and often outpacing—the rate of increase of GDP. The result of this expanding debt is an increasing cost to the federal government each year to pay just the interest on the debt, without bringing down the principal. The cost of the interest on U.S. federal debt in 2010 was $414 billion. I have no desire here to wade into the politics of the debt, I only want to highlight the increasing impact it has on the competition for federal dollars.

Not All Spending is Equal: Discretionary vs. Mandatory

The federal budget can be broken into two categories: mandatory spending and discretionary spending.

In millions. Adjust to constant 2010 dollars.

NASA Is Discretionary and Competes Every Year for Funding

The final plot shows NASA’s budget line in comparison to the non-defense discretionary budget (the one that Congress approves every year). You may have to squint. 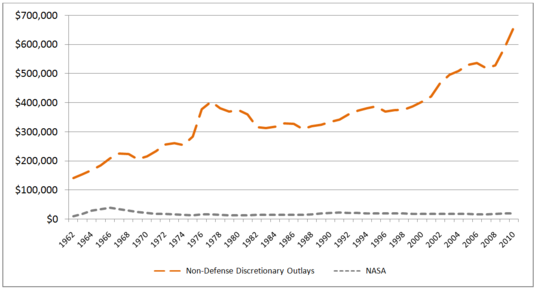 Discretionary spending is what Congress approves each year. All numbers in millions. Adjusted to constant 2010 dollars.

NASA has always competed for funds with all of the other entities of the federal government, but as we have seen in the figures above, the agency faces growing, long-term economic trends over which the space community has little control. As mentioned above, in 2010, the interest on the federal debt amounted to $414 billion, roughly twenty three times the NASA budget that year. This is not to suggest that the United States would spend more on NASA if it carried less debt, but it shows that an increasing debt load places a significant burden on limited resources. The United States also faces mandatory spending requirements that are increasing far faster than the growth of the federal budget, leaving the discretionary budget as the only place to find funds. Given the combined pressures of increasing federal debt and mandatory spending, it’s clear that NASA has not had to compete for funds within a budgetary environment quite like this before.

But don’t despair! In my next post, I’ll discuss the unique value of NASA and its planetary science activities, how they contribute to the U.S. economy, and why I think the people in the U.S. planetary science community are the best selling point for taxpayer investment in space science.

The text might need proof reading concerning what is millions and what is billions. US government economic outlook is very grim. The dollar will not remain the world currency for ever, it is a relic from 1944 when the US dominated the world economy. And when the FED can't just print trillions of USD out of nothing and find international demand for it, interest rates will increase to about 8% or so which balances savings with borrowing. That will not only multiply interest cost several times over, it will erase what many today believe is real values, such as savings and house prices.

Arbitrary: We've fixed the errant use of "millions," thanks for catching that.

oh great another doomsday prophet. Please not here. This is a scientific community. These comments have no place here. Take them somewhere else. Thank you.

@Basti Why do you think that the global standard of reserve currency changes? Why did the USD replace the GBP, for example? Without a basis of demand for a currency, it will be terminated as a global reserve currency. And all borrowing is simultaneously saved by someone else (or a temporary illusion of imaginary wealth), and the FED will not be able to borrow the rest of the world's savings for ever. This is all completely logical and scientific. What will happen when the interest rate costs is more than half of the federal budget, in order to balance American's savings with American's borrowing? Writing off the debt, the other side of which is most of all US pension funds? NASA and NSF were the first things which were shut down during the sequester. In a few years NASA will exist no more.

Thanks for this series! Like other readers, I often come to the Planetary Society blog for a reprieve from politics and negative news in general. However, I am also very serious about supporting space exploration, so I want to understand how the federal budget impacts progress. Thanks again.

@Shaen - Thanks for your interest! I recognize that this can be a dull topic, so thank you for reading. I too wish that politics played no role in space exploration, and I totally understand your exhaustion with the news. That said, keep in mind that an email to your congressional representatives every now and again is a powerful thing. :) I hope you enjoy the rest of the series, I hope you stay engaged, and thanks for the support!

If Hubble's plot is correct, Gross Federal Debt is expanding faster than the distant universe

From The Economist Jan 14 2014 What is quantitative easing? To carry out QE central banks create money by buying securities, such as government bonds, from banks, with electronic money that did not exist before. Several rounds of QE in America have increased the size of the Federal Reserve's balance sheet - the value of the assets it holds - from less than 1 trillion dollars in 2007, to more than 4 trillion now. Why can't the Planetary Society not advocate to use some of that "electronic money that did not exist before" to fund space exploration? Here is my pitch Move the "electronic money that did not exist before" to Mars. The difference between a day and a sol allows time to solve the debt crises. The Deep Space Network would have the keys to the safe, and JPL would be running the Federal Reserve. "Halleluoooooooo-jah" Lenard Cohen

If we are going to keep up with the Kardashev's we need science, technology, engineering and money.

With time, space, and electronic money that did not exist before, Maxwell's equations can be used to balance the budget. A day at a time